September is the Hunting Moon for man and begins another kind of hunting for squirrels. It is a little early for most nuts but the hunting of toadstools sets in about now, and they know which are good. How? That is what nobody knows. Men cannot distinguish the poison ones by touch, smell or taste, but the squirrels seem to do so. Many a time I have seen toadstools stored in limbs for winter use but never have I seen one of the poison kind so laid away. How do the squirrels know?

Bird nesting in Autumn is good sport and quite legitimate. We gather birds’ nests of the most beautiful kind and do it knowing that we are doing no wrong. The smaller birds, as a rule, do not return to the nest of a past season. This, of course, refers to built nests in twigs or branches. If you have ten types of nests, say the robin’s mud nest, the vireo’s hung nest, the goldfinch’s cotton nest, the humming bird’s dainty thimble nest, a Phoebe’s moss nest, a yellow-bird’s floss nest, a sparrow’s rag nest, an oriole’s bag nest, the cuckoo’s stick nest — you have a fine lot of Woodcraft trophies, good subjects for pencil or photo and you have wronged no creature in gathering them.

Did you ever make an Indian pot? We had great sport in making some at Camp Chief Ouray. It is one of those Woodcraft stunts that need not cost one cent of money. It needs only freedom of the Woods.

Get a lump of clay, preferably yellow. Work it clean of stones and lumps. Shape it into a saucer, let it dry for an hour, then build up the walls with wet clay. Smooth it off, let it dry thoroughly, then paint your camp symbol on it with soot and water; when this is dry keep it in a hot fire for a few hours and you have a good pot, provided you do not cool it too quickly. One fine pot was roasted and ready and whole, but instead of giving it two or three hours to cool I took it out and in a minute it cracked in twenty pieces.

Under This Department Questions Will Be Answered from Time to Time. 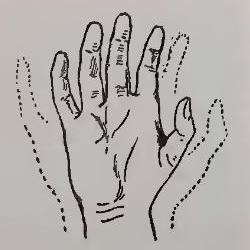 Yes, We recommend that emphasis be laid on working for the Pathfinder rank for the first few months rather than working for coups.

The requirements for the three ranks were worked out believing that the material contained and required, constituted a general training which all members should have before they begin to specialize.

We suggest that you plan to have each member complete at least the Pathfinder’s requirements between now and Spring. It may be well to encourage coups when the Pathfinder rank has been won.

It scarcely need be said that the Woodcraft League was not formed as a corrective agency, nor yet to add to the gray matter of stunted intellects, but Woodcrafters will learn with interest that experiments are being made along both lines, a start having been made at two centers during the summer.

Through the interest of Mrs. E. C. Bodman, chairman, Educational Committee of New York University, two tribes have been organized on Randall’s Island by Lina D. Miller, Woodcraft Girls’ Work Director, the members of which are children under treatment in the Children’s Hospital and Schools conducted under the supervision of the New York City Charities Department, with Miss Katherine Houlihan, the Educational Supervisor, as leader. A Council Ring was built by the children with stones gathered from the shores of Hell Gate, and with the cordial co-operation of the Superintendent, Dr. W. B. Cornell, Woodcraft has been incorporated into the curriculum of this institution. The children are all sub-normal, in some (or several) mental departments, and it is hoped that the appeal to instincts and habits of the open life will gradually develop and strengthen the youthful patients’ mental powers.

The Connecticut State Industrial School at Middletown has a large population of girls between fourteen and twenty, and Miss Penniman, the new head of the school, seeking a means of focusing the interests of the girls, asked a demonstration of Woodcraft League work. There was enough mystery and romance about the presentation made by Miss Miller to strongly attract the girls in large groups, and the first impression is that Woodcraft will prove a moral rallying point for a large number of the girls, all of whom have been untamable under home conditions. Several instances of the yielding of stub-born wills were noted in the first few days, and reports show that the interest is unabated after several weeks.

All Woodcraft Guides and adult members living within the vicinity of Greater New York have been invited to a Guides’ Council, to be held at Van Cortlandt Park, Saturday afternoon and evening, October 6th.

The evening will be given over to a Guides’ Council. One of the most attractive features of the program will be an address by Captain A. Radcliffe Dugmore, of the King’s Own Yorkshire Light Infantry, who was “gassed” in the Battle of the Somme, and had charge of the Scouting and Intelligence work of his brigade. He will speak on “Woodcraft in the World’s War”.

Captain Dugmore is already known as an authority on outdoor subjects, and has been secured to give this lecture preliminary to a lecture which he will give in Carnegie Hall, Tuesday evening, October 23rd, on “Fighting It Out”.

This is one of the rarest opportunities that will come to the members of the League. 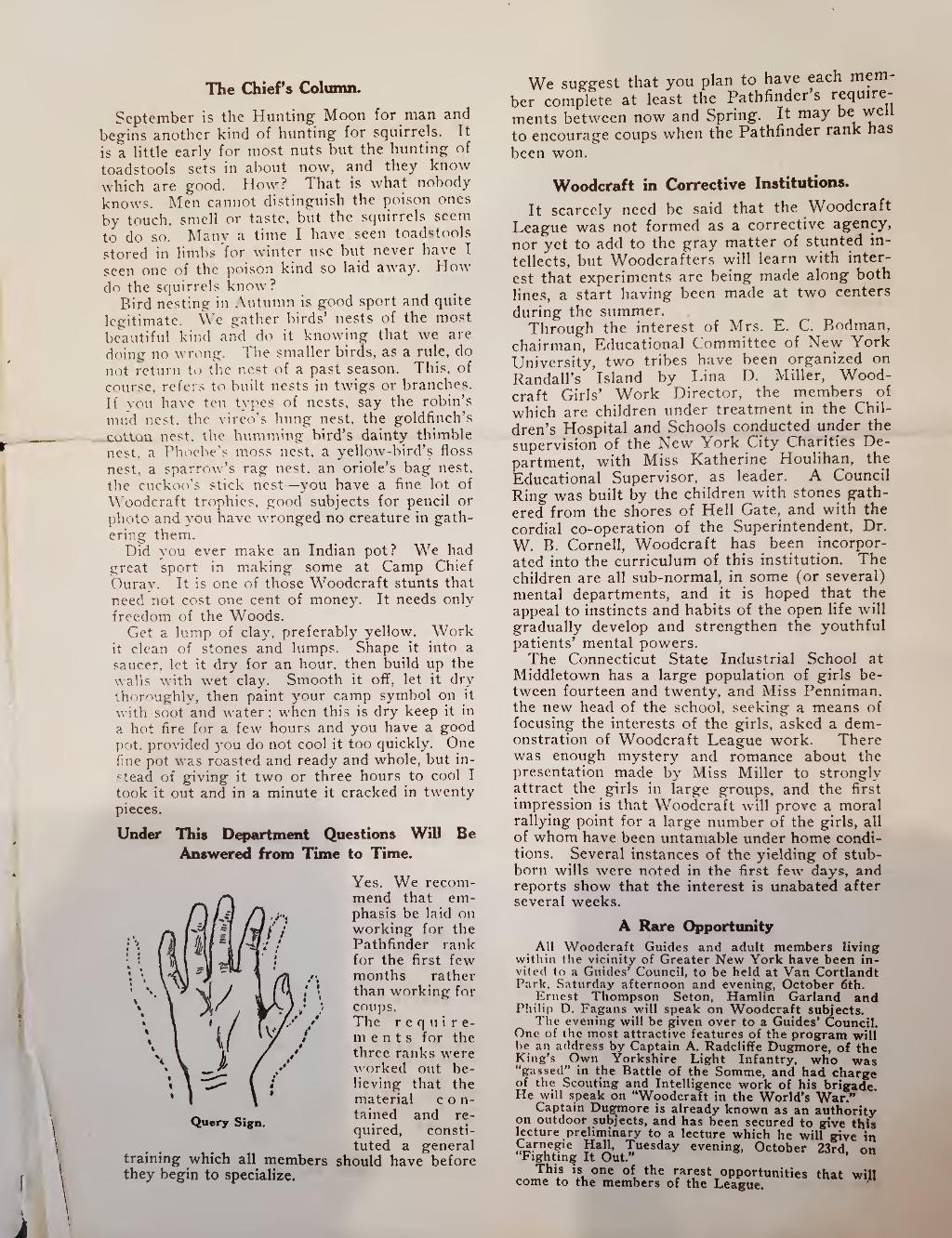