The Totem Board says “How Kola” to the many members of the Woodcraft League — the guides, the members and the contributors.

You have had a share in these days of beginning. You have seen an idea grow into shape and that idea taking form in many places. In the midst of the turmoil of war and world stress you have shown your belief in the value of character and the part of the Woodcraft Program in the building of character.

We are proud of the part the Woodcraft League has played since its organization and believe that we now enter a new era in our history. So now comes the Totem Board. It hopes first of all to be of help to the guides in the successful conduct of the local tribe work. It hopes to serve the members by acquainting you with the more important things of Woodcraft and to keep you generally informed as to the progress of the League and of the worth-while things which we may all do in the outdoors.

The Totem Board will measure its success by the service it renders you.

May we have your co-operation in suggestions, in news of the work and in articles telling of Woodcraft?

It will be published from time to time as occasion warrants, and as the members feel it is valuable to them.

To the Woodcraft Guides and Members:

I have just returned from establishing Woodcraft in a new camp in the West. There were about 100 boys, some of them belonging to other organizations, but all were seeking for new activities, There seemed a big void, an unsatisfied hunger for something else. What was it?

One small boy, who always wore a big sombrero and a leather belt with an empty pistol holster in it, unconsciously voiced it for the rest — as he said sadly, “I was born about two generations too late. There isn’t any wild West now. There is no frontier. Soon there will be no cowboys. All the things I like are gone.”

In other words, he hankered for romance, for adventure, for heroic days and opportunities and thought they were gone. I said to him, “Your father used to feel the same way about earlier times. Sir Walter Scott, 100 years ago, felt and wrote this way about the feudal days — and now we know that he was mistaken, There is just as much romance and adventure in our land as ever, even if it takes a new color and circumstance.”

Then I said: “The Council to-night may open your eyes.”

That night by the Council Fire, when scout reports were called for, he learned many chapters of the romantic life about us for those who have the eyes to read them. He heard of a boy who had that very day met a coyote; of a boy who had seen a beaver dam at a place where for 50 years beavers had been unknown; be learned of two who had met a deer in the morning, and heard a tale of recent adventure in a city, in which lives and fortunes were risked or lost in an affair of one hour. One boy reported that he had fed twenty nuts to a gray squirrel in the City Hall Park of his town. The squirrel had “eaten the first three and planted all the rest; probably so they’d grow. But I did not tell him that they were roasted peanuts and couldn’t grow, because that might have spoiled his good habits.”

Another told of finding a blaze on a tree — the broad arrow, or three lines like a pyramid, with an upright in the middle. In this case it was made by a forester, but other boys said they had seen it in town on pavements or on buildings, and the Guide informed them that it was an old sign used all over England and America for “officially fixed points”, dating back to the Druids, who first used it in a religious sense.

One Woodcrafter, who was sent for the stuff to make rush baskets, reported trying a lot of flags and found them useless because they broke so easily, but on second trial, with cat-tails, produced a good, strong basket.

A keen-eyed boy, with the instincts of a hunter, said he had found some strange, almost human, tracks in the mud by the brook, and showed a drawing of them, which left little doubt that a big racoon had prowled in the night to feed in the shallows and eddies.

Another had made a good observation without leaving cam, for he had that day taken from the cat a deer-mouse, to whose breast were still clinging her four young ones.

A new arrival, who was in town some days before, had seen a motor car driven at a re ess rate, and with true Woodcraft instinct, had noted down its number, Next morning he had learned that it contained a burglar trying to escape from the police.

In the general talk by the Guide he heard of the vast areas on the map of America as well as Africa and Asia that are marked “unexplored”, and last of all he heard of heroism without human parallel being hourly evidenced on the battlefields of Europe today.

No indeed, the heroic age is not passed. We may well hope that it soon will be gone in the sense of war, but the romance of the woods and wild life will continue as long as we have woods and the wisdom to get together in the wish to enjoy them; and the big human romances of the towns are with us all the time, from the clay of the streets through the tenement houses up to the stars — all you need is Woodcraft eyes to see them. 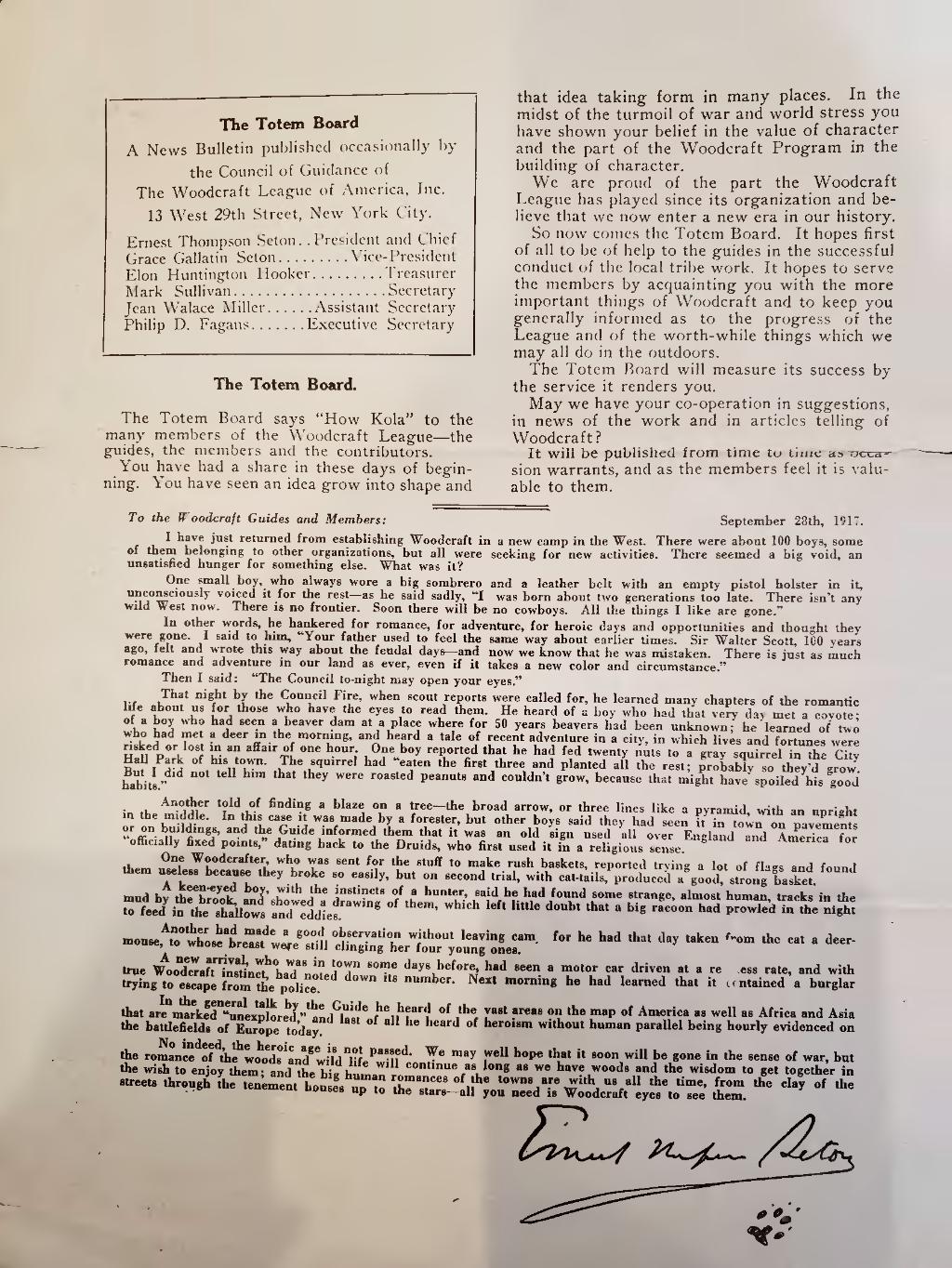