There’s a little frost in the air these days. We walk with a little more vim and we feel more keen to be up and about than we did along about the middle of summer.

Everybody feels ambitious just now. Why not use this ambition along Woodcraft lines? Every test reveals the completeness and worth-whileness of the Woodcraft Program. The only thing to be done is for you to know the possibilities and then make use of them.

Make a good beginning. Get your tribe together at once. Make sure that they realize what Woodcraft means, tell them of its spread and of the men and women who are backing it — make each one proud to be a Woodcrafter. Have them wear their badges either on an armband or a Woodcraft suit.

As you begin, emphasize the importance of decorum in council — have the members take pride in doing the thing properly. Woodcraft says that the doing of small things well is a big part of life.

Use these wonderful fall days for week-end outings and hikes — give the boys and girls an opportunity for making their own fires, cooking their own food and, most of all, get their interest in the trees and flowers as the summer season ends.

The nights, too, should mean more as the days become shorter. How many star groups or constellations do you know? A few minutes’ reading and observation on your part will open new vistas for yourself and new worlds for your members. Collins’ “Book of Stars” is a good one, but most important of all, get the “Serviss’ Star Map.” Every tribe should own one.

Decide now to have at least three grand councils and begin at once to plan for them. Use these councils as opportunities to train your members in the things they ordinarily would not do — particularly the dramatic dances, songs, pantomime. Make sure that you are putting into their lives interests which will be worth while as long as they live and that your grand council is a very fine presentation rather than a collection of ordinary stuff. Remember always the Woodcraft Plan of using the interests of their lives to give them pleasure.

The Woodcraft Manual we believe without doubt is the must valuable book — next to the Bible — any boy or girl could have. Every one of your members should have a copy. See to it that they do. If the individual cannot take care of the matter have the tribe handle it.

Hold some of your councils outdoors. It makes the thing real. Several tribes have arranged council rings in the outskirts of the city where they hold monthly outdoor councils. The “Black- snakes” of Bridgeport have done this for years.

Have you tried many of the games in the Manual? These fall days are clear — look up “Spot the Rabbit” and see what you can do with it — see if you can beat out some of the younger members. Then for indoors test your ability to see and remember what you see by trying the game of “Quicksight”.

The Woodcraft Program was demonstrated in forty-two camps, institutions and conferences this summer by representatives from Headquarters. Most of the visits covered several days in each place and included the construction of Woodcraft Council Rings.

F. H. Schmidt and Lina D. Miller were secured to do special work, visiting summer camps, doing work among boys and girls, respectively. From Maine to New Jersey they have left behind them Woodcraft Council Rings and Woodcraft Tribes. Mr. Schmidt visited 17 camps in addition to the promotion of the Camp Directors’ Conference, held in co-operation with the Palisade Interstate Park Commission at the Globe Camp. Miss Miller visited 8 camps and also did special work in introducing the Woodcraft Program in the Industrial Home for Girls at Middletown, Conn., and the New York City School and Hospital at Randall’s Island.

Eleven States and Canada were visited. Included in this is the visit of Mr. Seton with the Culver Woodcraft School and Dillon Wallace also. Mr. Fagan’s work at the Boys’ and County Work Institutes at the Silver Bay Summer School, and with the Y.M. and Y.W.C.A. of Montreal. The type of place varied from private camp to those run by denominations, Working Girls’ Clubs, Settlements, Y.M.H.A., etc.

“Potatriotism” is the new word coined by Dr. Frank Crane, the eminent writer, to fit the slogan sounded by Ernest Thompson Seton — “Put the Hoe Behind the Flag”. Not only Woodcraft League members, but pretty nearly everyone else in the land has heard the appeal to “Be a Potato Patriot”, and several thousands have joined Woodcraft Potato Clubs, while several hundreds of thousands have taken the cue from Mr. Seton’s call to the boys and girls, and not only these, but many adults have enlisted for the war in raising all the potatoes and other vegetables they can, thus “doing their bit” at home. Vacant lots and unused plots of ground all over the land have been put to use through the agency of the Woodcraft Potato Clubs. Other organizations for boys and girls have taken up the idea and are pushing it and if the abundance of potatoes this Fall and Winter keeps the price down and gives us enough to eat at home besides sending a lot to help feed Europe, it should be remembered that the Woodcraft Potato Clubs led in this notable movement.

Perhaps the outstanding illustration of this was in Monmouth County, N. J., where Mrs. Philip Lewisohn organized the entire county and ..text continues 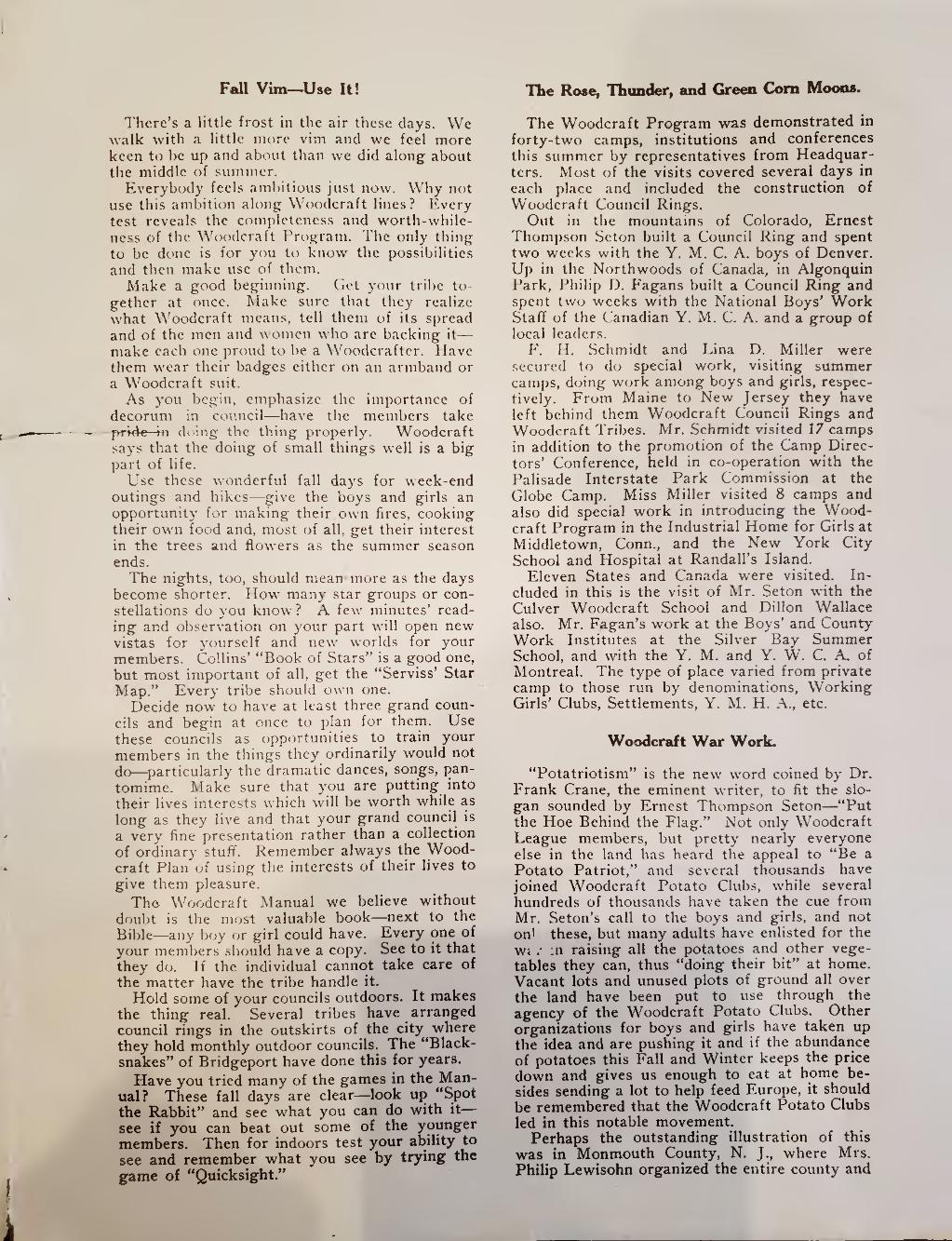