From thewoodcraft.org
Revision as of 08:49, 14 September 2018 by Keny (talk | contribs) (→‎Nebylo zkontrolováno: Založena nová stránka s textem „3oz Boy Scouts All the players but one go out of the room. That one places the coon anywhere in sight, high or low, but in plain view; all come in and s…“)
(diff) ← Older revision | Latest revision (diff) | Newer revision → (diff)
Jump to navigation Jump to search
Tato stránka nebyla zkontrolována

3oz Boy Scouts All the players but one go out of the room. That one places the coon anywhere in sight, high or low, but in plain view; all come in and seek. The first to find it, sits down silenfiy, and scores one. Each sits down, on seeing it, giving no due to the others. The first to score three coons is winner, usually. Sometimes we play till every one but one has a coon; that one is the booby. The others are first, second, etc. Sometimes each is given his number in order of finding it. Then, after seven or eight coons, these numbers are added up, and the lowat h winner. If no coon is available use a thimble. Spear Fights This is an in-door game with out-door weapons. The soft- headed, eight foot spears of the tilting-match are used. The contestants stand on barrels eight feet apart. Each tries to put the other off his barrel. It is well to have a catcher behind each player to save him if he falls. Games are for seven, eleven, or thirteen points. Navajo Feather Dance An eagle feather hung on a horse.hair, so as to stand up- right, is worked by a hidden operator, so as to dance and caper. The dancer has to imitate all its motions. A marion- ettc may be used. It is a great fun-m?ker. Feather Football or Feather Blow This is an in-door, wet-weather game. The players hold a blanket on the knees or on the table. A soft feather is put in the middle. As. many' may play as can get near. They may be in sides, two or four or each for him- self. At the signal, "Go!" each tries to blow the feather off the blanket at the enemy's side, and so count one for himself. A game is usually best out of seven, eleven, or thirteen. Cock-Fighting Get two stout sticks, each two feet long (broomsticks will do). Pad each of these on the end with a ball of rag. These are the spurs. Make an eight-foot ring. The two rivals are on their hunkers, each with a stick through behind his knees, his hands clasped in front of the knees, and ends of the spurs. 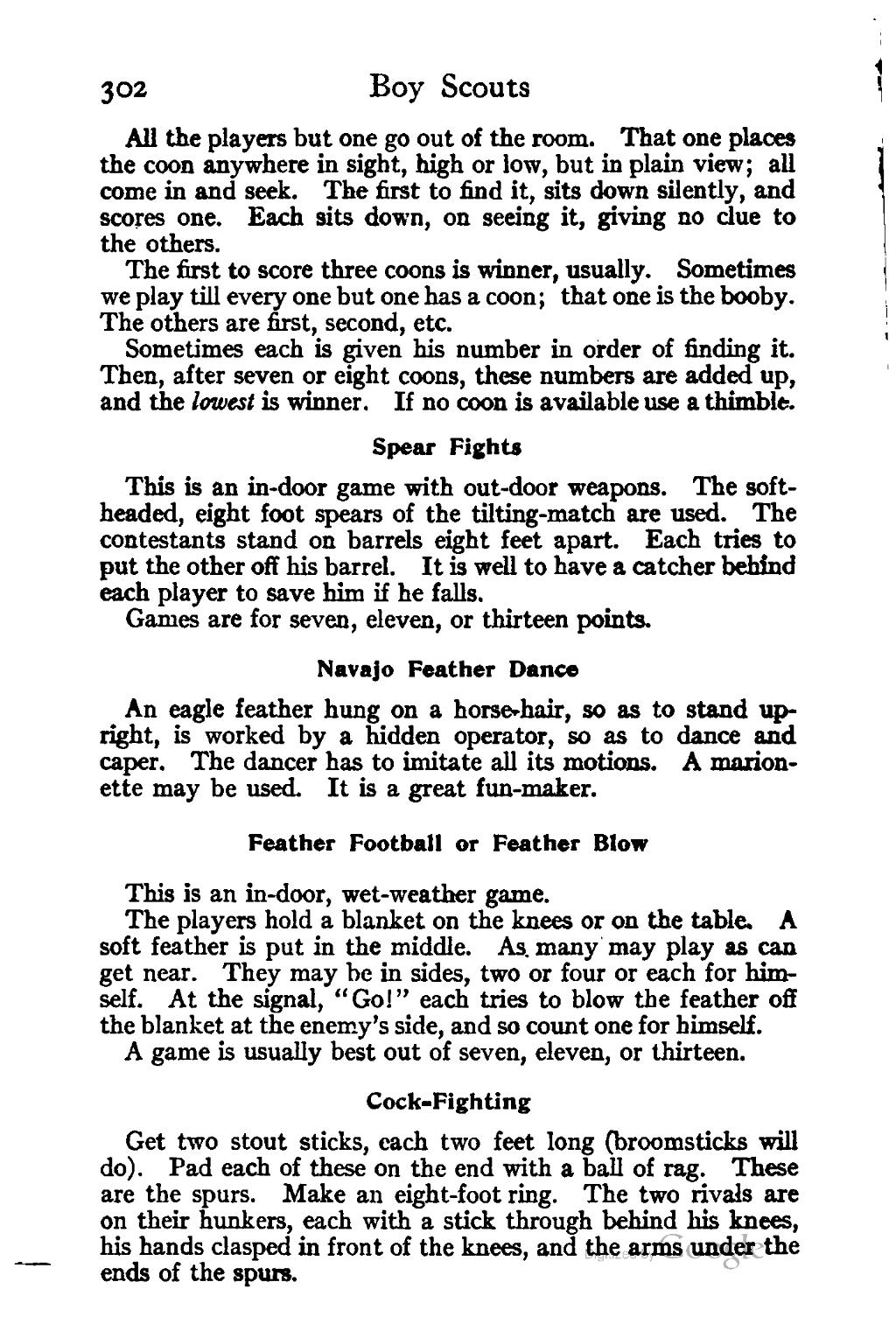