Games and Athletic StandaMs 3ox to get away with it. If he gets across the river or other limit, with warriors in dose pursuit, they give him ten arrow heads (two and one half cents each), or other ransom agreed on. If he gets away safely and hides it, he can come back and dalm fifteen arrow heads from the council as ransom for the scalp. If he is caught, he pays his captor ten arrow heads ransom for his life. The Man-Hunt This is played with a scout and ten or more hostiles, or hounds, according to the country, more when it is rough or wooded. The scout is given a letter addressed to the "Military Com- mandant"* of any given place a mile or two away. He is told to take the letter to any one of three given houses, and get it endorsed, with the hour when he arrived, then return to the starting-point within a certain time. The hostiles are sent to a point half-way, and let go by a starter at the same time as the scout leaves the camp. They are to intercept him. If they catch'him before he delivers the letter he must ran- som his life by paying each two arrow heads (or other forfeit) and his captor keeps the letter as a trophy. If he gets through, but is caught on the road back, he pays half as much for his life. If he gets through, but is over time, it is a draw. If he gets through successfully on time he claims three arrow heads from each hostile and keeps the letter as a trophy. They may not follow him into the house (that is, the fort), but may surround it at one hundred yards distance. They do not know which three houses he is free to enter, but they do know that these are within certain limits. The scout should wear a conspicuous badge (hat, shirt, coat, or feather), and may ride a wheel or go in a wagon, etc., as long as his badge is dearly visible. To "tag" the scout is not to capture. "The blockade to be binding must be effectual." Hunt the Coon This is an in-door game, founded on the familiar "Hunt the Thimble." We use a little dummy coon; either make it or turn a ready- made 'toy rabbit into one by adding tail and black mask, and cropping the ears. ,,. le 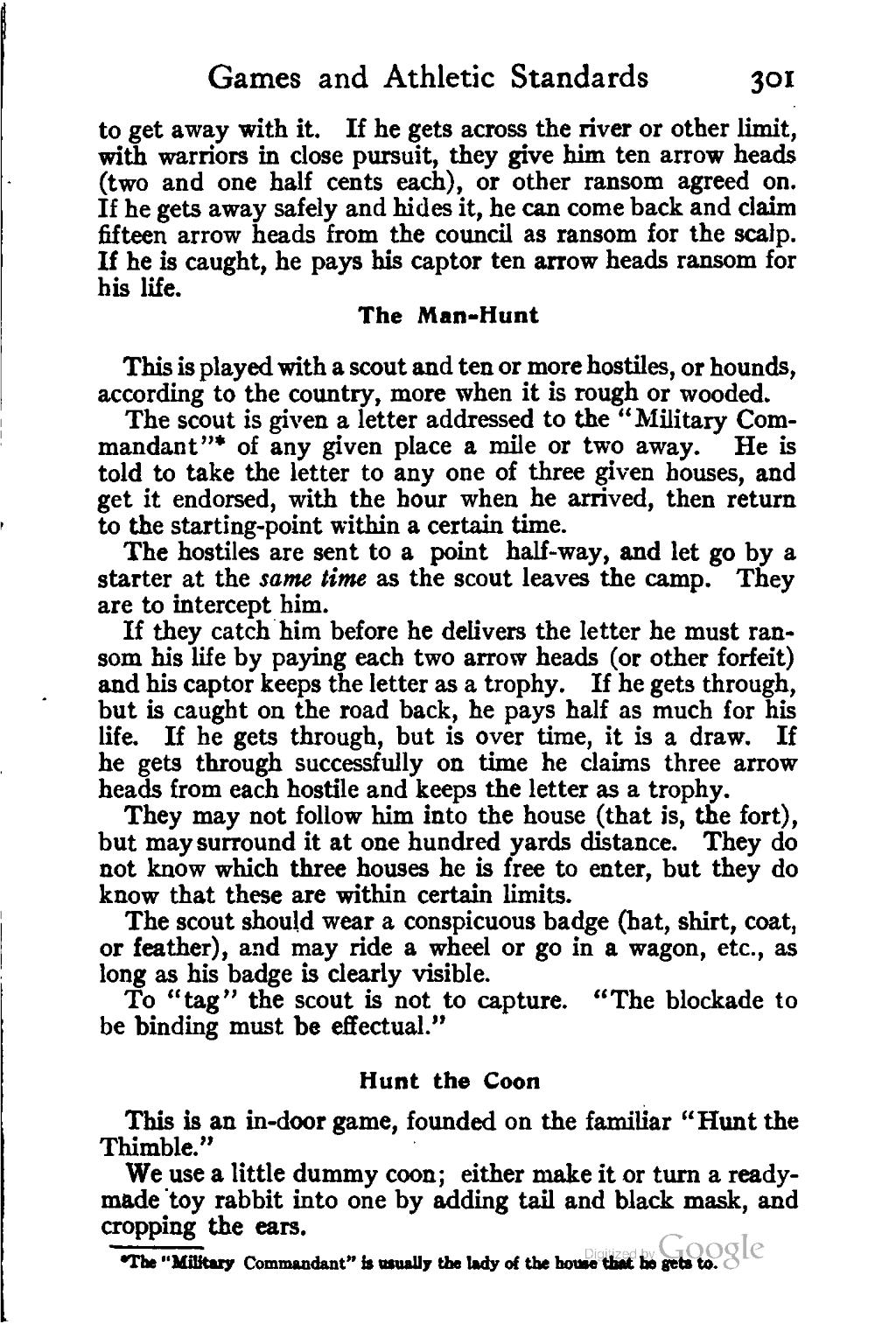