Games and Athletic Standards 303 Now they close; each a/ming to upset the other, to make him lose his spurst or to put him out of the ring, any of which ends that round and scores one for the victor. If both fall, or lose a spur, or go out together, it is a draw. Battle is for seven, eleven, or thirteen rounds. Hand=Wrestling This is a jiujitsu game, introduced by Dr. L. H. Gulick. The two contestants stand right toe to right toe, each right hand clasped, left feet braced, left hand free. At the word, "Go!" each tries to unbalance the other: tha? is, make hlm lift or move one of his feet. A li/t or a shift ends the round. Battles are for best out of five, seven, eleven, or thirteen rounds. Badger=Pulling The two contestants, on hands and knees, face each other. A strong belt or strap is buckled into one great loop that passes round the head of each: that is, crosses his nape. Half-way be- . tween them is a dead line. The one who pulls the other over this line is winner. The contestant can at any time end the bout by lowering his head so the strap slips off; but this counts one against him_ Game is best out of five, seven, eleven, or thirteen points. Poison This is an ancient game. A circle about three feet across is drawn on the ground. The players, holding hands, make a ring around this, and try to make one of the number step into the poison circle. He can evade it by side-stepping, by jump- ing over, or by dragging another fellow into it. First.to make the misstep is "it" for the time or for next game. Hat-Ball When I was among the Chcpewyan Indians of Great Slave Lake, in z9o?, I made myself popular with the young men, as well as boys, by teaching them the old game of hat-ball. The players (about a dozen) put their hats in a row near a house, fence, or log (hollows up). A dead linc is drawn ten feet from the hats; all must stand outside of that. The one who is "it" begins by throwing a soft ball into one of the hats. H he misses the hat, a chip is put into his own, and he tries over. As soon as he drops the ball into a hat, the o?voer runs Digitized by ?,?00? [C 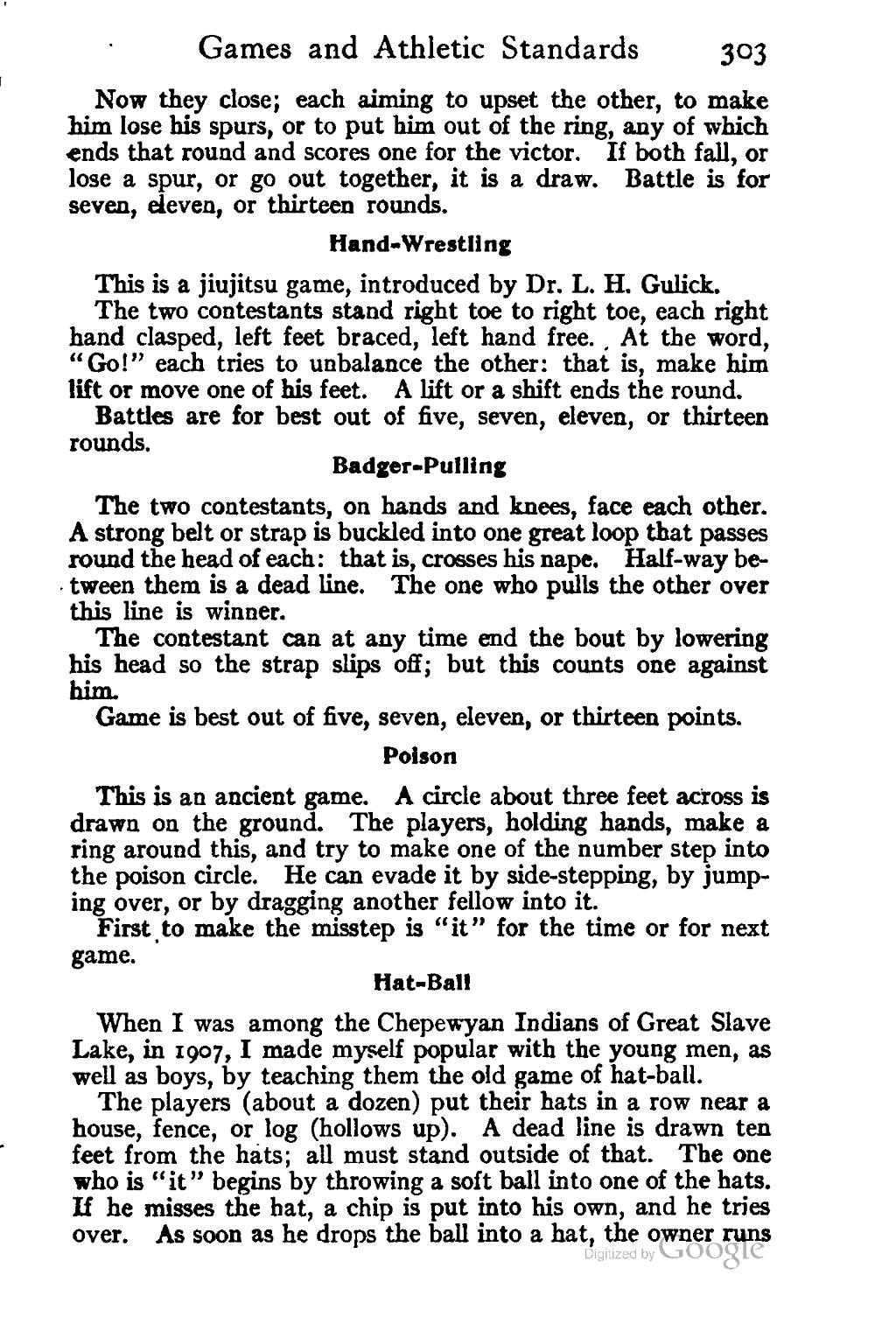