The Spartans of the West 39 men of her tribe, in general. This view, due largely to inac- curate observation and misconception, was correct, perhaps, at times, as to a small percentage of the tribes and peoples whose social organization was of the most elementary kind politically and ceremonially, and especially of such tribes as were non- agricultural." ("Handbook of American Indians," Bur. Am. Ethn., p. 968.) "Among the Iroquoian tribes — the Susquehanna, the Hurons, and the Iroquois — the penalties for killing a woman of the tribe were double those exacted for the killing of a man, because in the death of a woman, the Iroquoian lawgivers recognized the probable loss of a long Une of prospective ofiEspring." ("Handbook American Indian," p. 971.) " In most, if not in all, the highly organized tribes, the woman was the sole master of her own body." ("Handbook North American Indian," p. 972.) "The men are the warriors and hunters, though an old woman of rank usually steers the war-canoe." ("Coast Indian"; Niblack; 1889; p. 253.) "A mother possessed the important authority to forbid her sons going on the war-path, and frequently the chiefs took advantage of this power of the woman, to avoid a rupture with another tribe." ("Handbook North American Indian," p. 971.) "Roger Williams, with reference to another subject, brings this same respect for woman to view; he wrote: 'So did never the Lord Jesus bring any unto his most pure worship, for he abhors, as all men, yea, the very Indians, an unwilling spouse to enter into forced relations. " ("Handbook North America, " p. 972.) "At a later day, and in the face of circumstances adverse to the Indians, Gen. James Clinton, who commanded the New York Division in the Sullivan expedition in 1779, against the hostile Iroquois, paid Ms enemies the tribute of a soldier, by writing in April, 1779, to Colonel Van Schaick, then leading the troops against the Onondaga, the following terse compliment: 'Bad as the savages are, they never violate the chastity of any woman, their prisoners. ' " "Among the Sioux and the Yuchi, men who made a practice of seduction were in grave bodily danger, from the aggrieved women and girls, and the resort by the latter to extreme meas- 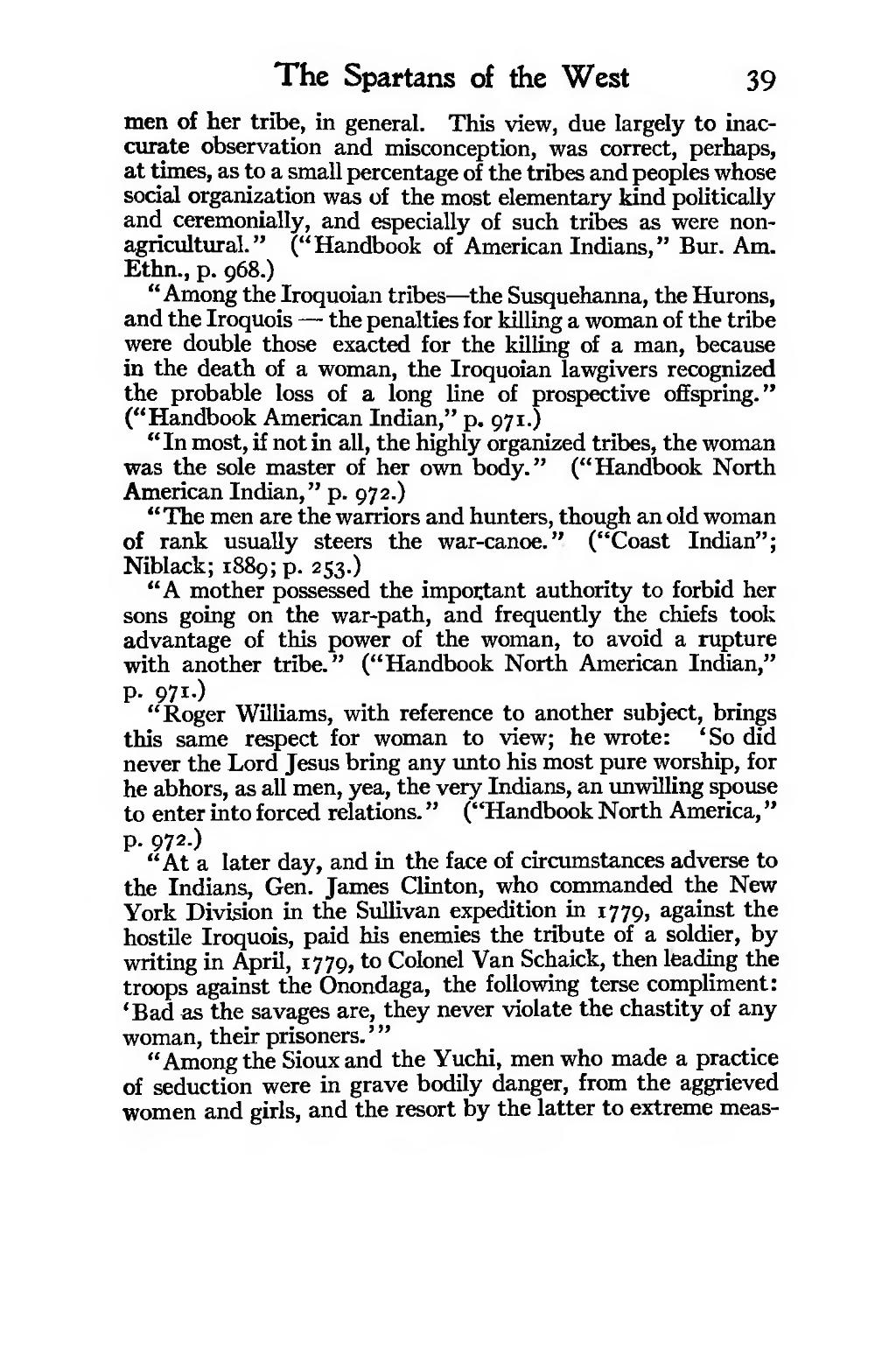