38 The Book of Woodcraft far as the natives of the northern plains were concerned. It is true, that the women gathered fuel for the lodge — bundles of dry willows, or limbs from a fallen Cottonwood. They also did the cooking, and, besides tanning robes, converted the skins of deer, elk, antelope, and mountain sheep, into soft buckskin for family use. But never a one of them suffered from overwork; when they felt like it, they rested; they realized that there were other days coming, and they took their time about anything they had to do. Their husbands, never interfered with them, any more than they did with him in his task of providing the hides and skins and meat, the staff of life. The majority — nearly all of them — were naturally industrious, and took pride in their work; they joyed in putting away parfleche after par- flecheof choice dried meats and pemmican; in tanning soft robes and buckskins for home use or sale, in embroidering wonderful patterns of beads or colored porcupine quills upon moccasin tops, dresses, leggings and sadcUe trappings. When robes were to be traded, they got their share of tiie proceeds. " (Schultz, p. 64.) "It has often been asserted that the 'Indian' did no work, even leaving the cultivation of the corn and squashes to the women. That the women in some of the tribes tended the crops, is true, but in others, like the Pueblos, they seldom or never touched hoe or spade. The Eastern men were himting or build- ing boats, or were on the war-path, hence it was necessary for the women to look after the fields." ("The N. A. of Yesterday," by F. S. Dellenbaugh, p. 333.) Schultz tells us that the men had to make their own clothing. ("My Life as an Indian," p. 180.) Prof. J. O. Dorsey writes of Omaha manners: "Politeness is shown by men to women. Men used to help women and children to alight from horses. When they had to ford streams, the men used to assist them, and sometimes they carried them across on their backs. " (Dorsey, 270-1 ; 3rd Ann Rep. Ethn.) "One of the most erroneous beliefs relating to the status and condition of the American Indian woman is, that she was, both before and after marriage, the abject slave and drudge of the 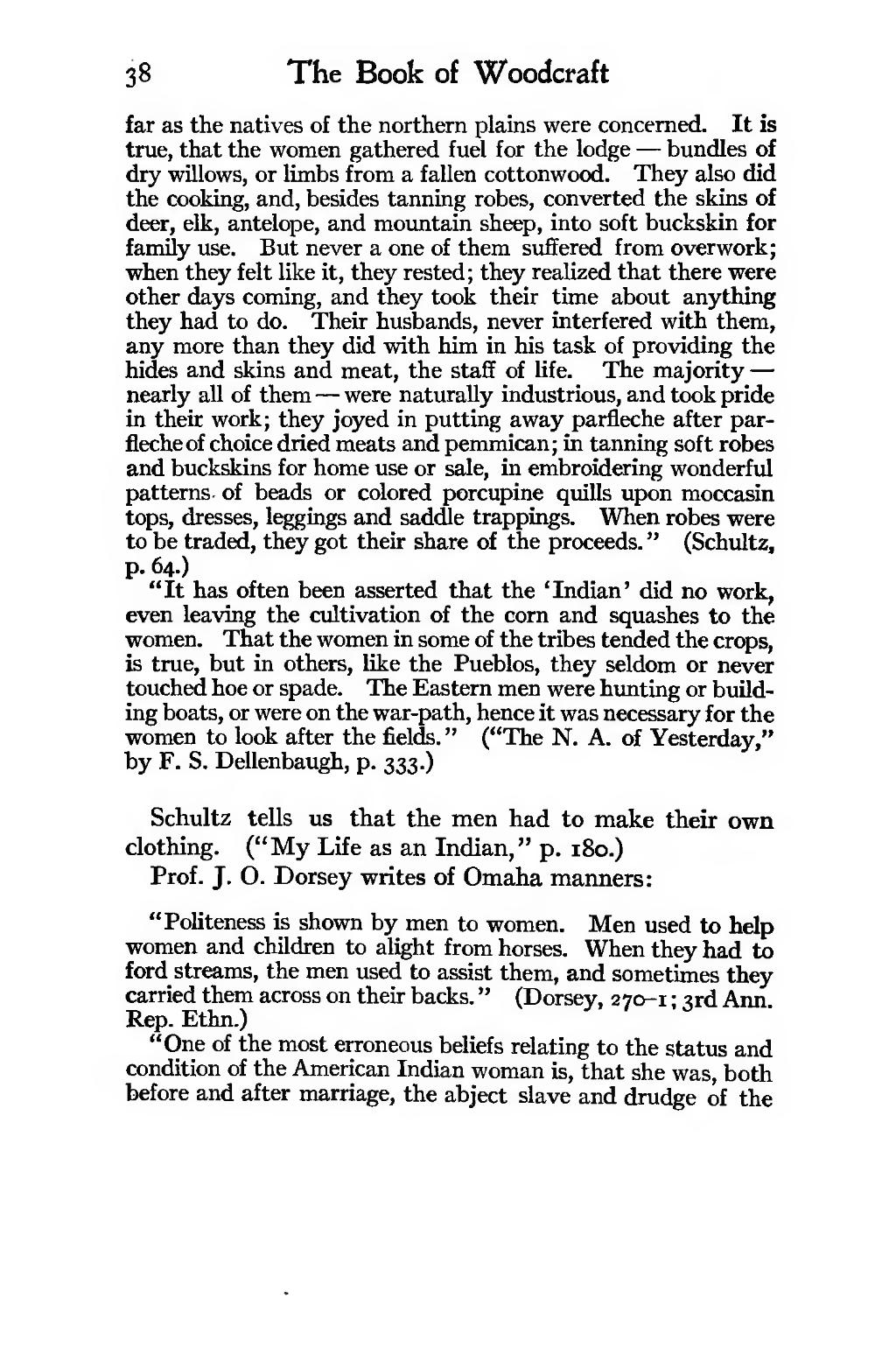