From thewoodcraft.org
Revision as of 22:50, 1 December 2016 by Keny (talk | contribs) (→‎Nebylo zkontrolováno: Založena nová stránka s textem „328 The Book of Woodcraft put to this final resort and recorded afterward that "the holes tasted the best." But the hardest case of all is the best for…“)
(diff) ← Older revision | Latest revision (diff) | Newer revision → (diff)
Jump to navigation Jump to search
Tato stránka nebyla zkontrolována

328 The Book of Woodcraft put to this final resort and recorded afterward that "the holes tasted the best." But the hardest case of all is the best for present dis- cussion. That is the case of the man who has not happened on a rabbit region and who has neither gun nor axe, string nor rawhide. He must look entirely to the vegetable world for sustenance, as do all the northern natives in times of direst famine. Bark and buds. In the forest region are several foods that are available in the depth of winter. First of these is the thin green outer skin or bark, the white innermost bark, and the buds (not the middle brown bark) of quaking asp or white poplar. The brown bark is highly charged with a bitter principle, partly tannin, that makes it unpalatable as well as unwholesome. Aspen bark is a favorite food with elk, deer, beavers, squirrels, rabbits, and mice in winter. I found that by boiling it for some hours it is reduced to a gelatinous and apparently nutritious mass. I have also found the buds of basswood a palatable food supply. In my early days, in the backwood of Canada, we children frequently allayed our hunger with basswood buds and spruce and tamarac shoots. Dr. C. C. Curtis informs me that in British Columbia the natives eat the inner bark of willows, hemlock, and other trees, and I have often heard of the Indians eating the innermost bark of birch. All these are common foods with herbivorous animals. Man, having a less capable stomach, will do well to pre- digest such by roasting or long boiling. Toadstools. There is yet another supply that is commonly shunned, namely — toadstools. No toadstool growing on trees is known to be poisonous, and most contain nutriment — especially the birch polyporus, which grows on birch trees and has pores instead of gills. A toadstool gnawed 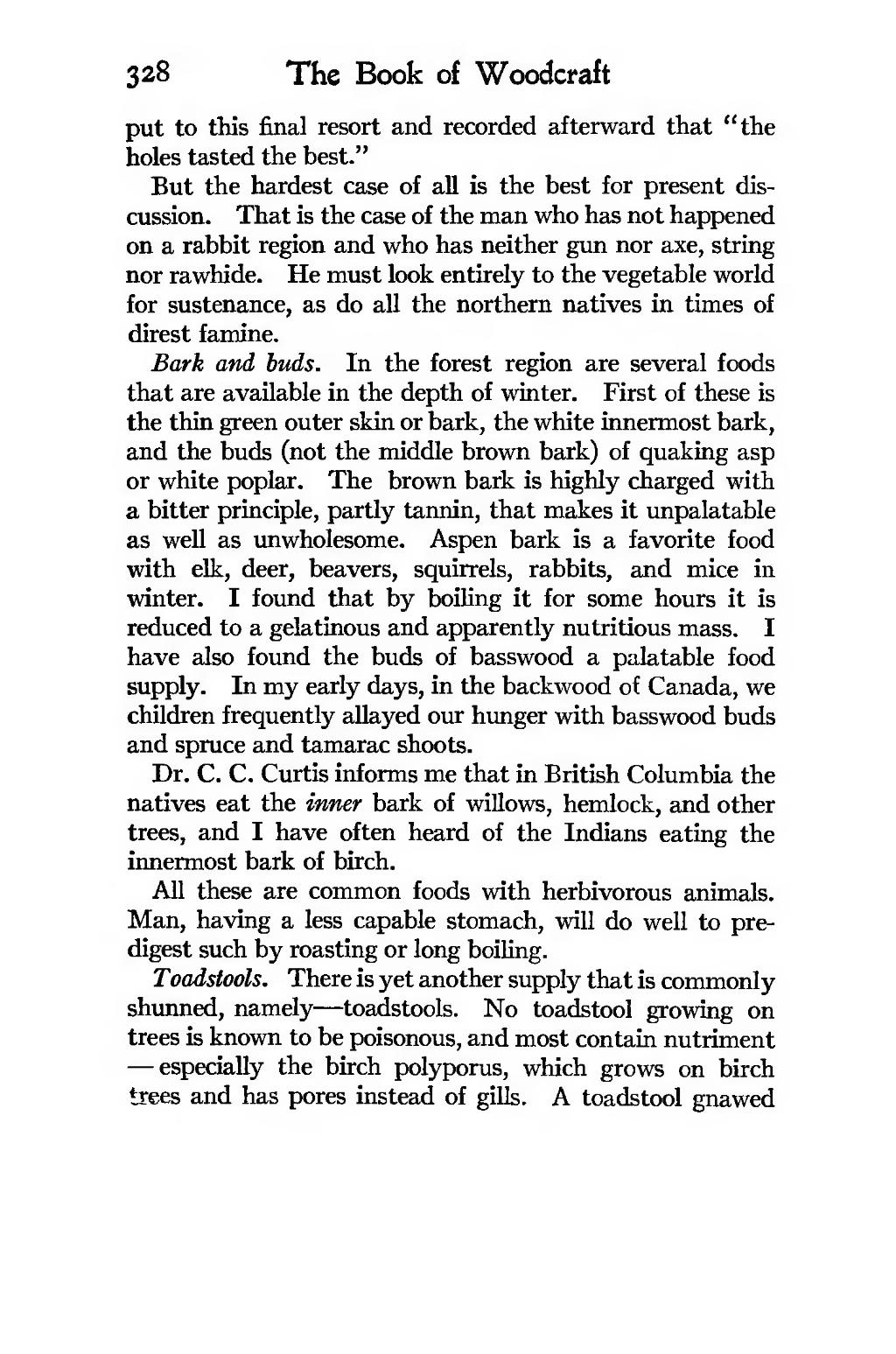