Things to Know and Do an at every yard, sometimes not at all for ﬁfty steps, and telling me with certainty, founded in part on the other things—“This is the trail of a fox.” Which way is he going? is the next question, not easy to answer when the toe-marks do not show; but this is settled by the faint claw-marks already noted. If still in doubt, I can follow till the fox chances on some place under a thick tree or on ice where there is very little snow, and here a distinct im- pression may be found. The Fox’s Hunt For a mile or two I followed my fox. Nothing happened. I got only the thought that his life was largely made up of nose investigation and unfavorable reports from the committee in charge. Then we came to a long, sloping hollow. The fox trotted down this, and near its lower end he. got a nose report of importance for he had swung to the right and gone slowly— 50 said the short steps—zigzagging up the wind. Within ﬁfteen feet, the tacks in the course shortened from four or ﬁve feet to nothing, and ended in a small hole in a bank. From this the fox had pulled out a common, harmless garter snake, torpid, curled up there doubtless to sleep away the winter. The fox chopped the snake across the spine with his powerful meat- cutters, killed it thus, dropped it on the snow, and then, with- out eating a morsel of it as far as I could see, he went on with his hunt. (Illustration 5 A.) Why he should kill a creature that he could not eat I could not understand. I thought that ferocious sort of vice was limited to man and wwsels, but clearly the fox was guilty of the human crime. The dotted guide led me now, with many halts and devious turns, across a great marsh that had doubtless furnished many a fattened mouse in other days, but now the snow and ice for- bade the hunt. On the far end the country was open in places, with clumps of timber, and into this, from the open marsh, had blown a great bank of soft and drifted snow. Manitoban winters are not noted for their smiling geniality or profusion of outdoor ﬂowers. Frost and snow are sure to come early and continue till spring. The thermometer may be for weeks about zero point. It may on occasion dip down to thirty, yes, even forty, degrees below, and whenever with that cold there also comes a gale of wind, it conjures up the awful tempest of the snow that is now of world-wide fame as-the 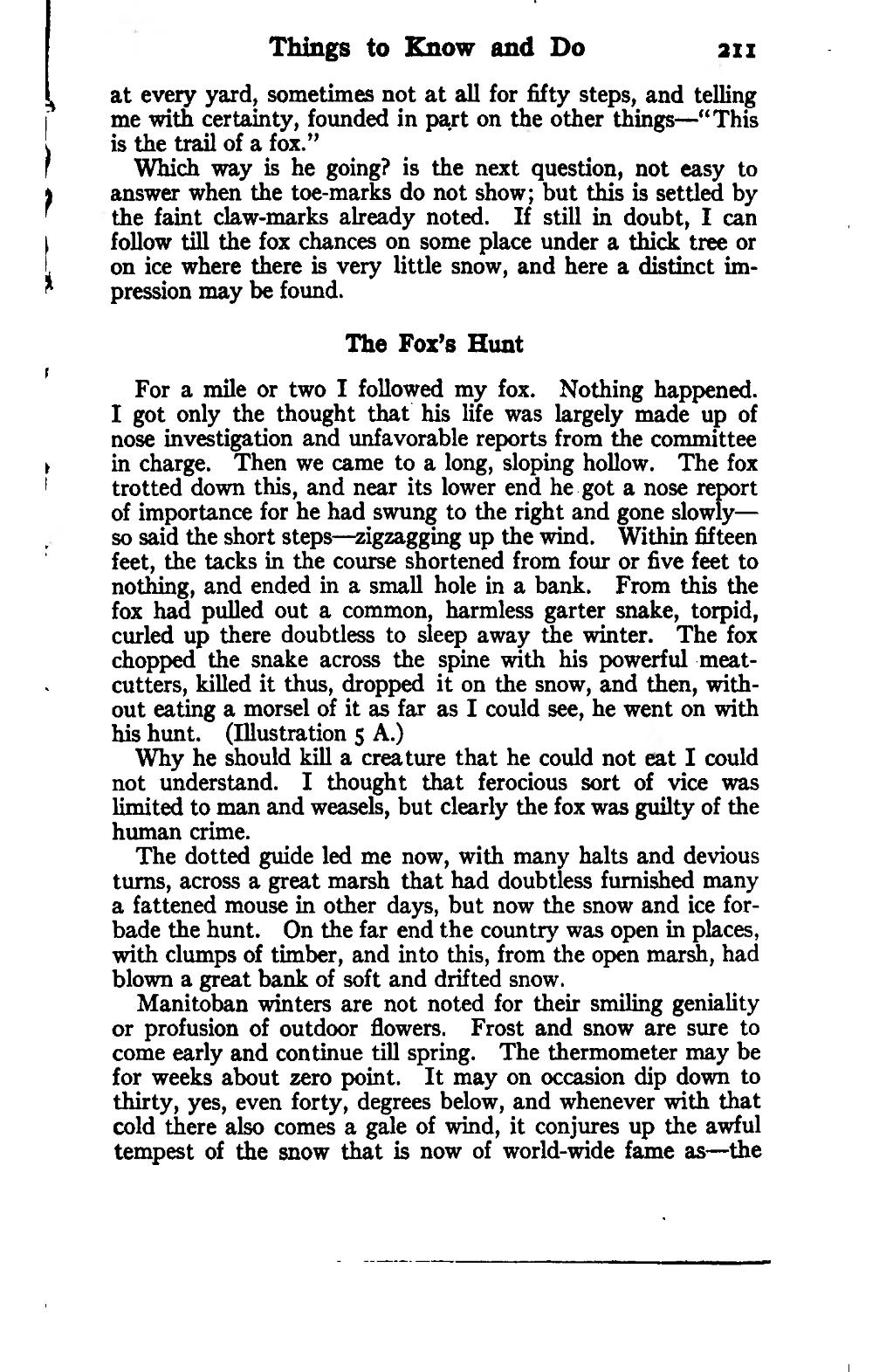