210 Woodcraft Manual for Boys following, following patiently, reading this life of the beast, using notebook at every important march and change. Many an odd new sign has turned up to be put on record and ex. _ plained by later experience. Many a day has passed with nothing tangible in the way of reward; then, as in all hunting, there has come a streak of luck, a shower of facts and abundant reward for the barren weeks one by, an insight into animal ways and mind that could not ave been obtained in any other way. For here it is written down by the animal itself in the oldest of all writing—a chapter of the creature’s normal life. One day, soon after the snow had come, I set out on one of the long decipherments. The day before I had followed a fox-trail or threeor four miles, to learn only that he tacked up wind and smelled at every log, bump, and tree that stuck through the snow; that he had followed a white hare at full speed, but was easily left behind when the bare got into his ancient safety—the scrubby, brushy woods. This morning I took up another fox-trail. The frost was intense, the snow was dry and powdery and as each foot was raised it fell back; so that the track was merely shapele dim- ples in the whiteness. No tell-tale details of toes and claws were there, but still I knew it for a fox-trail. It was too small for a coyote. There were but two others that might have been confounded with it; one a very large house-cat, the other a very small house-dog. The fox has the supple paw of the cat. It spreads even more, but it shows the long, intractile claws. As a stepper the fox ranks close to the cat. His trail is noted also for its narrowness—that is, the feet are set nearly in one straight line. This in a trail usually means a swift animal; while the badly spread marks, seen at a maximum in the badger, stand for great but sluggish strength. The region put the (at out of the reckoning. Besides, at one or two places the paw had grazed the snow, showing two long furrows, the marks of claws that do not sheathe: dog- marks, perhaps, but never a cat’s. The marks were aligned like a cat’s, but were fourteen inches apart, while it is rare for a cat to step more than ten. They were not dog-marks: ﬁrst, the probabilities were against it; second, the marks were nearly in a line, showing a chest too narrow for a do . Then the toes did not dra , though there was four inches ogsnow. The register could not distinguished but there was one feature that settled all doubt—the big, soft, shallow marks of the fox’s brush, sometimes sweeping the snow .JW‘; _-"‘ ‘3. .‘ ' . ‘1‘1. 7‘ .-|. . Tar—cu- _ 3 1-4-4 1. A A A a -4. I’ 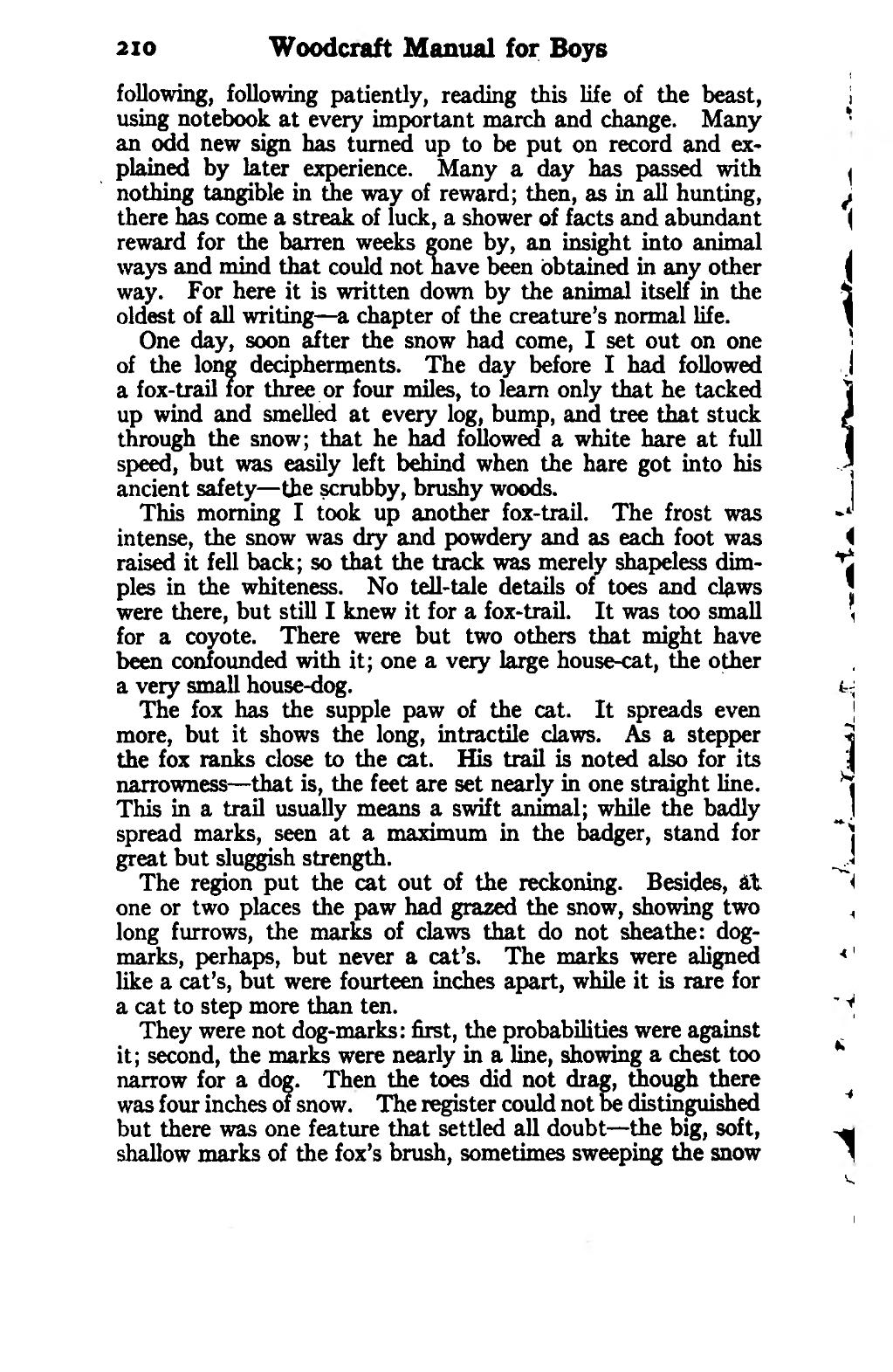