Things to Know and Do , 407 would say. And he has a glaring defect—the result no doubt of domestication, of long generations on pavements and in houses—he drags his toes. All these things contribute to make - the dog a noisy walker in the woods. Wolf It is well at this time to compare the track of the dog with that of the wolf. I have made dozens of drawings, casts, prints, photographs, and studies of wolf and dog tracks; and have not found a single reliable feature that will distinguish them. One hunter says the wolf has the relatively small outer toes. Yes, sometimes; but not when compared with a collie. Another says that the wolf’s foot is longer; but not when compared with that of a greyhound, staghound, or lurcher. Another, the wolf’s foot is larger; yet it will not rank 1n size with that of a St. Bernard or a Great Dane. The wolf lifts his feet neatly without dragging his toes; but so do many dogs, especially country dogs. Thus all these diagnostics fail. on the whole a wolf is a better walker than a dog. His tracks do usually register, but not always, and m some wolves rarely. If a wolf-tr ack in the snow be followed for a mile or two, it will be found to go cautiously up to an unusual or promising object. It is obviously the trail of a suspicious, shy creature while the dog-trail is direct, and usually unafraid. But this does not apply to the dogs which poach or kill sheep. _ There is there- ’fore no sure means of distinguishing them, even in the wilder— ness. One can only judge by probabilities. I have often heard inexperienced hunters boast that they could “tell them every time”; but old hunters usually say, “No man can tell for sure.” Rabbits and Hares America is well provided with rabbits and hares. A score or more of species are now recognized, and two very well-known types are the cottontail of the woods and the jack-rabbit of the p ms. The cottontail is much like an English rabbit, but it is a. little smaller, has shorter ears, and the whole under part of the tail is gloriﬁed into a ﬂuﬁy, snowy powder-puﬂ. It leads the life of a hare, not making burrows, but entering burrows at times under the stress of danger. The track of a New England cottontail' ls given in Illustration 1. 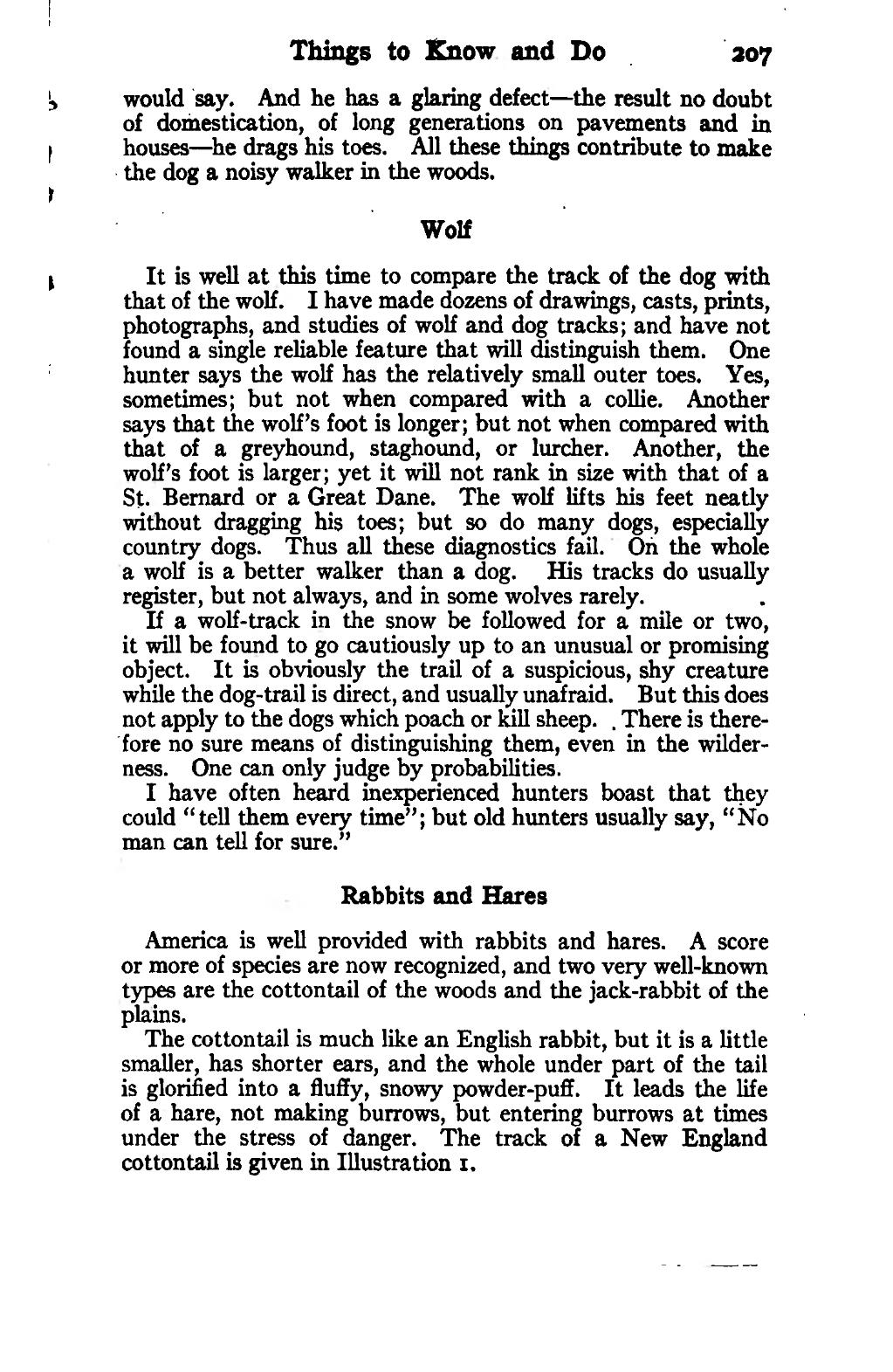