206 Woodcraft Manual for Boys of eat and dog. MoSt anatomists select the cat as the ideal of muscular and bony structure. It is the perfect animal, and its track also is a good one to use for standard. In these separate prints the roundness of the toe-pads tells the softness, their spread from each other shows the supplenoss of the toes; the absence of claw-marks tells of the retractability of these weapons. The front and hind feet are equal' in length, but the front feet are broader. This is the rule among true quadrupeds. The series of tracks—that is, its trail—shows the manner of the cat in walking. In this the animal used appar- ently but two legs, because the hind foot falls exactly on the trail made by the front foot, each track being really doubled. This is perfect tracking. There are several advantages in it. Every teamster knows that a wagon whose hind wheels do not exactly follow the front wheels is a very bad wagon to haul in sand, snow, or mud. The trail for it has to be broken twice, and the labor increased, some say, 50 per cent. This same principle holds good in the case of the cat track; by cor- rect following the animal moves more easily. But there is still a more important reason. A hunting cat sneaking through the woods after prey must keep its eyes on the woods ahead or on the prey itself. At the very most it may pick out a smooth, safe, silent place for its front feet to tread on. Especially at the climax of the hunt all its senses are focussed on the intended 'victim; it cannot select a safe spot for each hind foot in turn, even though the faintest crunch of a dry leaf will surely spoil the stalk. But there is no danger of that; the cat can see the spots selected for the front feet, and the hind feet are so per- fectly trained that they seek unerringly the very same spots—'— the safe places that the front feet have just left. Thus perfect stepping is silent stepping, and is essential to all creatures that stalk their prey. The opposite kind 'of stepping is seen in very heavy animals which frequent marshy ground; to them it would be a positive disadvantage to set the hind foot in the tread of the front foot, where so much of the support has just been destroyed. The ox illustrates this. These principles are ap- plicable in geology, where the trails are the only biographical records of certain species From the manner of setting the feet we can distinguish the predacious and the marsh-frequenting quadrupeds. The next track likely to be seen is that of the dog. In this the harder, less pliant foot and the non-retractile ‘claws are clearly seen. But the trail shows the dog is not a correct walker. His tracks are “out of register” as a printer -44. ‘_.“'-A_f‘ -‘V‘ A‘t‘L _l'_ ’F__ h- _ 1.. L. 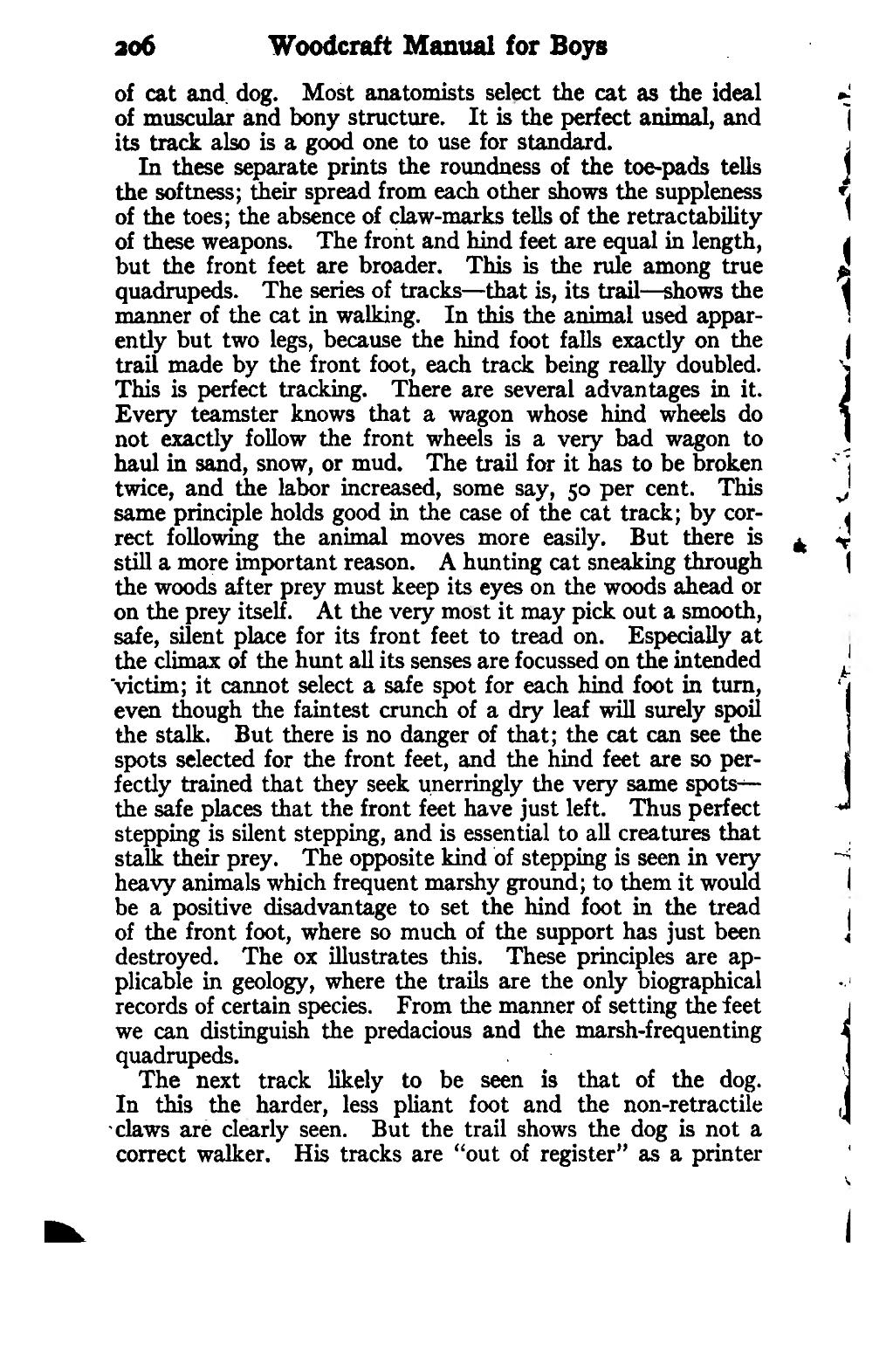