208 Woodcraft Manual for Boys. .As .the cottontail bounds, the hind feet track ahead of the front feet, and the faster he goes the faster ahead his hind feet get. This is true of all quadrupeds that bound, but 15 more obvious in the rabbits, because the fore and hind feet diﬁer so much 1n size. . The jack-rabbit of Kansas is the best known of the long- eared jacks. His trail, compared with that of the cottontail, would be as in Illustrations 2 and 3. The greater size of the marks and the double length of the bounds are the obvious but not important differences, because a young jack would come down to the cottontail standard. The two reliable diﬂerences I found are: First, the jack’s feet are rarely paired when he 13 bounding at full speed, while the cottontail pairs his hind feet but not his front ones. (Animals which climb usually pair their front feet in running, just as tree-birds hop when on the ground.) Second, the stroke that is shown (x in Illustration 2) is diagnostic of the southern jack-rabbit; it is the mark made by the long hanging tail. Each of the four types of hare common in the temperate parts of America has its own style of tail and fashion of wearing 1t: The northern or white-tailed jack carries his snowy-white tail out straight behind, so its general pure~white 1s visible; . The southern or black- tailed jack has his tail jet-black on the upper part, and he carries it straight down; . The varying hare has an inconsequent, upturned tuft, like a tear in his brown pantaloons, showing the white undergarment; The cottontail has his latter end brown above, but he keeps it curled up tight on his back, so as to show nothing but the gleaming white puﬁ of cotton on a helpful background of rich brown. The cottontail’s tail never touches the ground except when he sits down on it. The most variable features of any animal are always its most specialized features. The jack-rabbit’ s tail-piece 1s much subject to variation, and the length and depth of the little intertrack—ial dash that it makes 1n the snow is a better guide to the individual that made it than would be the tracks of all four feet together. Fox 0f more general interest perhaps is the track of the fox. I have spent many days—yes, and nights—on the trail, .'t-i’.('__..‘k- ‘8‘. -17; I mad. 1 L ‘. .__/n_ k-J’AJ'. - ‘- ’0 A. 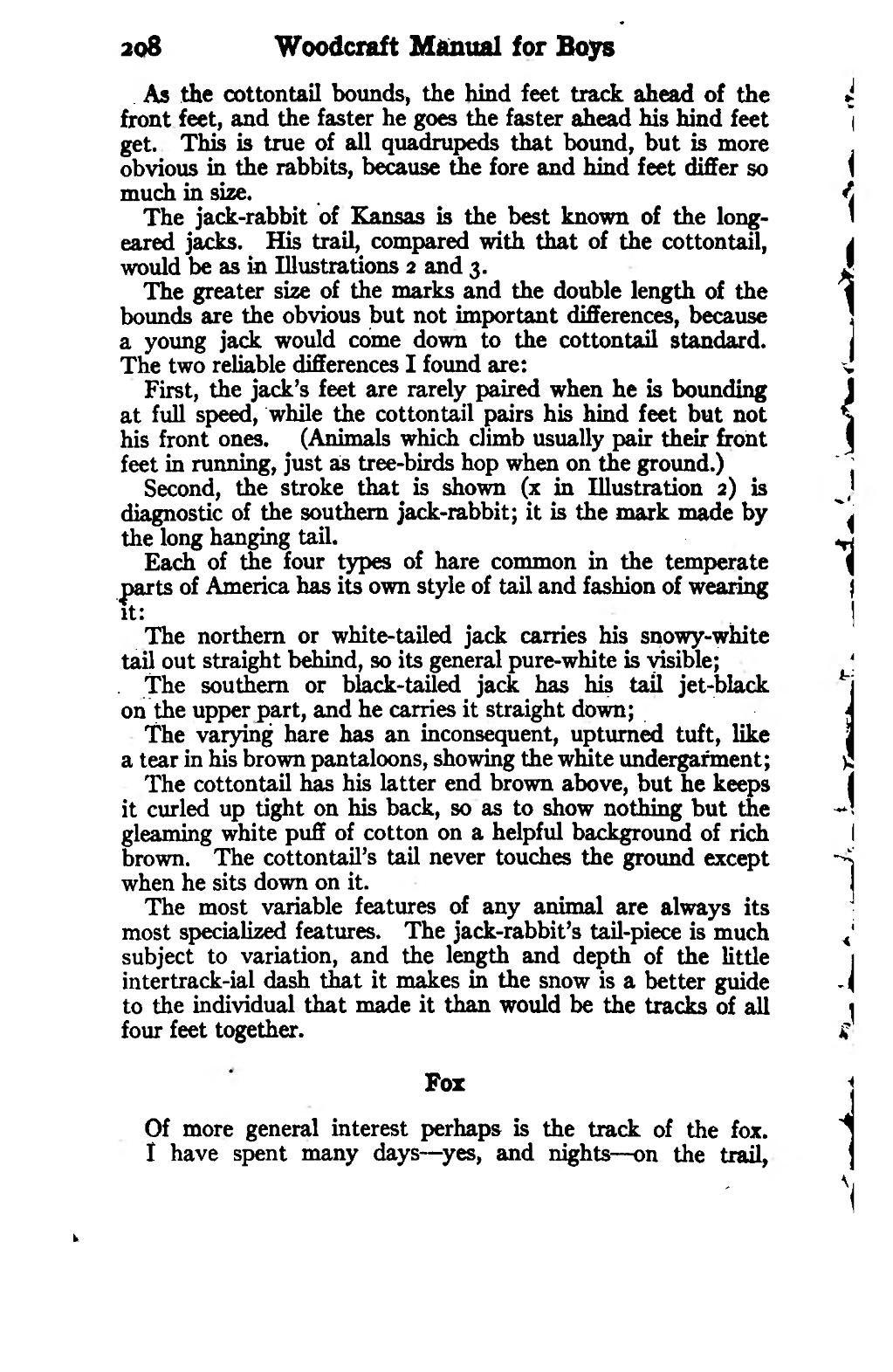