V'w ﬁ“ “0’ .7 ‘--‘w' a v—r Thingsto Know and Do 205 eastable. As a matter of fact, none of the ﬁnestwere in the mud; and the much more interesting dust-tracks were never within reach of this method. For most practical purposes I have been forced to make my records by drawing the tracks. No Two Tracks Alike The trailer’s ﬁrst task is to learn the trails he means to follow. The Red Indian and the Bushman, of course, simply memorize them from their earliest days, but we ﬁnd it helpful and much easier to record them in some way. Apart from other considerations, a form is always better comprehended if we reproduce it on paper. As a general principle, no two kinds of animals leave the same track. As a matter of fact, no two in- dividuals leave the same trail. Just as surely as there are diﬁerences in size and disposition, so there will be correspond- ing diﬁerences in its trail; but this is reﬁning beyond the purposes of practicability in most cases, and for the present we may be satisﬁed to consider it a general rule that each species leaves its own clearly recognizable track. One of my daily pastimes when the snow is on the ground—which is the easiest and ideal time for the trailer, and especially for the beginner—is to take up some trail early in the morning and follow it over hill and dale, carefully noting any change and every action as written in the snow, and it is a wonderftu rewarding way of learning the methods and life of an animal. The trail records with perfect truthfulness everything that he did or tried to do at a time when he was unembarrassed by the nearness of his worst enemy. The trail is an autobiographic chapter of the creature’s life, written unwittingly, indeed, and in perfect sin- cen . Wtiienever in America during the winter I have found myself with time to pass between trains, I endeavor to get out into the country, and rarely fail to ﬁnd and read one of these more or less rewarding chapters, and thus get an insight into the life of the animal, as well as into the kinds that are about; for most quadrupeds are nocturnal, and their presence is generally un- suspected by those who do not know how to read the secrets of the trail. . Dog and Cat The ﬁrst trails to catch the eye and the best for ﬁrst study are those nearest home. Two well-marked types are the tracks 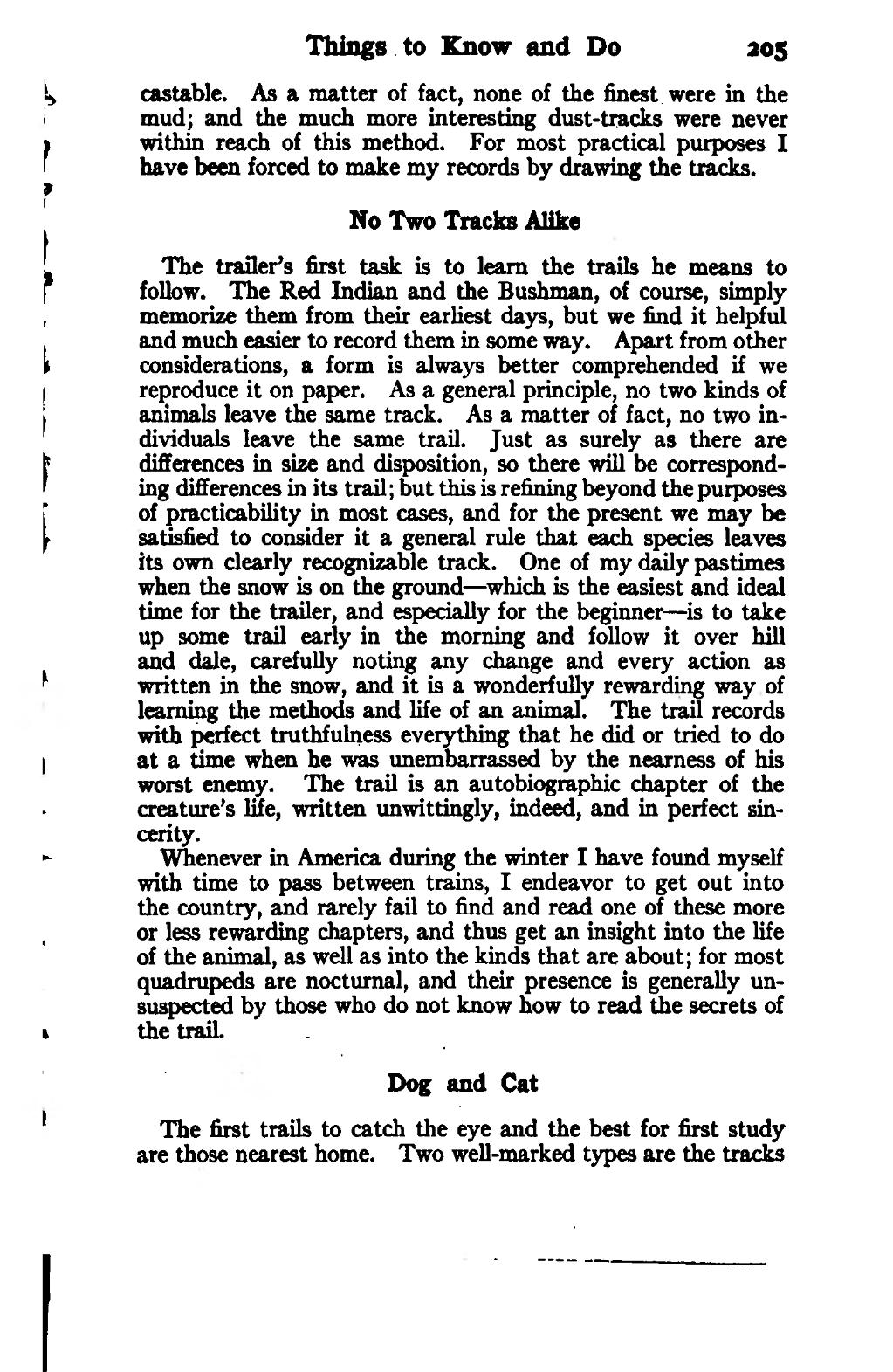