204 Woodcraft Manual for Boys .Yet nowhere do we ﬁnd in Cooper’s novels any attempt to take us out and show us this woodcraft. He is content to stand with us afar OE and point it out as something to be worshipped —to point it out and let it die. Fenimore Cooper has had many imitators, just as Uncas has had many successors. The ﬁne art of trailing is still main- tained in the Far West, and it has always seemed strange to me that none has endeavored to give it permanent record, other than superlative adjectives of outside praise. Trailing What is trailing? The fox-hunter has some idea when he sees a suﬂerb pack follow a faint scent through a hundred perplexing p cee, discerning just which way the fox went, and about how long ago. The detective does another kind of trail; ing when he follows some triﬂing clue through the world of thought, tracing the secret of an unknown man along an in- visible path, running it to earth at last in the very brain that conceived it. In his trailing the Indian uses the senses of the “animal” to aid the brain of the man. To a great extent his eyes do the work of the hound’s nose, but the nose is not idle. When the trail disappears, he must do the human detective work; but under all circumstances his brains must be backed by the ﬁnest senses, superb physique, and ripe experience, or he cannot hope to overmatch his prey. Hard to Photograph Tracks When, in 1882, I began my dictionary of tracks (see “Life Histories of Northern Animals”), I found that there was no literature on the subject. All facts had to be gathered di- rectly from Nature. My ﬁrst attempts at recording tracks were made with pencil and paper. Next, realizing how com- pletely the pencil sketch is limited by one’s own knowledge, I tried photography; but it invariably happens that not one track in ten thousand is ﬁt for photographing, and itcannot be taken except when the sun is about thirty degrees above the horizon—that is, high enough to make a picture, and low enough to cast a shadow of every detail. Thus photography was possible only for about an hour in the early morning and an hour in the late afternoon. But the opportunity in the meanwhile usually was gone. I then- tried making a plaster cast of the tracks in the mud. Only one such in a million was . ‘12. ‘Wxﬁdhm __“- _-:’._ m- as ._j_ L‘Aw-J 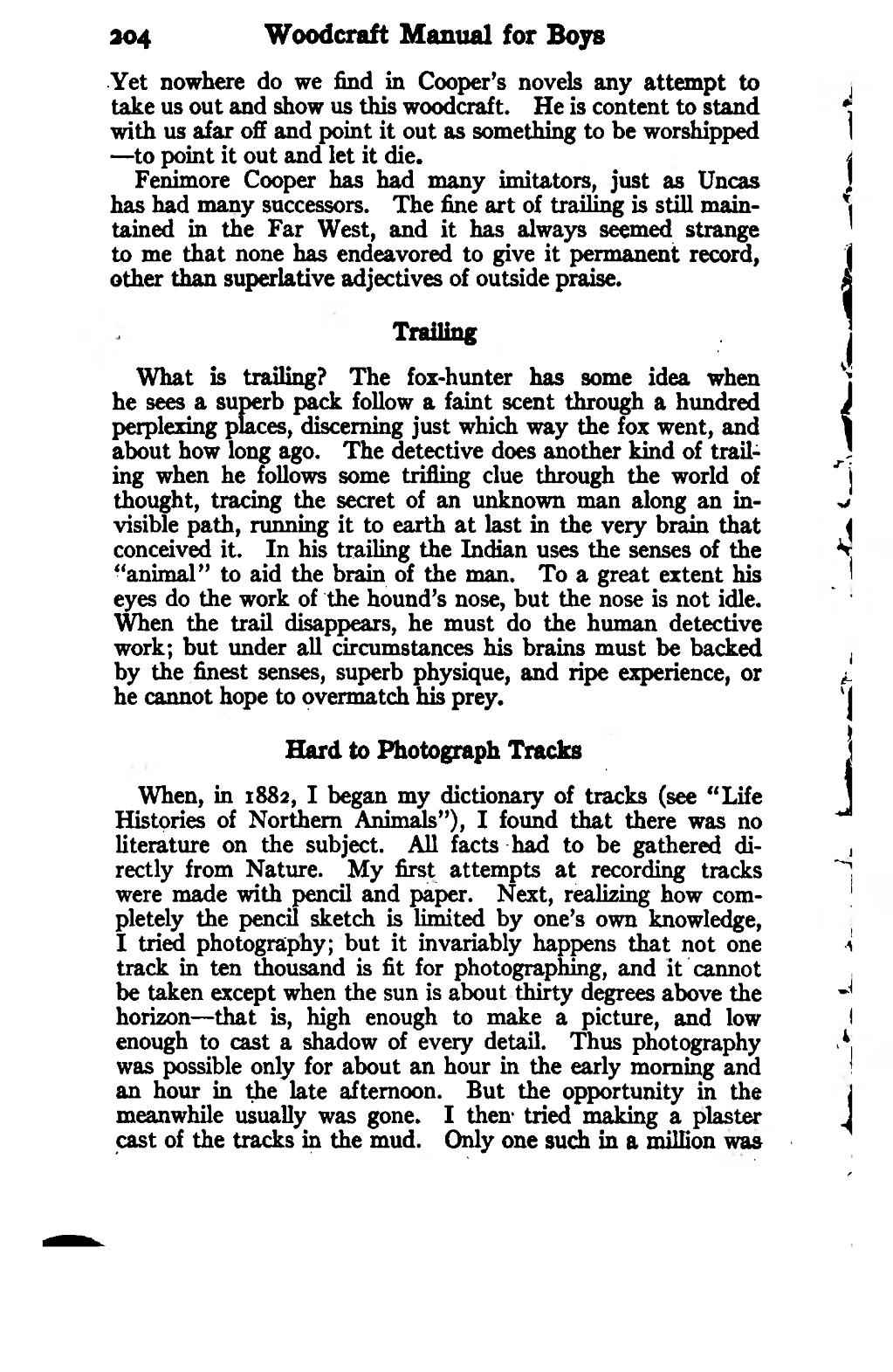