r30 ‘ Woodcraft Manual for Boys changes it into an interrupted current and this sets up high pres- sure alternating currents in the secondary of the coil; or if it is an alternating current to begin with, then the transformer sets up high pressure alternating currents in the secondary coil. In either case these high pressure alternating currents charge the condenser and this in turn discharges through the spark- gap- and makes a continuous stream of bright, crackling sparks. Now the discharge of a condenser through the spark-gap sets up high tension currents of very high frequency, or electric oscillations as they are called, and these currents surge through the tuning coil, the aérial, and ground wires at the rate of a mil- lion times a second, more or less. These electric oscillations running forth and back along the aerial wire are changed into electric waves, just as an ordinary electric current ﬂowing in a wire is changed into magnetic lines of force, and these electric waves push out into space in every direction exactly as the vibrations of a bell send forth sound waves, but with this diﬂerence, where a sound wave will travel only a few miles at most, an electric wave will travel hundreds of miles, and, again, where a sound wave travels 1,086 feet a. second, an electric wave travels 186,500 miles a second, which is the speed of light. . RECEIVING. Since electric waves from a sending aérial are radiated into space in every direction, they will, of course, strike any aérial wire wherever it may be located if it is not too far away. And when the electric waves strike an aérial connected with a receiver they set up in the aérial wire electric oscillations Shaving exactly the same number of vibrations per second as the electric oscillations which sent out the waves. For this reason the receiving circuits must be tuned to the sending circuits. . The high frequency oscillations set up in the aerial wires by the incoming electric waves will ﬂow down the aerial to the tuning coil, thence through the condenser and the detector, on to the ground and back again and it is the purpose of the de— tector to act as a sort of valve to change the rapid oscillations into an interrupted direct current. This latter kind of a current energizes the telephone receiver where the former kind of current will not aﬁect it, with the result that buzzing sounds are made which are read by. the operator, that is a short buzz is read as a dot and a long buzz as a dash, and in this way messages in the International Code are received. .4- 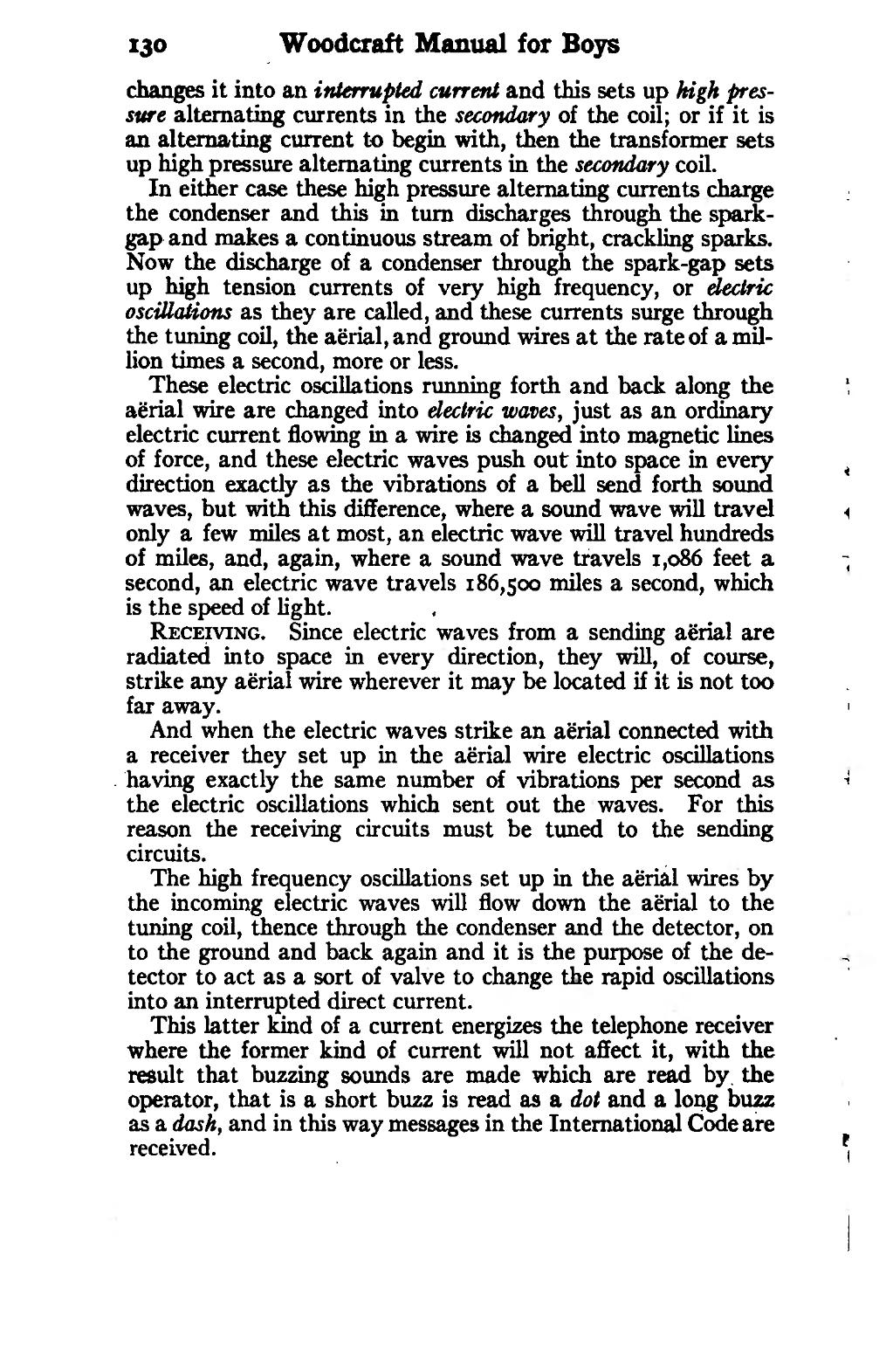