_ Things to Know and Do I 131 As I mentioned in the beginning of this article wireless ap- paratus can be bought ready to set up of nearly all dealers in electrical supplies or if you want to make the apparatus for yourself get The Book of Wireless” published by D. Appleton and Co., New York, which tells you all about it. Totems in Town A totem is an emblem of a man, a group of men, or an idea. It has no reference to words or letters. Before men knew how to write they needed marks to indicate ownership. This mark must be simple and legible and was chosen because of something connected with the owner or his family. Later some of the trades adopted a symbol; for in- stance the barbers in the early days were “blood letters” and were closely associated with the medical profession. Their totem indicated their business, and we have the red-and-white barber pole of to-day. It was among the Indians along the west coast of America that the science and art of totems reached its highest development, though they have a. world-wide usage and go back in history to the earliest times. . Out of this use of totems as owner marks and signs grew the whole science of heraldry and national ﬂags. Thanks to the fusion of many small armies into one or two big armies, that is, of many tribes into a nation, and also to modern weapons which made it possible to kill a man farther oﬂ than you could see the totem on his shield, national ﬂags have replaced the armorial devices, and are the principal totems used to-day. But a new possibility has been discovered in modern times. Totems will serve the ends of commerce, and a great revival of their use is now seen. The totem is visible such a long way OE and is understood by all, whether or not they can read or know our language, is copyrightable and advertisable, so that most of the great railway companies, etc., now have totems. There are not less than one hundred common totems used in our streets to—day. Among the familiar ones seen are the Amer- ican eagle, with white head and tail, the Austrian eagle with two heads, the British lion, the Irish harp, the French ﬂeur de lis, etc. Among trades the three balls of the pawnbroker, the golden ﬂeece of the drygoods man, the mortar and pestle of the druggist, and others are well known. Examples of these and others are given in the illustration,but any wideawake Woodcraft Boy will be able to ﬁnd many others by careful observation. 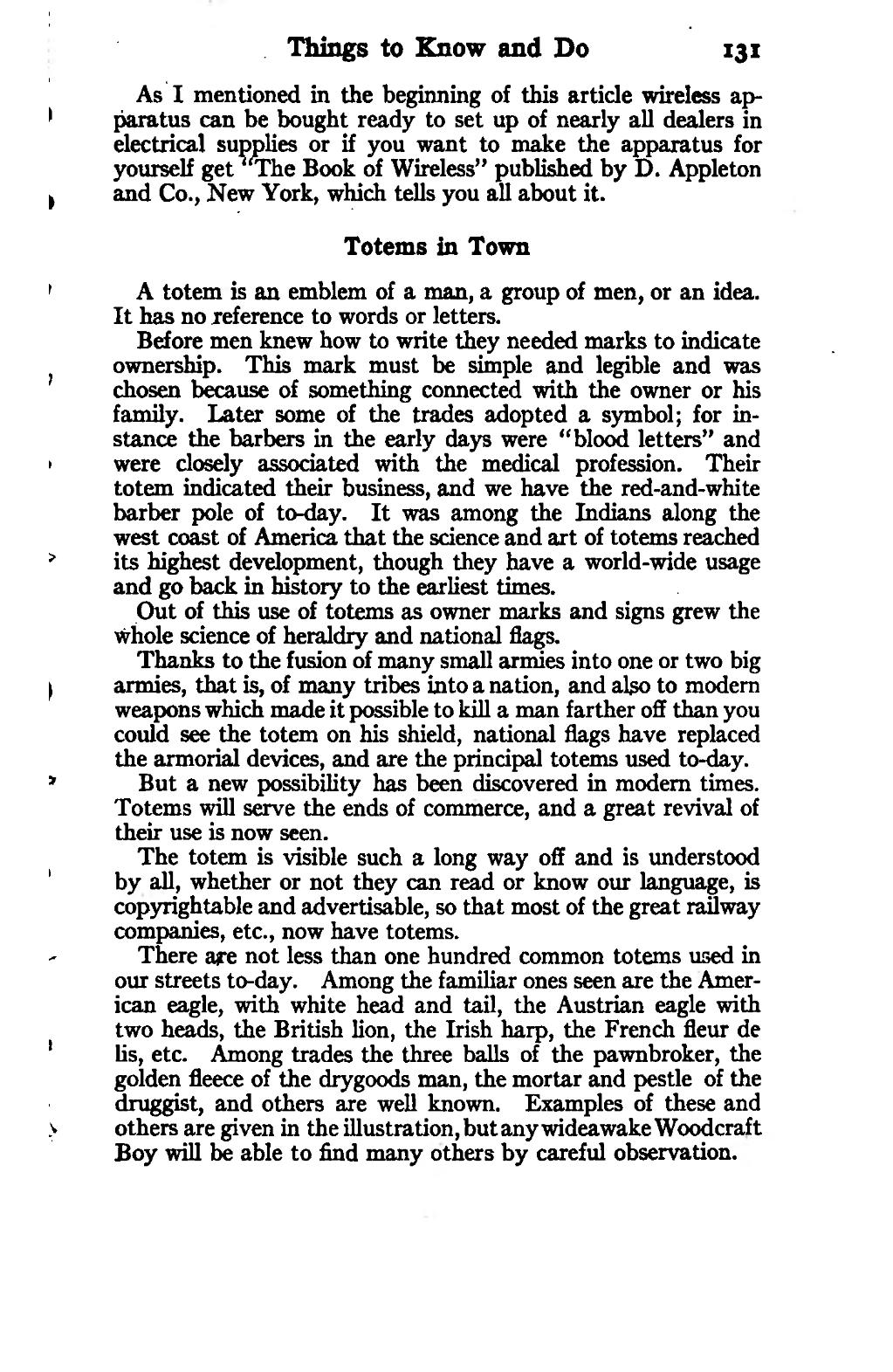