Tribe Activities 103 not much sleeping that night. A leopard's shrill cry woke them from their first doze; the baying of wolves awakened them from the next; and when a great owl gave his weird wail just above their heads, they gave it up. The crackling of twigs told them that they were being himted by some night prowler. In the dark and with no weapons — for they had dropped everything but their knives — they were at the mercy of any wild beast which discovered their hiding place. Then Om remembered the fire which had saved his life when a child, the fire which no animal was bold enough to come near. Could he make a fire. The moss upon which they lay was dry. A rough flake of flint which had not been shaped was in his skin pouch and his flint knife was in his belt. He had seen his father call the Red Spirit from the moss by strik- ing flints together. Once or twice he had succeeded in doing it himself, but it was no easy task. StUl there was nothing for it but to try. With trembling hands he gathered the driest of the moss into a Uttle pile and pulled together some dry twigs. Sut got on his knees ready to blow the smallest spark into flame. Om took the flint flake in his left band and struck it a glancing blow with his knife. A dull spark flew, but did not Ught the moss. Again and again he tried, but in vain. Meanwhile, soft but ominously heavy footfalls came nearer and nearer. It was now or never. In desperation he struck a terrific blow which shattered the knife and brought the blood to his battered hand. He saw nothing, but Sut suddenly stooped lower and blew gently, and then more strongly. A tiny glow appeared, a wisp of smoke and then a red flame. Om crouched by the fire, exhausted, speechless, and helpless; but Sut skilfully fed the growing flames till they leaped high, and the hunter in the dark leaped away with great bounds into the deep woods. All night the boys sat by the fire, hungry and exhausted, but happy and safe. In the morning they looked down on the open spot below them which had been the scene of the terrible fight of the night before; and there, still locked together by horn and claw and jaw, were the bear and the bull, both dead and both victorious. A fox came out of the brush and sniffed at the pool of blood in which they lay; a flock of red-eyed buzzards hovered in the air above and finally aUghted on a dead tree near by. The boys were looking with mingled awe and delight at the bodies of their savage foes of the day before, when a brilliant thought came to Sut. "Om! The homs and claws! We will take them to the camp, and who will laugh at us then? " No 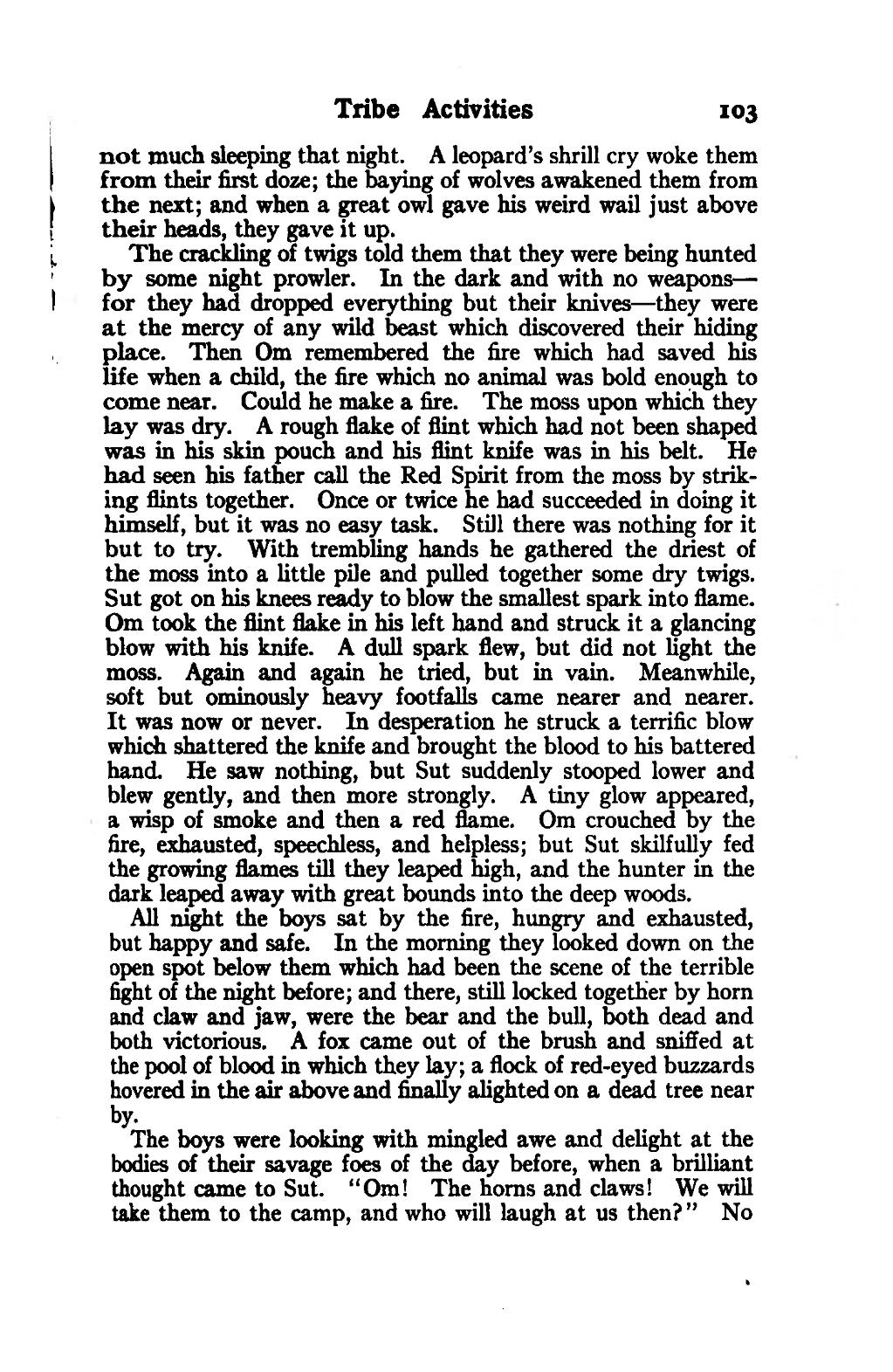