104 Woodcraft Manual for Boys sooner thought than done. Down the cliff they dambered, forgetful of everything but the coveted trophies. At the foot they found their weapons where they had dropped them. The fox skulked away, the buzzards screamed and flapped to a little more distant tree, while the boys hacked off with rude knife and stone bludgeon one of the bear's claws and the horns of the bull. Then they fled up the cliff again and started hot foot for home. As they approached the stream by which they lived, Sut began to hasten, but Om went slower and slower. "Hurry, you snail," said Sut, "the women and girls will be poimding the meal and making ready for the men to eat and they will see by these that we are not boys to be laughed at." "But," said Om, "we did not kill them; we ran away." "Oh! but we don't need to tell aU that," said Sut; "hurry up, hurry up!" But Om would not hurry. He went more and more slowly and finally sat down to think it out. The temptation was a very strong one. Perhaps all they would need to do would be to be silent, and it would be very pleasant to be treated like mighty hunters and men. But the trouble was that deep down in their hearts they would know that they had not proved it. Then a thought came to Om which settled his imcertainty. If it had not been for Odin who sent the bear to fight the bull, and sent the Red One at the prayer of the flints to drive away the leopard, they would not be here and there would be no story to tell. Then he remembered that his father had said that the Great One loved truth as he loved light. He turned to Sut with all his indecision gone. "We will tell the truth! We will not win the man-right by telling a lie." Sut grumbled a little, but yielded, as he always did to the stronger will of Om. When the boys came to the river bank there was a great shout, and all went out to meet them, for the villagers had grown anxious at their long absence. And they were pleased that no one laughed at them, not even the girls. As the bo)rs were being fed, they told the story of their adventures amid the eager questionings of the home group. The horns of the bull and the paws of the bear were passed about, and the older m«a told how large the bear must have been from the size of the paw. They then told stories of bears which they had seen and fights of many kinds in the forest till Om and Sut were forgotten. But Om was pleased to notice that his father looked at him with quiet approval in his eyes, and he heard him say to Oma: "Our son will be a great hunter, for his feet are swift andhis hands are strong, and his head is chief over them all,, jand^i n^are 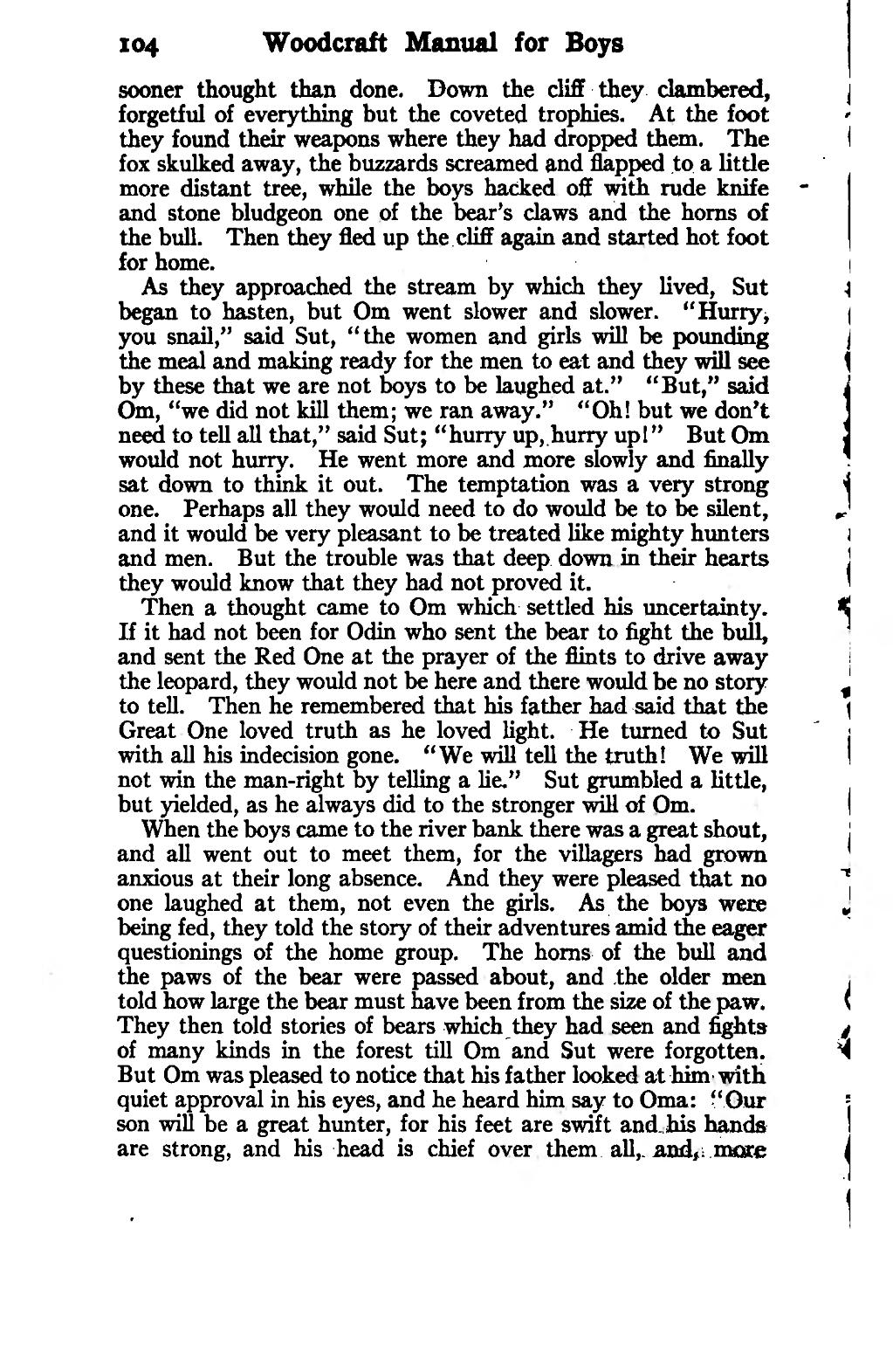