I02 Woodcraft Manual for Boys their cave homes; and they imagined how envious the men and boys who had been afraid would be and how humble the girls. But one day they ventured a little too near, and a stray buUock caught sight of the boys and immediately charged. Each boy climbed a tree with a swiftness which did credit to his bringing up, and there they stayed hour after hour during the long day, the bull watching them from blood-red eyes. Now and then he would stroll away to browse and drink, but at the slightest movement would dash back to the foot of the trees where the boys roosted. As night came on the boys grew colder and colder and hungrier and hungrier. They remembered the men who had gone into the buffalo valley and never came back, and they wished they were at home, even though the girls did laugh at them and they had to sit back of the men at the fire. Finally they escaped, but by good fortune, not by any prowess of their own. A great bear came out of the wooid, looking for something to fill his empty stomach. He had missed a deer as it came to drink. He was tired of the roots and ants' nests. He wanted meat — good red meat and plenty of it. When he saw the bullock, he hesitated for a moment, for big as he was he usually passed bulls by; a fight with one was such uncertain business, and even if he killed the bull the appetite was likely to be killed, too. But the bear was very big and the bull not very large, and he was out of sorts and he hesitated too long. The bull spied him and charged instantly. The bear stood up on his hind feet. As the bull struck him, Bruin gave him a blow with his great paw which would have broken the neck of any other animal, and buried his great fangs in his shoulder. But the bull's sharp horns pierced the chest of the bear and bore him back to the ground. Deeper and deeper the cruel horns reached, while 'the claws of the bear tore great strips from the bull's flanks. It was a terrible spectacle, but the boys were too near to enjoy it. Quick as a flash they sUd down and ran up the cliffs above them like two monkeys. At the top they stopped, panting for breath, and looked down into the valley. The air was filled with terrible roarings and bellowings. In the dim light they could see a huge brown mass rolling back and forth below them. Now they thought the bear had won and now the bull. By and by the dark settled down, and nothing could be seen, the sounds grew fainter, and finally all was still. The boys did not dare to go through the woods in the dark, so they found a bed of leaves and lay down where they were. But there was 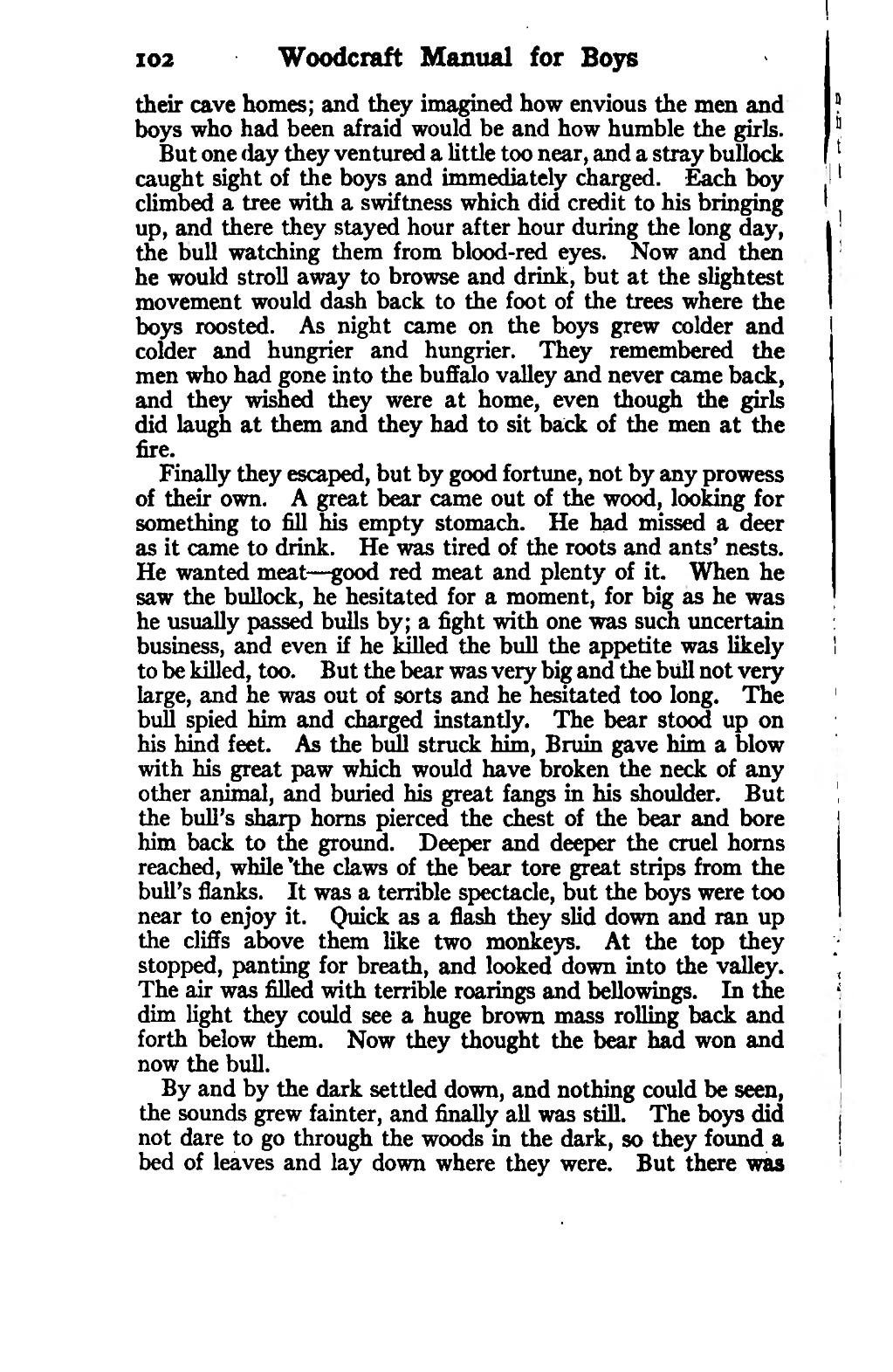