Tribe Activities loi all that they had arrived at man's estate, and that was to prove themselves hunters strong enough and cunnmg enough to match their wits and weapons against the strength and fury of the bear and the wild buffalo. They spent long days in the woods together planning and contriving- They provided themselves with bows of the strong- est and arrows of the sharpest, with saw-edged knives, lances, and stone axes. For hours they shot at a mark, taking turns and criticising each other's shooting and handling of the bow. Sometimes the men found them and smiled at them indulgently. But the women and girls laughed and jibed at the boys and pretended to be very much alarmed at the idea of two smooth- faced boys going hunting alone in the woods. That made the boys work all the harder and keep more and more by themselves. Now in a valley, some distance away, there was a herd of wild buffaloes, the most dreaded of all the wild beasts. The bear was ugly only when hungry or wounded. The leopards rarely atta^ed men in the daylight and in the open. Even the wolves did not like to fight men unless they could take them at a disadvantage. But tibe buffalo bulls seemed to have in their breasts the concentrated fury of all the savage creatures of the wild. They feared nothing. Their thick hide and powerful muscles defended their vital parts from the arrows and spears of men. They would charge at sight, and when their keen eyes did not detect their enemies their sensitive nostrils did. The only possibility of escape was to climb the nearest tree, and sometimes the mad bull would lie in wait at the foot of the tree till the man dropped from cold or exhaustion. Many men had been already killed. Even the boldest and the hardiest rarely ventured near the buffalo valley. The boys were warned from it as from sure death. For that reason, perhaps, it had a peculiar fa^ination for Om and Sut They talked about it and dreamed about it. They climbed hills from which they could look down into it. They never forgot the tune when Uiey first saw the herd in the dis- tance, the bulls feeding on the outside, the cows and calves on the inside. Now and then some young bull would get too bold and rouse the anger of one of the kings of the heid and there would be a terrible battle. When the dust hid the fighters from the boys' sight, they could hear the terrible bellowings. As time went on, buffalo valley had a greater and greater attraction for the boys. They ventured nearer and nearer. They lay on the bluffs overlooking the valley and boasted to each other how they would kill a bullock and carry it back to 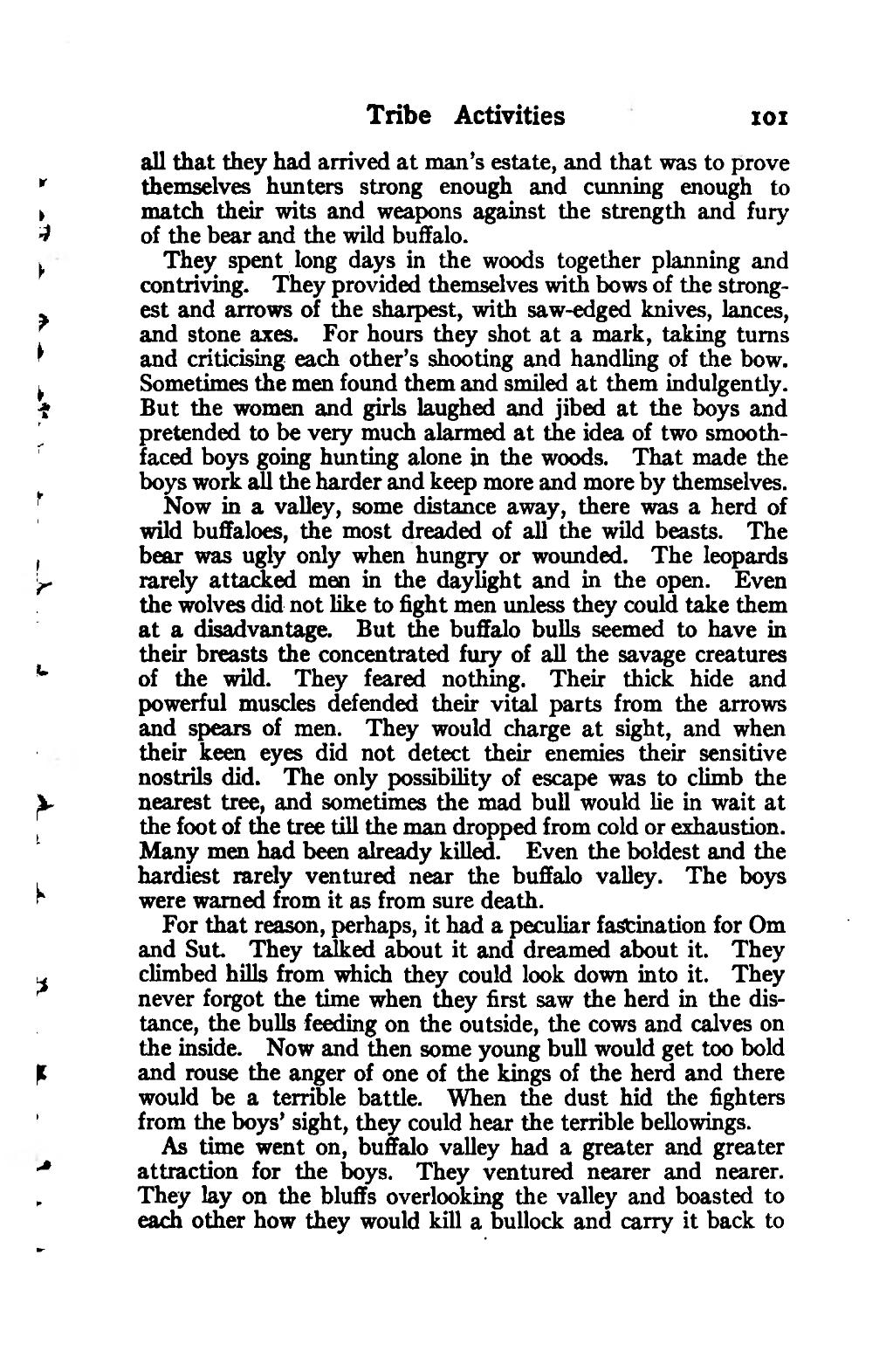