86 Woodcraft Manual for Boys tuft of white muslin strips on the end. The tail finished looks like (g), and is stuck inside the wearer's belt, which goes through the two cord loops (A), shows a way of fastening on the tail with cord only. The four caribou are best in white. Three or four hunters are needed. They should have bows but no arrows. The Medicine Man should have a drum and be able to sing the Muje Mukesin, as given, or other Indian dance tune. One or two per- sons who can howl like wolves should be sent off to one side, and another that can yell like a lynx or a panther on the other side, well away from the ring. Otherwise the Medicine Man or leader can do the imitations. Now we are ready for THE DANCE OF THE WHITE CARIBOU The Medicine Man begins by giving three thumps on his drum to call attention; then says in a loud, singing voice: "The Caribou have not come on our himting grounds for three snows. We need meat. Thus only can we bring them back, by the big medicine of the Caribou Dance, by the power of the White Caribou." He rolls his drum, then in turn faces each of the Winds, beckoning, remonstrating, and calling them by name: Kitchi- nodin (West); Keeway-din (North); Wabaninodin (East); Shawani-nodin (South). Calling last to the quarter whence the caribou are to come, finishing the call with a long Ko — Kee — Na. Then as he thumps a slow single beat the white caribou come in at a stately pace timed to the drum. Their heads are high, and they hold the horns on their heads, with one hand, as they proudly march around. After going round once in a sun cirde (same way as the sun), they go each to a comer. The drum stops; all four approach to salute the great mystery in the middle, the fire. They bow to it together, heads low, tails high, uttering a long bellow. Then they circle once, close to the fire; stop on opposite sides of it, facing outward; march each to a comer or compass point; and then bow or honor that windf bellowing long. Now the Medicine Man begins any good dance song and beats double time. The caribou dance around once in a circle. The music stops. The first and second, and third and fourth, close in combat. They lower their heads, lock homs held safely away from the head, lash tails, snort, kick up the dust, and dance around each other two or three times. The music begins again, and they circle once. 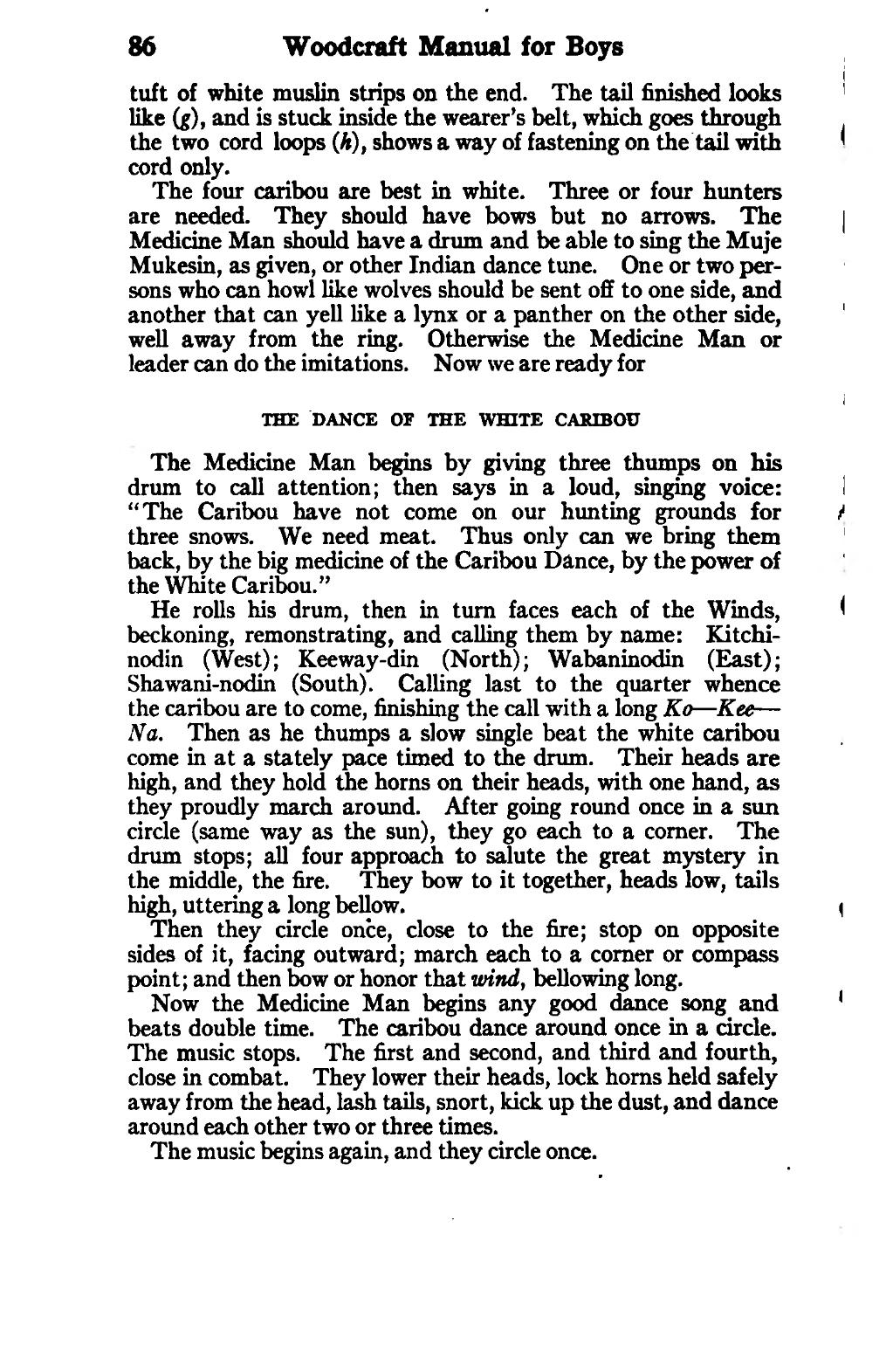