The music stops. Now the first and fourth and second and third lock horns and fight.

After a round or so the music begins again and they circle, dancing as before.

Now the howling of wolves is heard in the distance, from the fellows already posted.

The caribou rush toward that side and face it in a row, threatening, with horns low, as they snort, stamp, and kick up the dust.

The wolf-howling ceases. The caribou are victorious. They turn away and circle once to the music, holding their heads high.

The wolf-howling, panther-yelling (or other menacing sound) is now heard in the other direction.

Again the caribou line up and defy it. When it ceases, they dance proudly around, heads up, chests out as they step, for they have conquered every foe.

But a band of hunters appears, crawling flat on their breasts and carrying bows. They crawl half around the ring, each telling those behind by signs, “Here they are; we have found them,” “Four big fellows,” “Come on,” etc. When they come opposite the caribou, the first hunter lets off a short “yelp.” The caribou spring to the opposite side of the ring, and then line up to defy this new noise; but do not understand it, so gaze in fear. The hunters draw their bows together, and make as though each let fly an arrow, then slap their hands to make a loud “crack.” The first caribou drops, the others turn in fear and run around about half of the ring, heads low, and not dancing; then they dash for the timber. The hunters run forward with yells. The leader holds up the horns. All dance and yell around the fallen caribou and then drag it off the scene.

The Medicine Man says: “Behold, it never fails; the Caribou dance brings the Caribou. It is great medicine. Now there is meat in the lodge.”

The Animal Dance of Nana-bo-jou

For this we need a Nana-bo-jou; that is, a grown-up who can drum and sing. He has a drum and drumstick, and a straw or paper club; also two goblins, these are good-sized boys or girls wearing ugly masks, or at least black hoods with two eye holes, made as hideous as possible; and any number of children, from three or four up, for animals. If each has the attributes of some bird or beast, so much the better. ..text continues 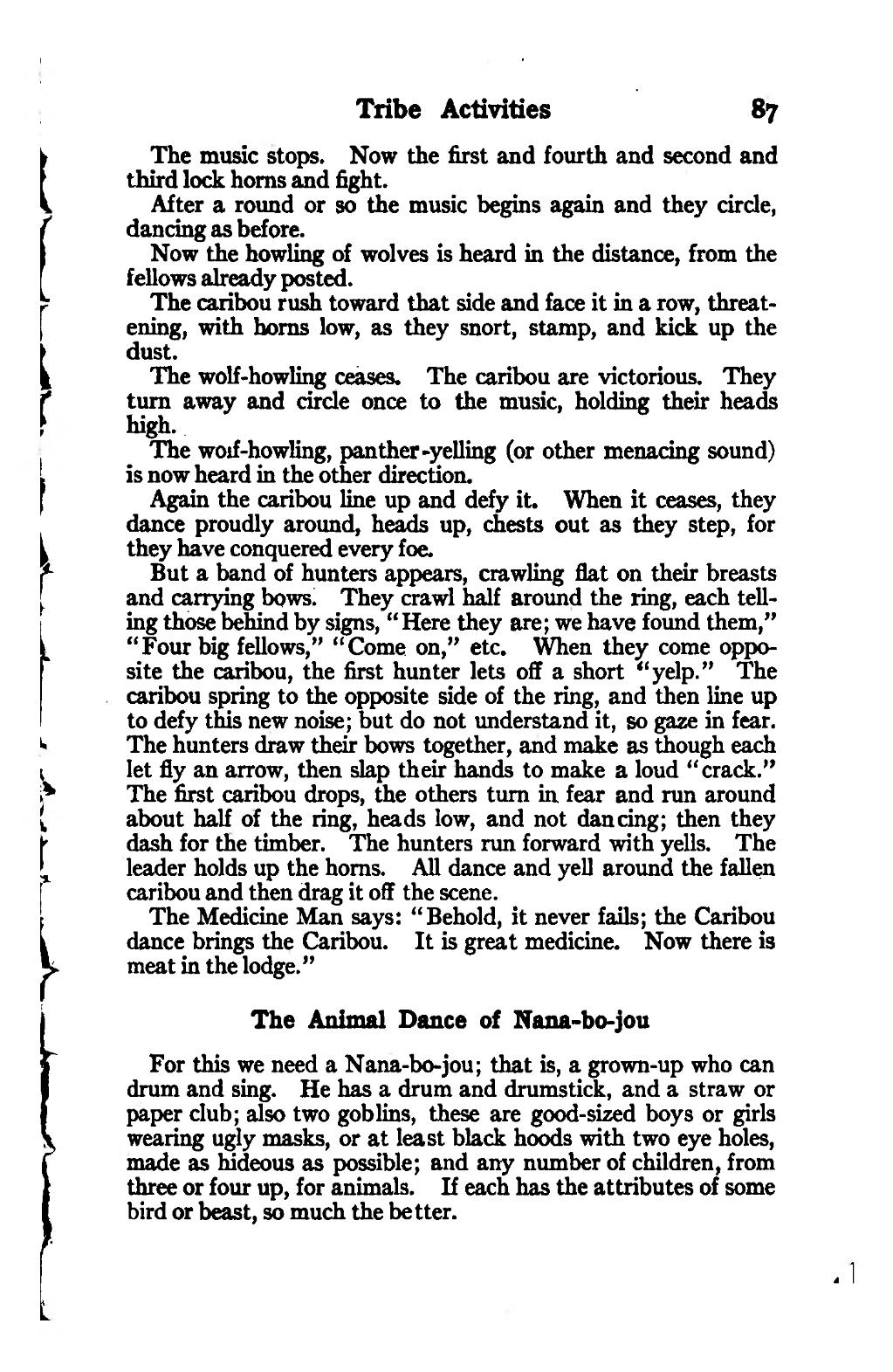