it offers the newest ﬁeld of purely city work, These are some of its headings:

Signs and blazes on the main street (a blaze or Indian sign is understood to be a simple mark conveying information without using words or letters). There are on Broadway at least ﬁfty signs and blazes descended from those used in the wilderness by savages; in some cases the very same mark 15 used. A totem is a simple form, usually a natural form used as the symbol of a man, a group of men, or an idea It has no reference to words, letters, or language. In this light, there are zoo or 300 totems of daily use in every big city. Some trademarks 'and all armorial bearings are of the nature of totems. Every great railway company has a totem, though it was not so ﬁfty years ago. The change has come because a totem is copyrightable, remembe‘rable, ad- vertisable, visible afar and comprehensible by all, no matter what the language or lack of learning may be.

The old sign language of the plains exists among us to the extent that over one hundred of the gesture signs are in daily use among the school children and the folk from Southern Europe. The policeman regulating the traﬂic uses at least ﬁfteen of these signs daily and hardly realizes it, yet every one understands them and obeys. Here they serve the same purpose as in the wilds; they convey information when it is impassible to be heard and they do it in the universal language of ideas which all can comprehend no matter what his speech may be.

The tracks of diﬁerent human beings as well as of dogs, cats, rats, mice, horses, sparrows, etc., are seen after every shower, when the gutter is wet and the pavements dry, as well as after a snowstorm; and they all have a story to tell to the eyes of woodcraft wisdom.

City craft— the knowledge of the things which are particularly a development of the city: how the streets are paved, how the garbage is disposed of, where the city water is obtained and its quality, these and many other things relating to making life in the city produce the best results, are an open ﬁeld. All of these and a thouSand more are to be found' in the city. And the value of city Woodcraft is not merely in the things themselves but' In being able to see the things about you. Begin to-day to see, comprehend, and master the ordinary daily things of your life. 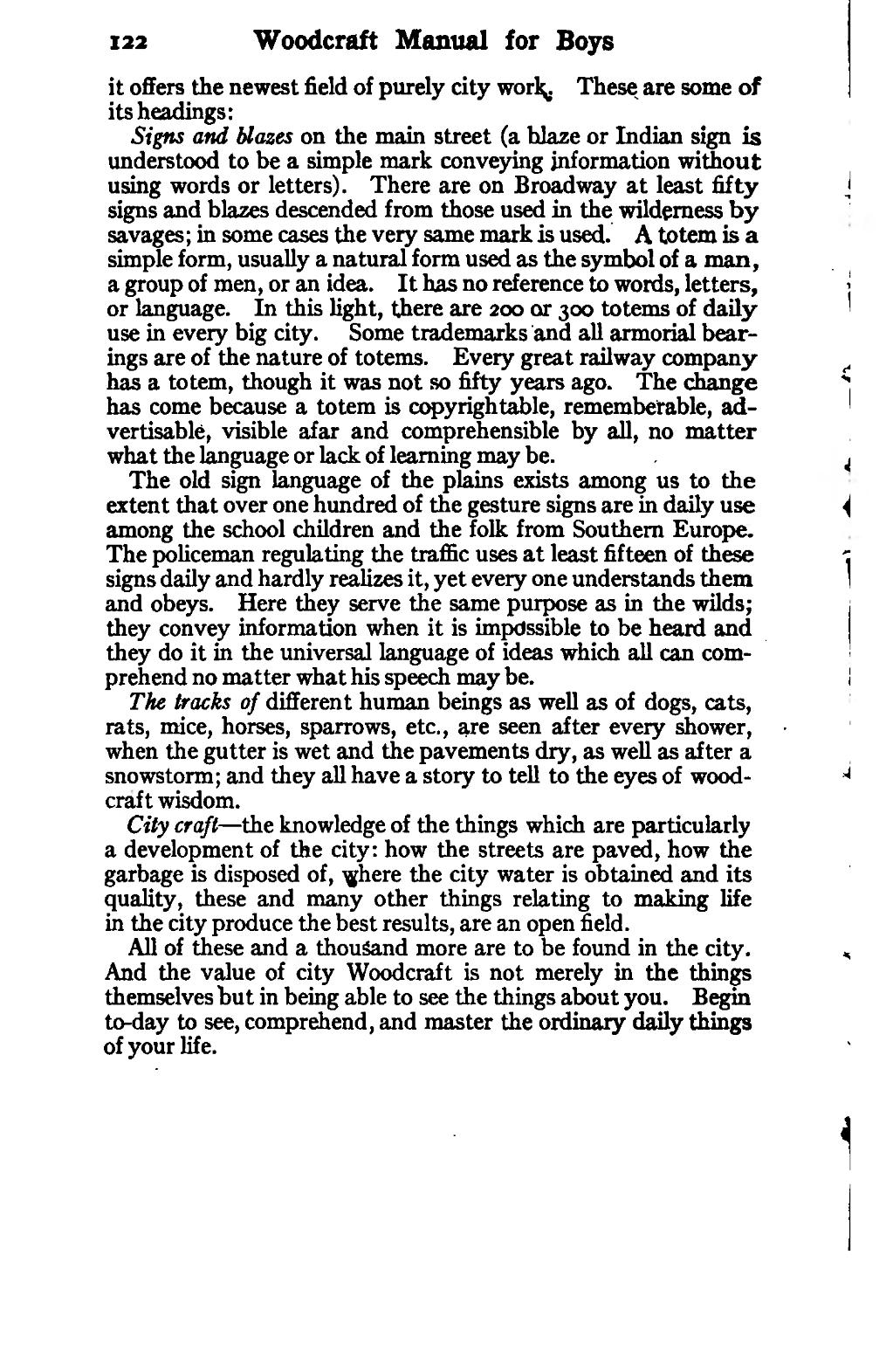