Tribe Activities Z15 whose name was Wo.* As he lay in his mother's arms, she loved him, but wondered: "His body is of my body, but whence comes the life—^the spirit whidi is like mine and yet not like it? " And his father, seeing the wonder in the mother's eyes, said, "Whence came he?" And there was no one to answer, and so they called him Wo, to remind them that they knew not whence he came. As Wo grew up, he was stronger and swifter of foot than any of his tribe. He became a mighty hunter. He knew the ways of all the wild things and could read the signs of the season. As he grew older, they made hun a chief and Ustened while he spoke at the coimcil board, but Wo was not satisfied. His name was a question, and questioning filled his mind. Whence did he come? Whither was he going? Why did the sun rise and set? Why did life burst into leaf and flower with the coming of the spring? Why did the child become a man and the man grow old and die? The mystery grew upon him as he pondered. In the morning he stood on a mountain top and, stretching out his hands, cried, " Whence? " At night he cried to the moon, " Whither? " He listened to the soughing of the wind in the trees and to the song of the brook and tri^ to learn their language. He peered eagerly into the eyes of little children and tried to read the mystery of life. He listened at the still lips of the dead, wait- ing for them to tell him whither they had gone. He went about among his fellows silent and absorbed, £dways looking for the unseen and listening for the unspoken. He sat so long silent at the council board that the elders questioned him. To their questioning he replied like one awakening from a dream: "Our fathers since the beginning have trailed the beasts of the wood. There is none so cunning as the fox, but we can trail him to his lair. Though we are weaker than the great bear and buffalo, yet by our wisdom we overcome them. The deer is more swift of foot, but by craft we overtake him. We cannot fly like a bird, but we snare the winged one with a hair. We have made ourselves many cunning inventions by which the beasts, the trees, the wind, the water, and the fire become our servants. "Then we speak great swelling words: 'How great and wise we are! There is none like us in the air, in the wood, or in the water!' But the words are false. Our pride is like that of a partridge drumming on his log in the wood before the fox leaps 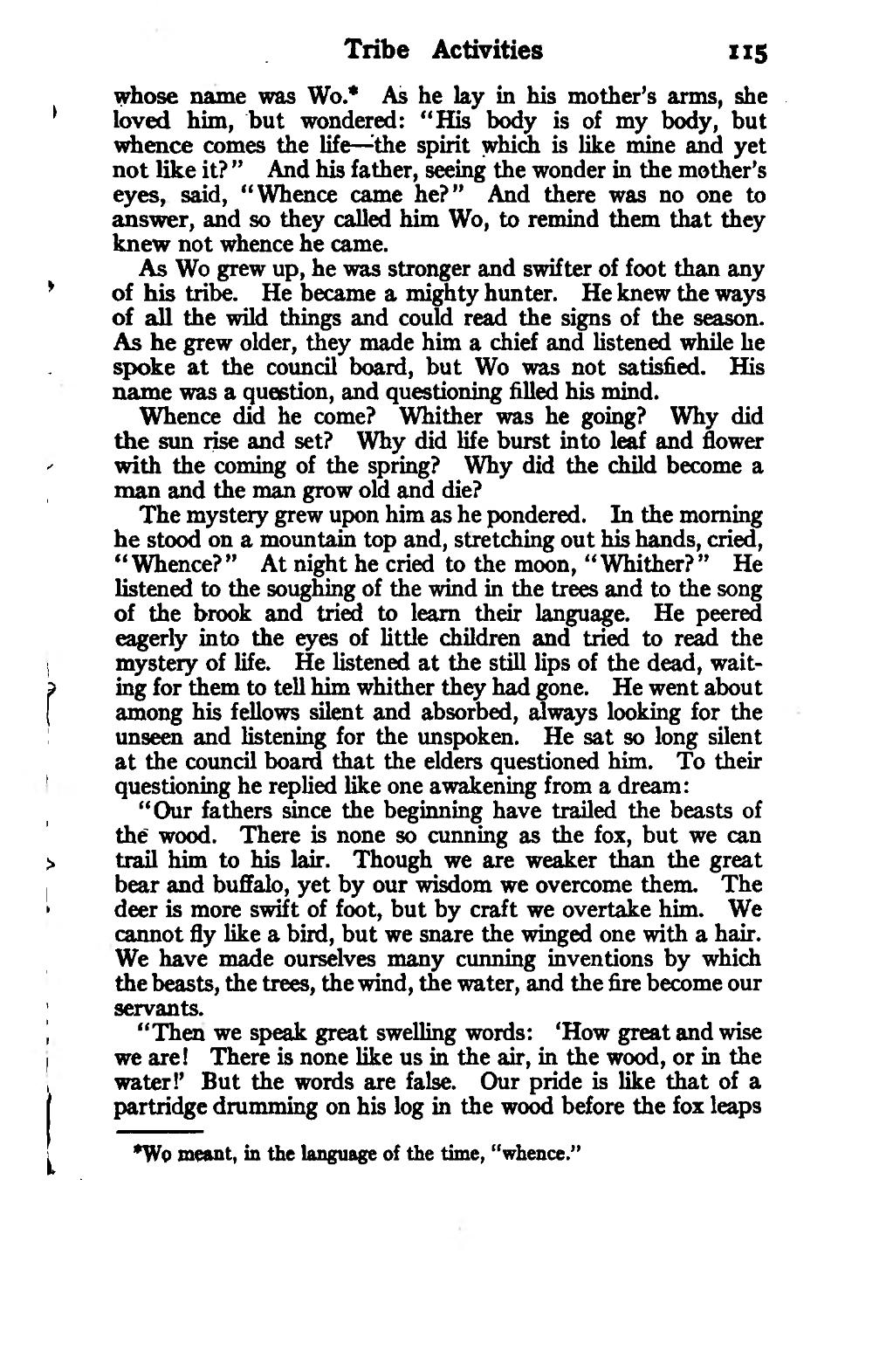