Woodcraft 83 'Each fifteeh days the stars seem to be an hour earlier; in three months they gain one fourth of .the ci?le, and in a year gain the whole circle. According to Flaremarion, there are about seven thousand stars visible to the naked eye, and of those but nineteen are stars of the first magnitude. -Thirteen of them are visible in the latitude of New York, the other six belong to the South Polar Region of the sky. Here is Flaremarion's arrangement of them in order of seeming brightness. Those that can be seen in the Southern Hemisphere only, are in brackets: x. Sirius, the Dog-star. ?. [Canopus, of Argo.] 3. [Alpha, of the Centaur.] 4. Arcturus, of BoOtes. ' $. Vega, of the Lyre. 6. Rigel, of Orion's foot. 7. Capella, of Auriga. 8. Procyon, or the Little D?g-star. 9- Betelguese, of Orion's right shoulder. xo. [Beta, of the Centaur.l xx. [Achemar, of Eridanus.] x2. Aidebaran, of Taurus, the Bull's right eye. x3. Antares. of Scorpio. x4. [Alpha, of the Southern Cross.] x$. Altair, of the Eagle. x6. Spica, of Virgo. z?. Fomalhaut, of the Southern Fish. xS. [Beta, of the Southern Cross.] x9. Regulus, of the Lion. Orion Orion (O-ri-on), with its striking array of brilliant stars, Betelguese, Rige[, the Three Kings, etc., is generally admitted to be the finest constellation in the heavens. Orion was the hunter giant who went to Heaven when he died, and now marches around the great dome, but is seen only in the winter, because, during the summer, he passes over during daytime. Thus he is still the hunter's constellation. The three stars of his belt are called the "Three Kings." Sirius, the .Great Dog-star, is in the head of Orion's houna, and following farther back is the Little D?-starJ Procyon. Digitized b?/?.2?OO-8?I(? 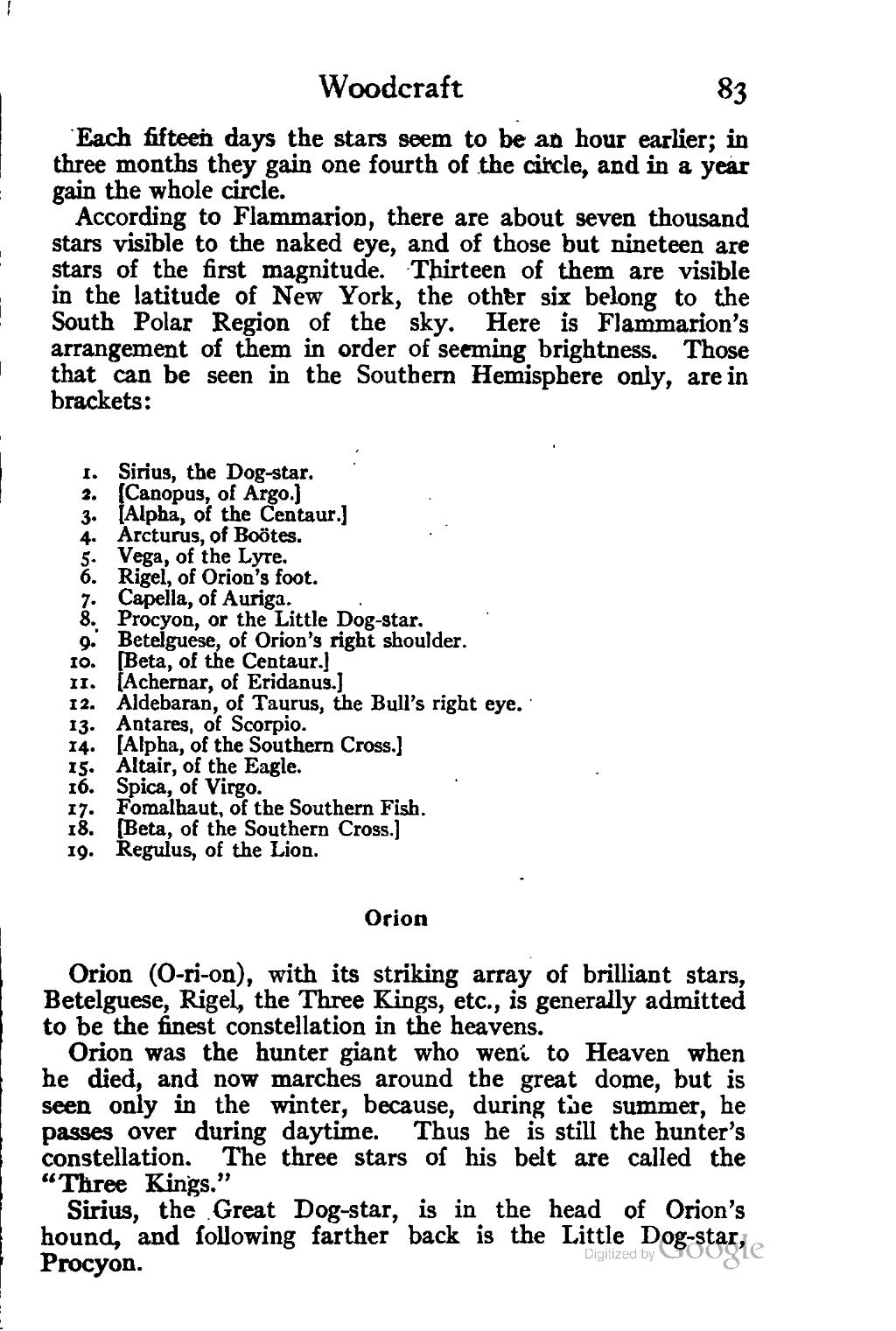