The Spartans of the West 23 Grandmother: let me live long; hold me good and strong. When I go to war, give me many ponies and let me count many "coups." In peace, let not anger enter my heart.'" (P- 309-) But the best account of the Indian's belief and mode of worship is given to us by Dr. Charles A. Eastman, himself a Sioux Indian; he has written of the things that were his daily life in youth. He says: "When food is taken, the woman murmurs a 'grace' as she lowers the kettle, an act so softly and unobtrusively performed that one who does not know the custom usually fails to catch the whisper: 'Spirit partake!' As her husband receives the bowl or plate, he likewise murmurs his invocation to the spirit. When he becomes an old man, he loves to make a notable effort to prove his gratitude. He cuts off the choicest morsel of the meat and casts it into the fire — the purest and most ethereal element." ("Soul of the Indian," igii, pp. 47-48.) "The first hambeday, or religious retreat, marked an epoch in the life of the youth, which may be compared to that of con- firmation or conversion in Christian experience. Having first prepared himself by means of the purifying vapor bath, and cast off, as far as possible, all human or fleshly influences, the young man sought out the noblest height, the most commanding sum- mit in all the surrounding region. Knowing that God sets no value upon material things, he took with him no offerings or sacrifices, other than symbolic objects, such as paints and tobacco. Wishing to appear before Him in all humility, he wore no clothing save his moccasins and breech-clout. At the solemn hour of sunrise or sunset, he took up his position, over- looking the glories of earth, and facing the 'Great Mystery,' and there he remained, naked, erect, sUent, and motionless, exposed to the elements and forces of His arming, for a night and a day to two days and nights, but rarely longer. Sometimes he would chant a hymn without words, or offer the ceremonial 'filled pipe.' In this holy trance or ecstasy the Indian mystic found his highest happiness, and the motive power of his exis- tence. " (" Soul of the Indian, " Eastman, pp. 7-8.) 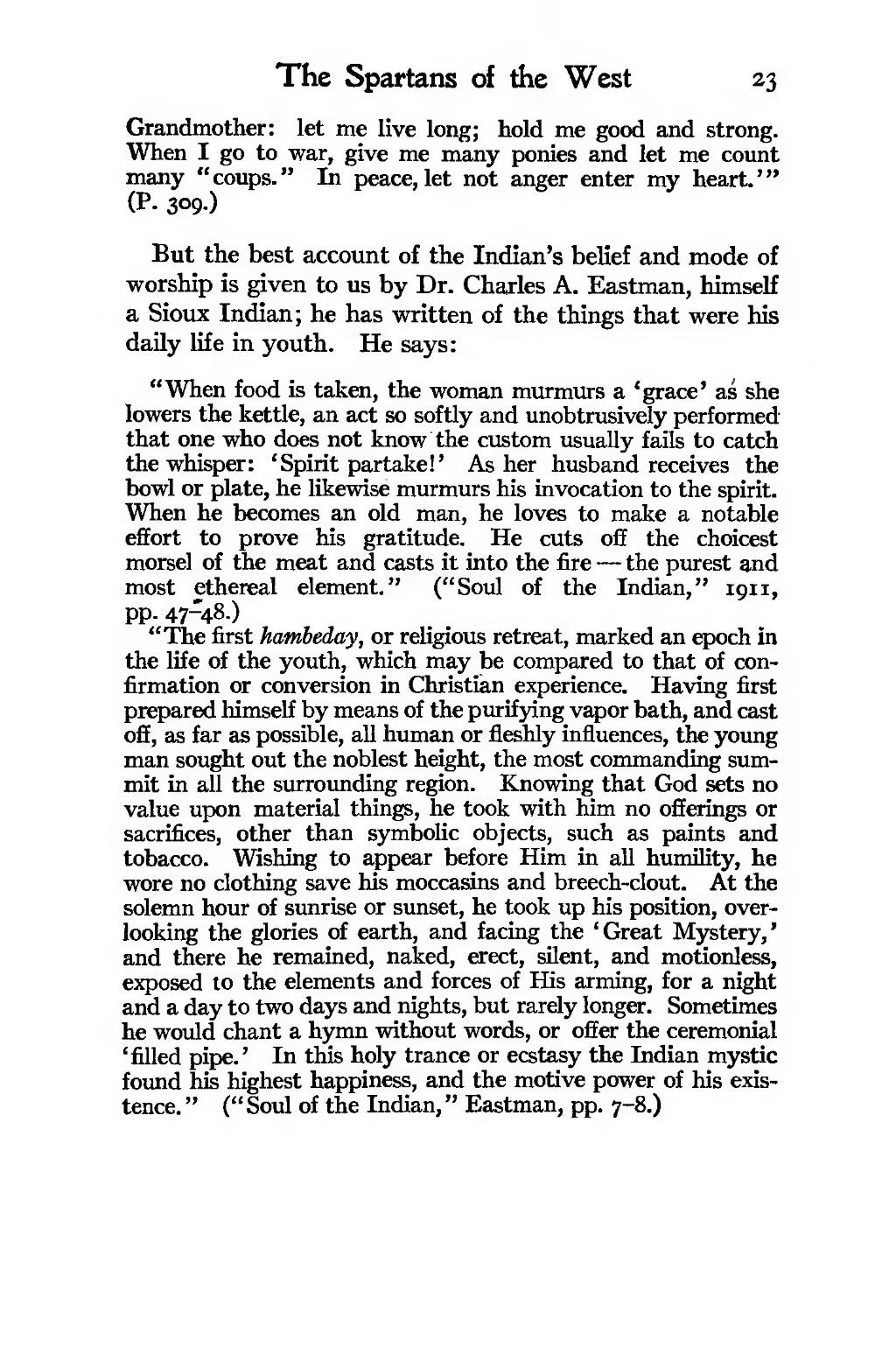