164 Woodcraft Birch Bark Roll IO1 (a) Bayberry Candles III D1 (a) IV G1 (a) By Juria M. BuTTREE The bayberry berries or drupes should be gathered in the fall, though not so late that the protective wax has been brushed off. It takes about two quarts of berries to make an 8-inch candle. Pick the berries from the stems, and put them on the fire in water to cover them. Let them stew for four hours, then simmer for another hour. Let the mass cool, and skim off the heavy green oil which has come to the surface. When it is quite cold, this 1s a cake of beautiful translucent wax. In order to clear this of all impurities, it is well to boil ‘this up in a kettle of water, and strain the liquid through a cheesecloth. Again, the wax will rise to the top in a cake when it is cold. If this wax has been put into a tin can, the can will serve as the inner dish of a double boiler. (In order to make the candle last longer, about 20% of paraffine should be added at this stage.) When all is melted, it is ready for the next step. The candles may be made by either of two methods,— moulding or dipping. A mould may be made of paper. P. L. Sperr, of the Wikantanka Tribe of Staten Island, New York, describes the making of his moulds as follows: “T found that a convenient method was to use a cork about 5g of an inch in diameter for the base. I cut a small hole in the center of one end of the cork, about large enough to hold a knot in the wick. Tying a knot at the end of the wick, I then passed it through the center of a piece of paper which would cover the cork. The paper was pasted onto the cork, and the wick thus held in place. The mould was then completed by making a cylinder of wrapping paper, with the cork at one end and the wick running through the center. I found the adhesive paper tape used for wrapping packages, a convenience in making the moulds. I used it for the bit of paper which held the wick. The seam of the paper cyl- inder was closed with it, and it was used to bind the cylinder to the cork. “Into this mould the melted wax was poured, and there came out a beautiful candle of the richest green.” 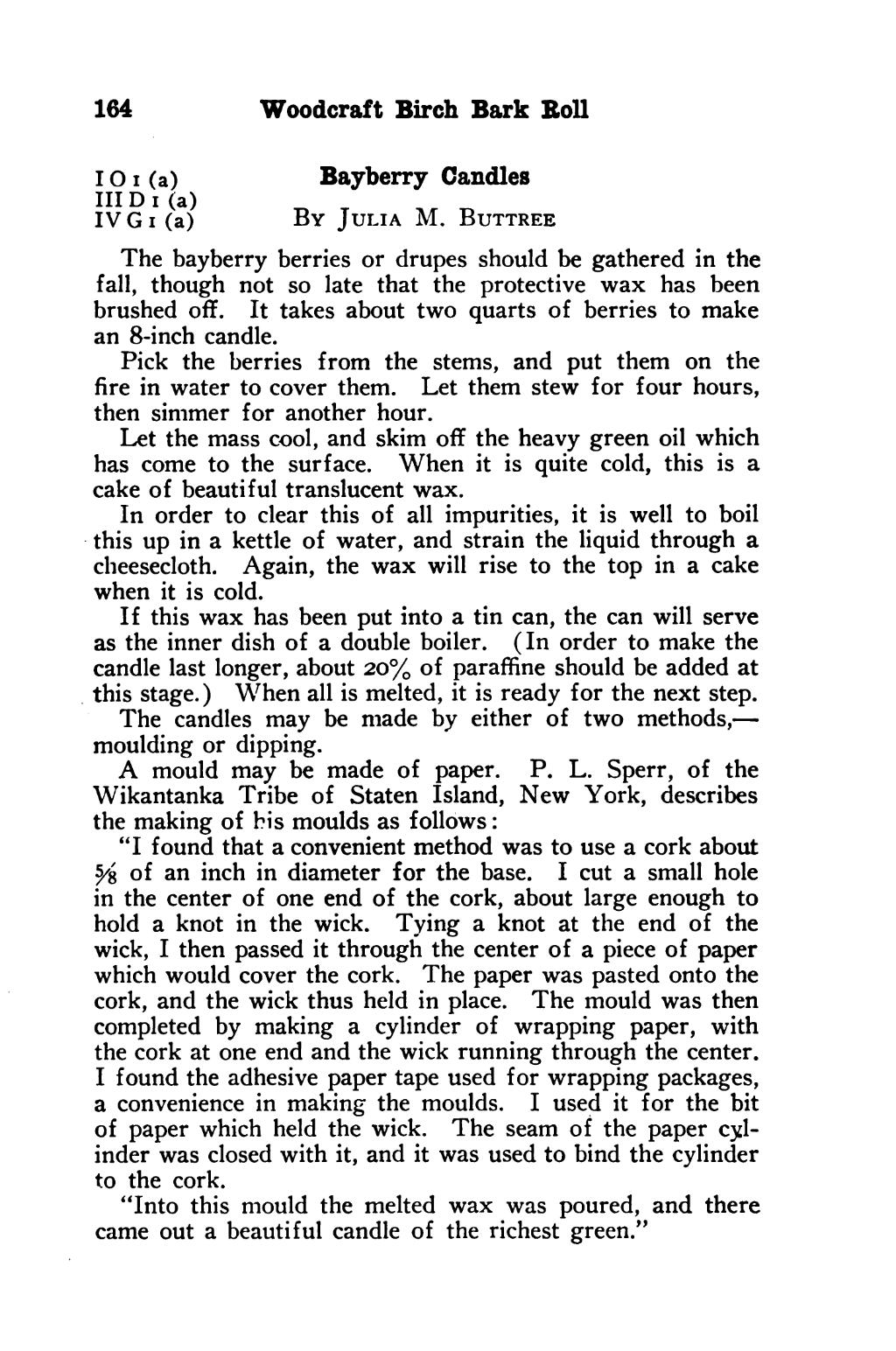