224‘? Woodth Manual 'for Boys If the tree-leans much the wrong way, you can push it over by guide or spring poles. Thus the tree F is leaning to the east, but a strong brace planted at G will make it fall to the south, if you cut the tree chieﬂy on the south side and leave the last uncut ﬁbres of wood to run east and west, so they act as a hinge. This hinge is very important at times. In the section H the tree may be inclined to fall toward I, but it is easiest to bend the hinge at right angles to its main length so the angle of the hinge will throw it toward J, if there is no wind and the tree does not lean too much. ‘ _ Another well-known device is the spring pole. To make sure of the tree K falling toward L, put in a spring pole M, as long and as heavy as you can manage, force it in and have it bent down so that it is pushing against the tree. In some cases, sev- eral of these poles are put in. Two are, of course, twice as powerful as one, and when the tree is cut at the L side, the poles push it that way. These were very familiar woodsman’s tricks in my young days, but they are now largely displaced by the saw. The plan being to notch the tree at N, then saw it in at 0 until large iron wedges may be driven in behind the saw as it sinks into the trunk, and the tree is inevitably thrown toward N, usually in a line at right angles to the cut of the saw. A clever woodsman can throw a tree so exactly where he wants it that he can make it drive a given stake. A good axeman can fell a six-inch tree in a minute. When one is cutting a sapling, it helps greatly if the tree be bent over, then one blow of the axe on-the bulge of the bend will usually cut it off, whereas a dozen might be needed if the tree were‘not pulled over ﬁrst. To cut a large log on the ground, the axeman stands on it and cuts between his wide-spread feet; cutting half through each side and keeping the kerfs or cuts plumb, P Q (see illustration). If it were cut through entirely from one side as at R, the labor would be double, because fully twice as much wood must then be removed. For a small log, it is easier to stand on the ground and cut more nearly on the upper side till halfway through, then roll the log half over and make the other cut. A Waterproof Shelter of Wilderness Stuff If you have plenty of spruce, balsam, or hemlock boughs avail— . , able to furnish a roof thatch, it is easy to make a lean-to. This ____./ ._ "5-. A r ,-' -M‘ﬂ -_”‘_M I... 3 ’1 ‘M/.. AA __ A. ___.“ 4:1— .. 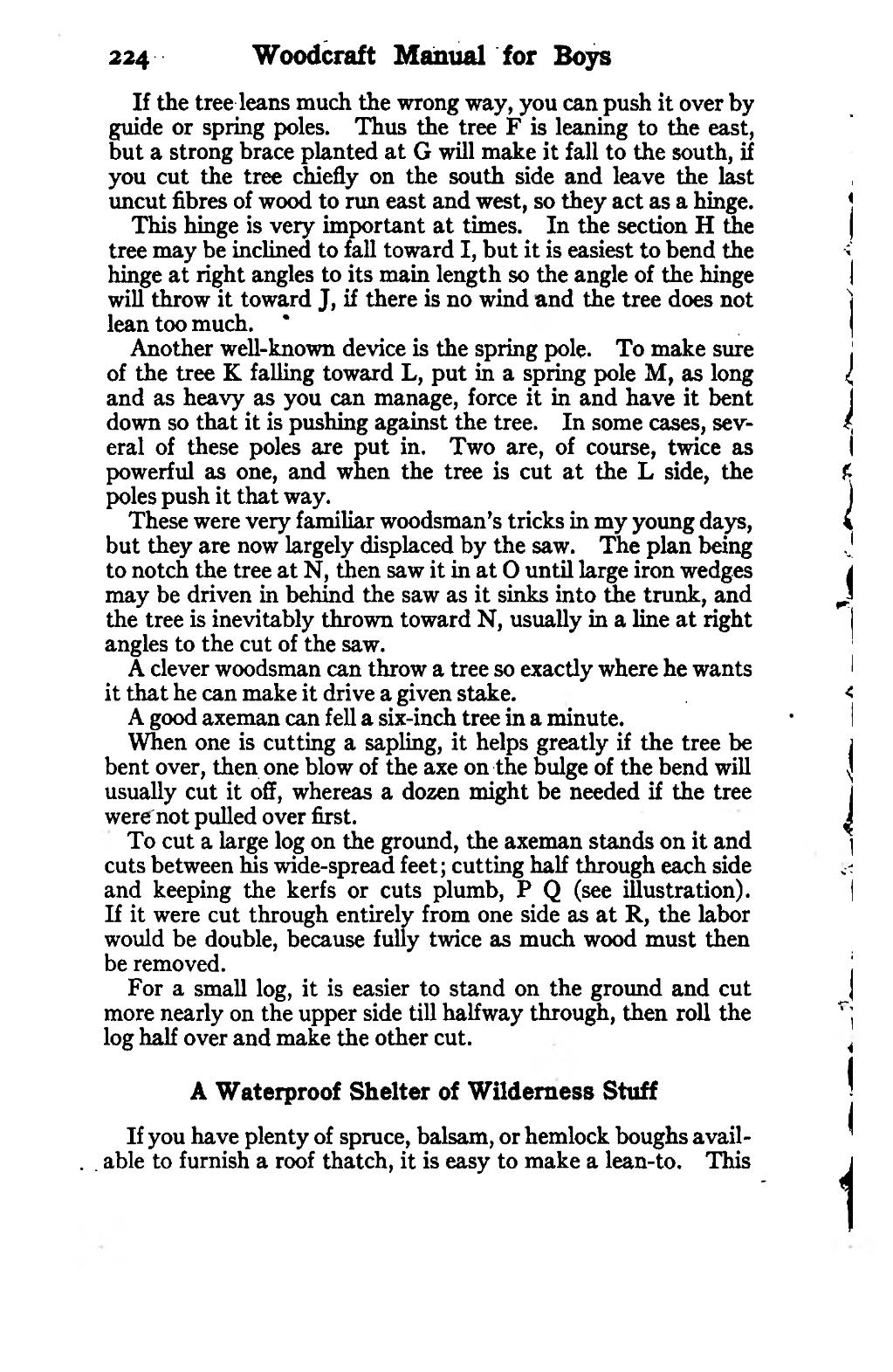