Manual of the Woodcraft Indians 61 Rubbing-slick Fire. Light a fire with a fire-drill or rub- bing-sticks, with material of one's own gathering, counts coup; to do it in one minute counts grand coup. Water Boiling. Boil one quart of water in a 2-quart pail in 1 1 minutes for coup; in 9 minutes for grand coup. Allowed one log, one match, one axe or hatchet. The water is boiling when jumping and bubbling all over the surface. Axeman. To chop down three 6-inch trees in succession in 60 seconds each, throwing them to drive each a given stake, coup; in 45 seconds each, grand coup. Knots. To make 30 different standard knots in a rope, for coup; 50 for grand coup. Lasso. To catch 10 horses or cattle in corral, with 10 throws of the lasso, counts coup; to catch 10 on the range in 10 throws counts a grand coup. Lasso. To catch a horse or beef by each of his four feet in four successive throws, grand coup. Lasso. To catch, throw, and "hog-tie" a beef or horse in 2 minutes for coup, in i^ minutes for grand coup. The record is said to be 40 seconds. Diamond Hitch. Pack a horse with not less than 100 pounds of stuff, with diamond hitch, to hold during 8 hours of travel, coup. Ten days in succession, a grand coup. Size Guessing. To guess one inch, one foot, one yard, one rod, one acre, 100 yards, 200 yards, one quarter mile, one half mile, and a mile, within 20 per cent, of average error, for coup; 10 per cent, for grand coup. Height and Weight Guessing. To guess the height of 10 trees or other high things, and the weight of 10 stones or other things ranging from one ounce to 100 pounds, within 10 per cent, of average error, for coup; 5 per cent. for grand coup. Gauging Farness. To measure the height of 10 trees without climbing, or 10 distances across a river, etc., with- 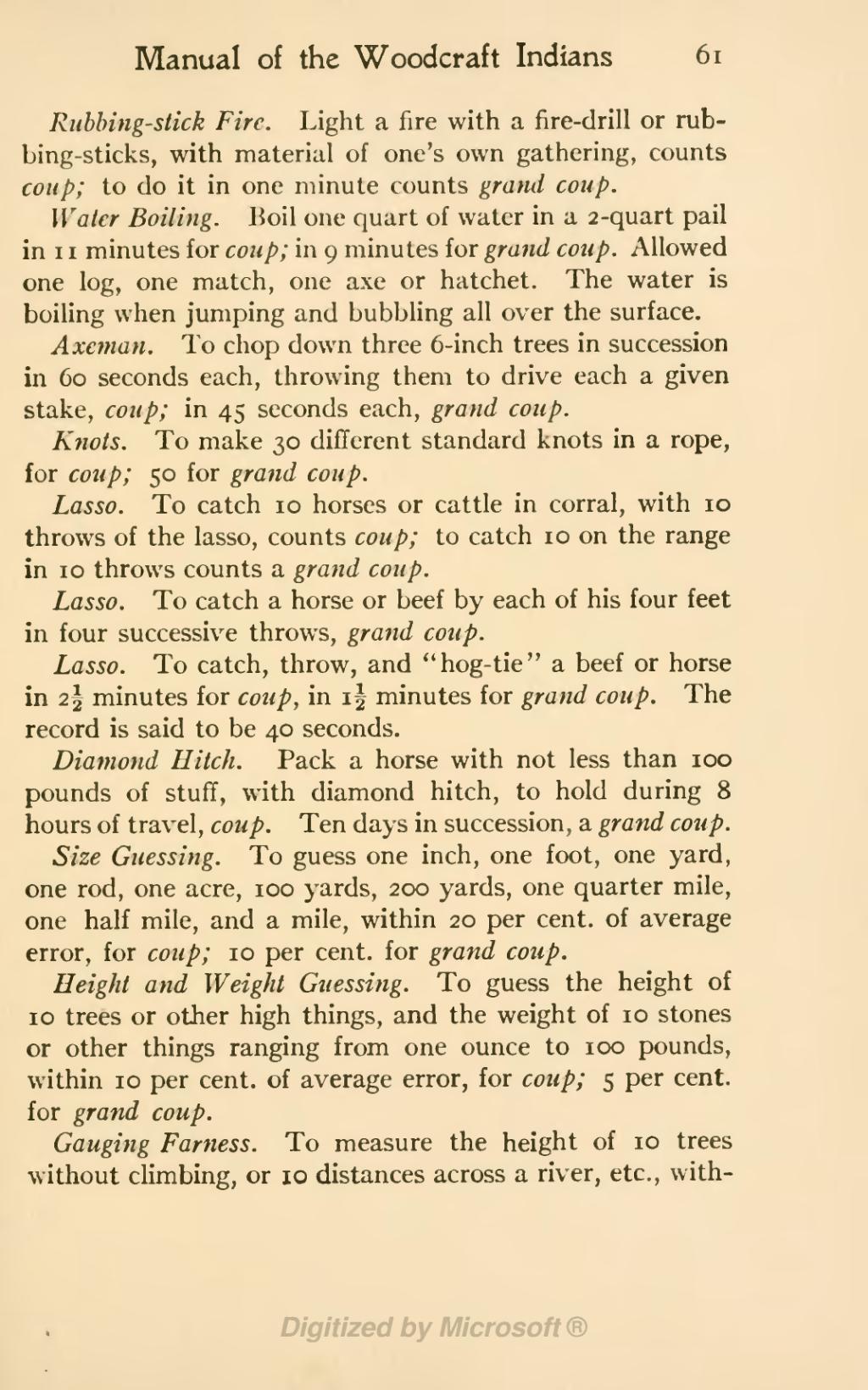