338 Boy Scouts wilderness. He grew up not knowing many people, but some- how in his up-coming there was developed in his life a great heart full of tenderness and kindly feeling. Doubtless it was the very hardships of life that made him what he was. At auy rate, he was one of the greatest and noblest figures in all history. He was called "Honest Abe" by those who knew him because always, even in little things, he wanted to see perfect justice done; and thus it was, when he came to things of large impor- tance, that the man was only a boy grown tall, not only in stature but in the things that make for righteousness in a nation. The Spanish-American War--1898 The war with Spain was not of this country's seeking. The island of Cuba, whose distress had amused the sympathy the whole world, was our near neighbor, and to sit idly by and witness the inhuman treatment practised by the Spanish soldiery upon the helpless islanders would hardly be a part creditable to any people. It was not our intention at first to do other than to relieve the suffering and distress of Cuba, near at hand, and fh? we tried to do peaceably in the supplying of food and other necessities of life. As the next step, the United States sent a remonstrance to Spain telling her she should send a more humane governor to the island. But as matters grew worse instead of better, even under a change of governors, the sympathy of the United States became daily more deeply enlisted in the /reedore of the Cubans. The battle%hip Maine was sent to Havana Harbor to pro- tect, if need be, the Americ?_n.? and American interests in Cuba. On the night of February xSth , x898 , an explodon occurred, sinking the ship almost immediately. With the destruction of the Maine- wbethcr by accident or intent -- with the appalling loss of two hundred and fifty- six men, including two officers, relations with Spain became more and more strained, until war seemed inevitable. ' On April x898, President McKinley in a special message to Congress, said: "In the name of humanity and civilization, the wax in Cuba must stop." War indeed was formally dealaxed April 2$th, and in the bdef space of one hundred and fourteen days history had added to its annals: the blockading of Cuban ports whereby the Spanish ficct was trapped; the invasion and siege of the island by United States regulars, volunteers. and wugk?'iders; the Digitized by g?g(? L?.?. 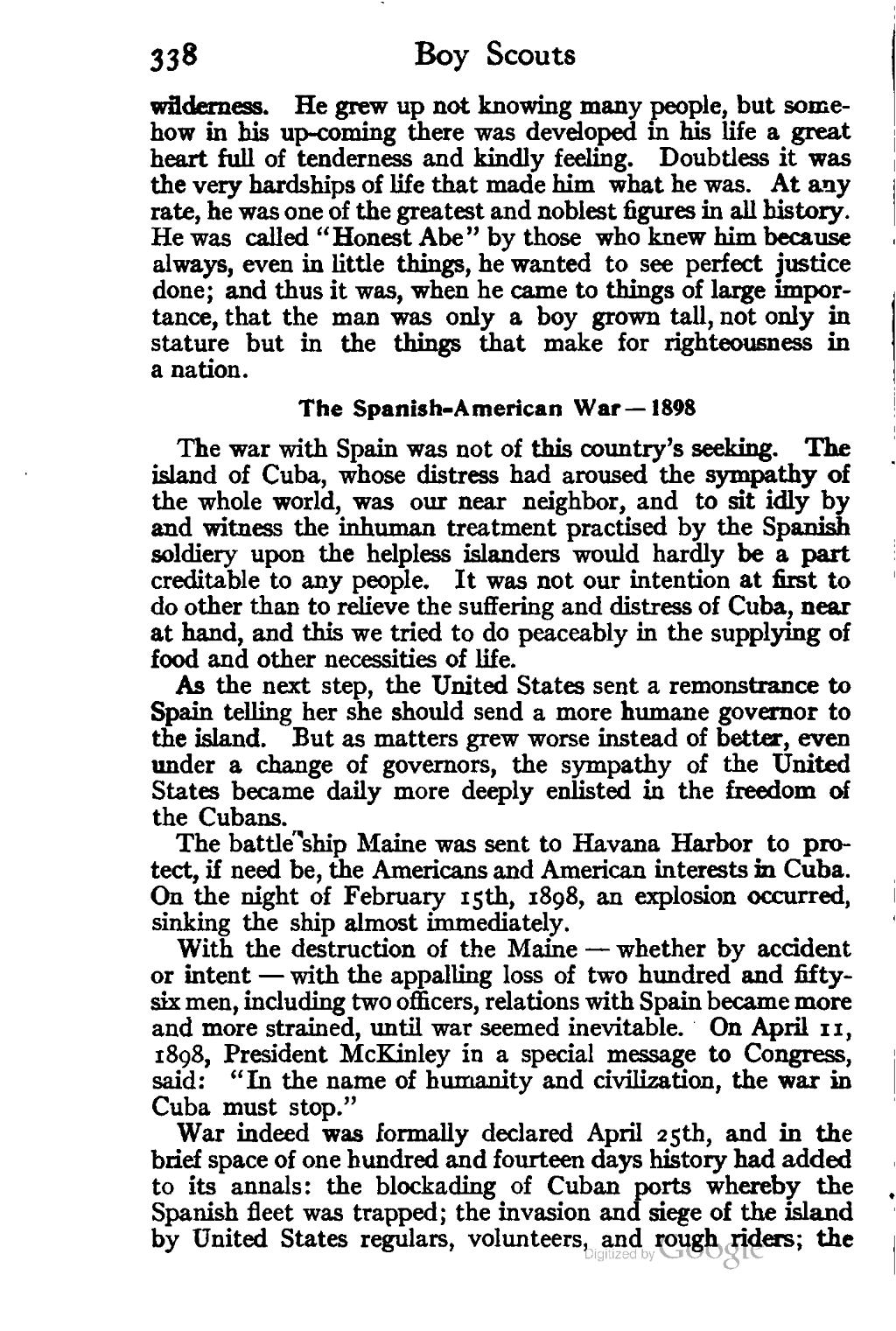