Scoutcraft I I A local council through its officers -- president, vice-preSident? secretary, treasurer, and scout commissioner, its executive com- mittee, court of honor, and other committees m deals with all local matters that relate to scouthag. The scout cowmi-e. sioner is the ranking scout master of the local council and presides at all scout masters' meetings as well as at all scout field meets. It is also the duty of the scout commi.?sloner to report to and advise with the Chief Scout through the Executive Secretary concerning the scouts in his district. The scout commi.?qloner's certificate is issued from National Headquarters upon the recommendation of a local coundl after this council has been granted a charter. The scout master is the adult leader of a troop, and must be at least twenty-one years of age. He should have a deep interest in boys, be genuine in his own life, have the ability .to lead, and command the boys' respect and obedience. He need not be an expert at scoutcraft; a good scout master will discover experts for the various activities. His certificate granted upon the recommendation of the local council. An assistant scout master should be eighteen years of age or over. His certificate is granted by the National Council upon the recommendation of the scout master of his troop and the local council. Chie! Scout and Staff The Chief Scout is elected annually by the National Council and has a staff of deputies each o whom is chMrmun Of committee of SCOUtcraft. These deputies are as/ollows: Chief Scout Surgeon. Chie? Scout Director of Health. Chief Scout Woodsman.' Chief Scout Athletic Director. Chief Scout Stalker. Chief Scout Citizen. Chief Scout Master. Chid Scout Director o/ Chivalry. Ch/ef Scout Camp Master. Scouts are graded as follows: Chief Scout and Staff. Scout Comm{r-?oner. Scout Master. Assistant Scout Master. Patrol Leader. Assistant Fatrol Leader. Eagle Scout. Star Scout. Life Scout. First-class Scout. Second-class Scout. Tenderfoot. How to Becomo a Boy Scout The easiest way to become a boy scout is to join a patro! that has already been started. This patrol ?bB?/n?le 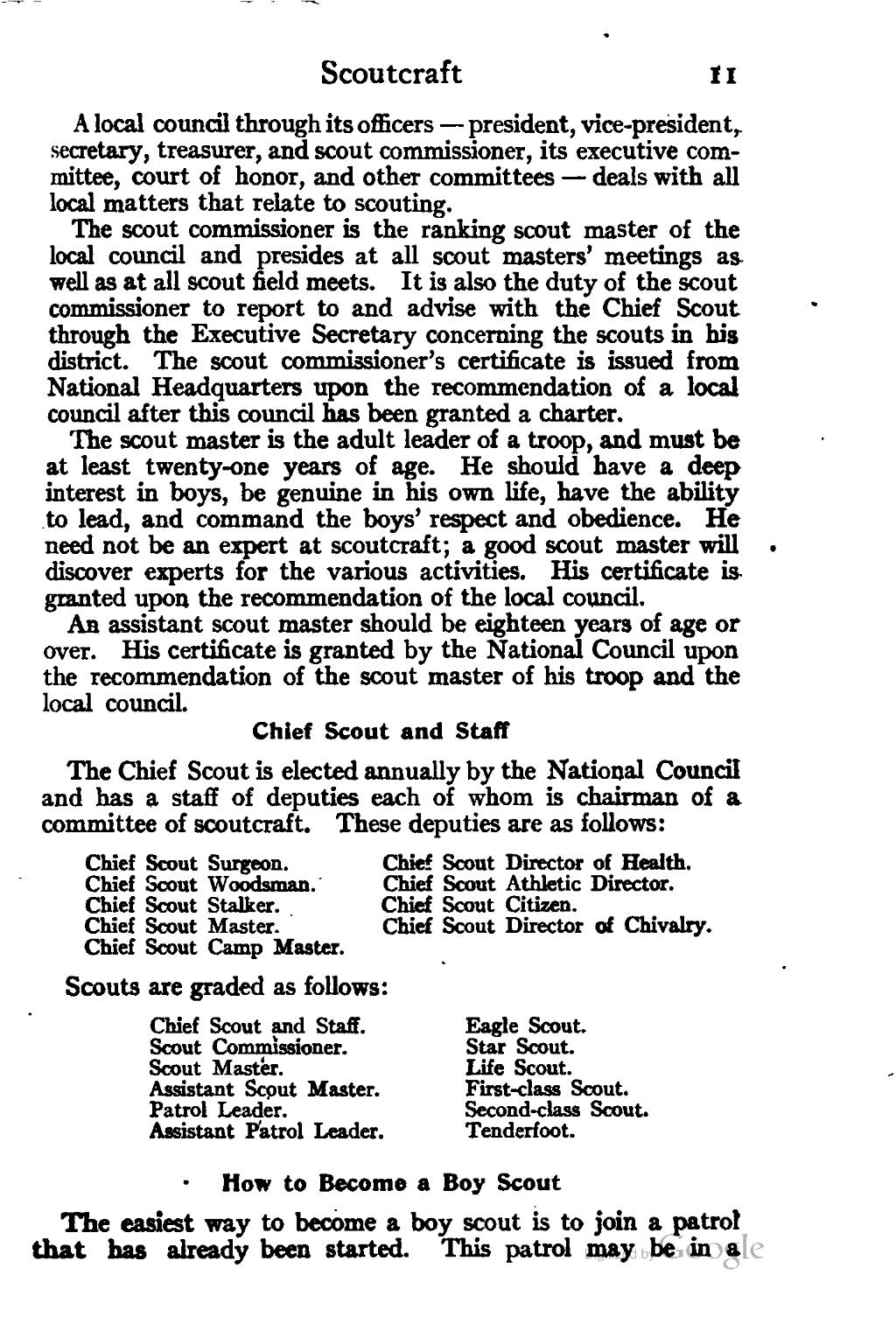