From thewoodcraft.org
Revision as of 23:36, 31 October 2016 by Keny (talk | contribs) (→‎Nebylo zkontrolováno: Založena nová stránka s textem „Tribe Activities When they came to Niagara where it thundered down, the Gitch-e 0-kok-o-hoo began bawling to drown the noises of it, but could not mak…“)
(diff) ← Older revision | Latest revision (diff) | Newer revision → (diff)
Jump to navigation Jump to search
Tato stránka nebyla zkontrolována

When they came to Niagara where it thundered down, the Gitch-e 0-kok-o-hoo began bawling to drown the noises of it, but could not make himself beard. " Wa-wa-wa," said the Gitch-e O-kok-o-hoo, with great effort and only for a minute. " WA-WA-WA- WA," said the river, steadily, easily, and for- ever. "Wa-wa-wa!" shrieked Gitch-e O-kok-o-hoo; but it was so utterly lost that he could not hear it himself, and he began to feel small; and he felt smaller and smaller, until he was no bigger than a sparrow, and his voice, instead of being like a great cata- ract, became like the dropping of water, just a little Tink-tank-tink, Tink-tank-tink. And this is why the Indians give to this smallest of the Owls the name of " the water-dropping bird." When the top is wider than the root, the tree goes down. The Story of Corn-smut Girl f Long A| one of the Hopi villages was a handsome young man ' Rainbow Youth. Every day before sunrise he practised ig, and made offerings to the Sun and to the other gods, he might become strong and swift. During the day and light he remained in the house. ie day he announced that he would marry the girl whose meal was ground so fine that it would stick to a large shell , . ,ing on hb wall Then all the girb began to grind meal, lAMfto make it just as fine as they could. For all ^e maidens ed greatly to marry this handsome young man. lie ^ter another they came to the home of Rainbow Youth threw their meal against the shell. But it always fell to loor, and the maidens, one by one, would go away ashamed. jw in this village Uved Com-smut Girl, and she was dark- led and dirty. Her brothers teased her, asking why she

" ]they laughed and said they did not think Rainbow Youth d keep u& promise if her meal should stick to the shell, "len Com-smut Girl had her meal ready, she took it in a

t to the young man's house. He spoke kindly, and asked 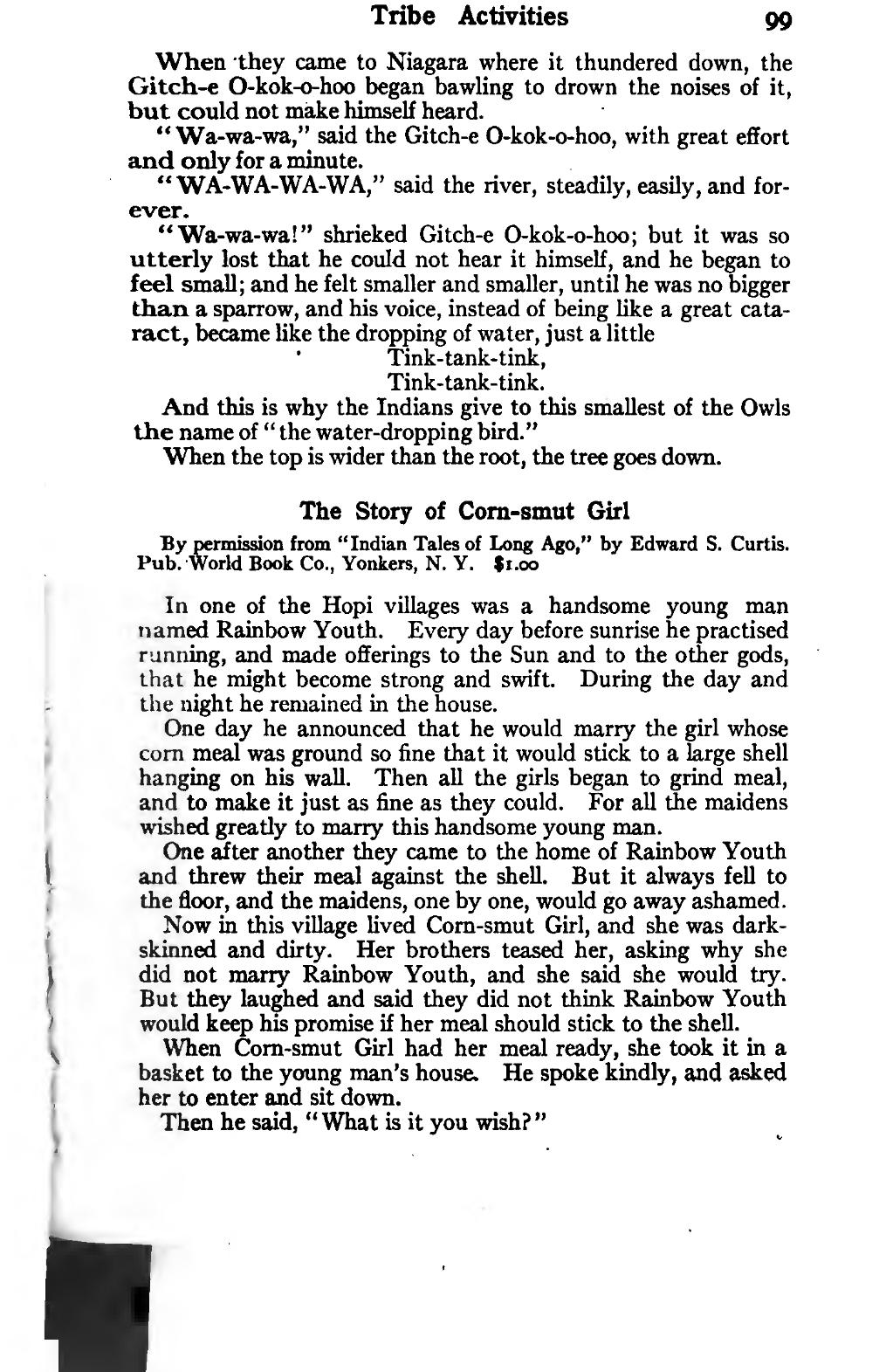