From thewoodcraft.org
Revision as of 09:40, 13 September 2018 by Keny (talk | contribs) (→‎Nebylo zkontrolováno: Založena nová stránka s textem „Woodcraft 7i fire, if you knowhow; and hopeless, if yon dont. I. have taught many boys'and'men (including some Indians) to.do it, and some have gown s…“)
(diff) ← Older revision | Latest revision (diff) | Newer revision → (diff)
Jump to navigation Jump to search
Tato stránka nebyla zkontrolována

Woodcraft 7i fire, if you knowhow; and hopeless, if yon don?t. I. have taught many boys'and'men (including some Indians) to.do it, and some have g?own so expert that they make it nearly as quickly as with an old-fashioned sulphur match. When I first learned from Walter Ito?h, who Ieaxr?ed from' the Indi?m? it took me from live to ten miautes to get a blazing rite- not half an hour, as some books have it. But later I got it down to a minute, then to thirty-one seconds from the time of taking up the rubbing-sticks to having a fine blaze, the .time in getting the first spark being about six seconds. My early efforts were inspired by book accounts of Indian methods, but, unfortunately, Ihave never yet seen a book ac- count that was accurate enough to gtdde any one successfully in the art of fire-making. All omit one or other of the absolute essentials, or dwell on some triviality. The impre,ion they leave on those who know is that the writers did not. The surest and easiest method of making a friction fire is by use of-the bow-drill. Two sticks, two toois, and some tinder are heeded. The two sticks are the drill and the fire-board, or fire-block. The books generally tell us that these must be of different kinds of wood. This is a mistake. I have uniformly gotten the best results with two pieces of the same kind -- all the better, indeed, if they are parts of the same stick. What Kind of Wood This is a very important question, as woods that are too hard, too soft, too wet, too ofiy, too gummy, or too resinous will not produce fire. The wood should be soft enough to wear away, else it produces no punlr, and hard enough to wear slowly, or the heat is not enough to light the punk, and, of course, it should be highly inflammable. Those that I have had the best luck with are balsam fir, cottonwood roots, tamarack, Euro- Dean latch, red cedar, white cedar, Oregon cedar, basswood, cypress, and sometimes second-growth white pine. It should always be a dry, sound stick, brash, but not in the least punky. In each part of the country there seems to be a kind of wood well suited for fire-making. The Eastern Indians used cedar; the Northern Indians, cedar or balsaan .fir; the plains Indians used cottonwood or sage-brush roots. Perhaps the most' reliable of all is dry and seasone, O. balsam fir; either the species in the North woods orV?z.?he?? will do. It gives a fine big spark or coal in about seven seconds. 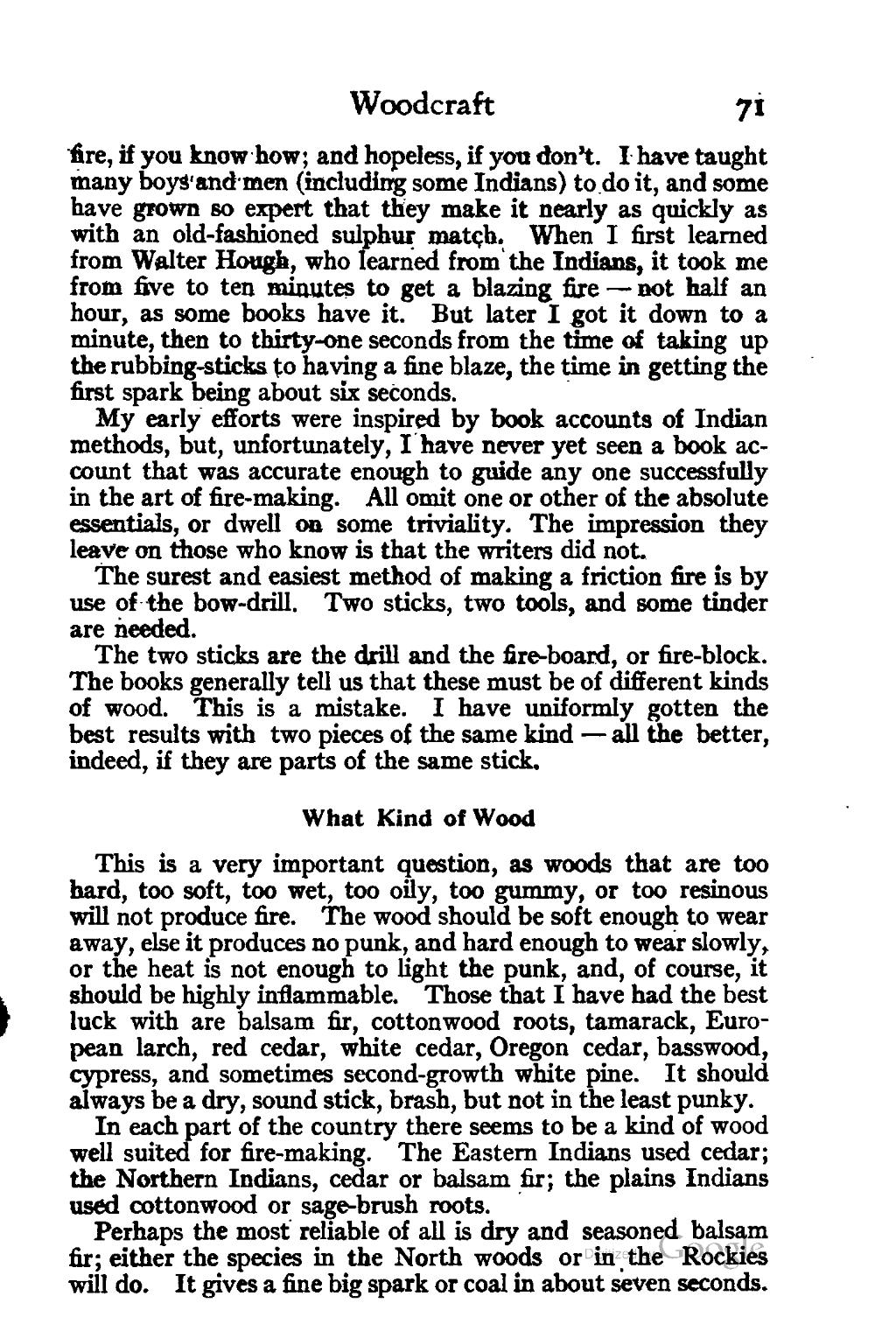