From thewoodcraft.org
Revision as of 08:44, 14 September 2018 by Keny (talk | contribs) (→‎Nebylo zkontrolováno: Založena nová stránka s textem „344 Boy Scouts twenty-two. He must be of good moral character, must pass the physical examination, must be able to write English, and take the oath of a…“)
(diff) ← Older revision | Latest revision (diff) | Newer revision → (diff)
Jump to navigation Jump to search
Tato stránka nebyla zkontrolována

344 Boy Scouts twenty-two. He must be of good moral character, must pass the physical examination, must be able to write English, and take the oath of allegiance. Naval Militia In the District of Columbia and in twenty of the states we have what is known as the naval militia. The assistsat secre- taxy of the navy stands in a special relation to the naval militia through the governor and the adjutant-general of the several states. The naval militia holds the same relation- ship to the navy that the national guard does to the United States army. Naval Academy The United States Naval Academy is at Annapolis, Md. The students axe called midshipmen, and candidates for ap- pointment must be between the ages of 'sixteen and twenty. The appointment of candidates is made as at West Point- through senators and congressmen and the President, the only difference being in the number of appointments that may be made: each senator and representative may be represented by two midshipmen at Annapolis, while at West Point he is rep- x?sented by but one cadet. The President has the appoint? ment of seven men to the Naval Academy ? two from the District of Columbia and five from the United States at large. He may also appoint one from Porto Rico, who must be a n?tive. The midshipmen's course is six years- four at Annapolis, and two at sea. The pay is $?oo per year. Civil Service In the administration of the government of the United States, thousands of men and women axe employed in the various offices at W?-?hington, and axe sometimes termed the great "peace In one period of our country's history, it was believed that each President, when he came into office, had the right to turn out of office every person employed by the government in any of its dvil departments, should it please him to do so, and to put into office trls own friends or the/r/ends of kis party. This right was claimed on the ground that "to the victor belong the sixdis" --a theory of government administration that has been severely dealt with and reformed through what is known as the "Civil Service Act." The Civil Serviclr-Ag?,:sl? passed Digitized by 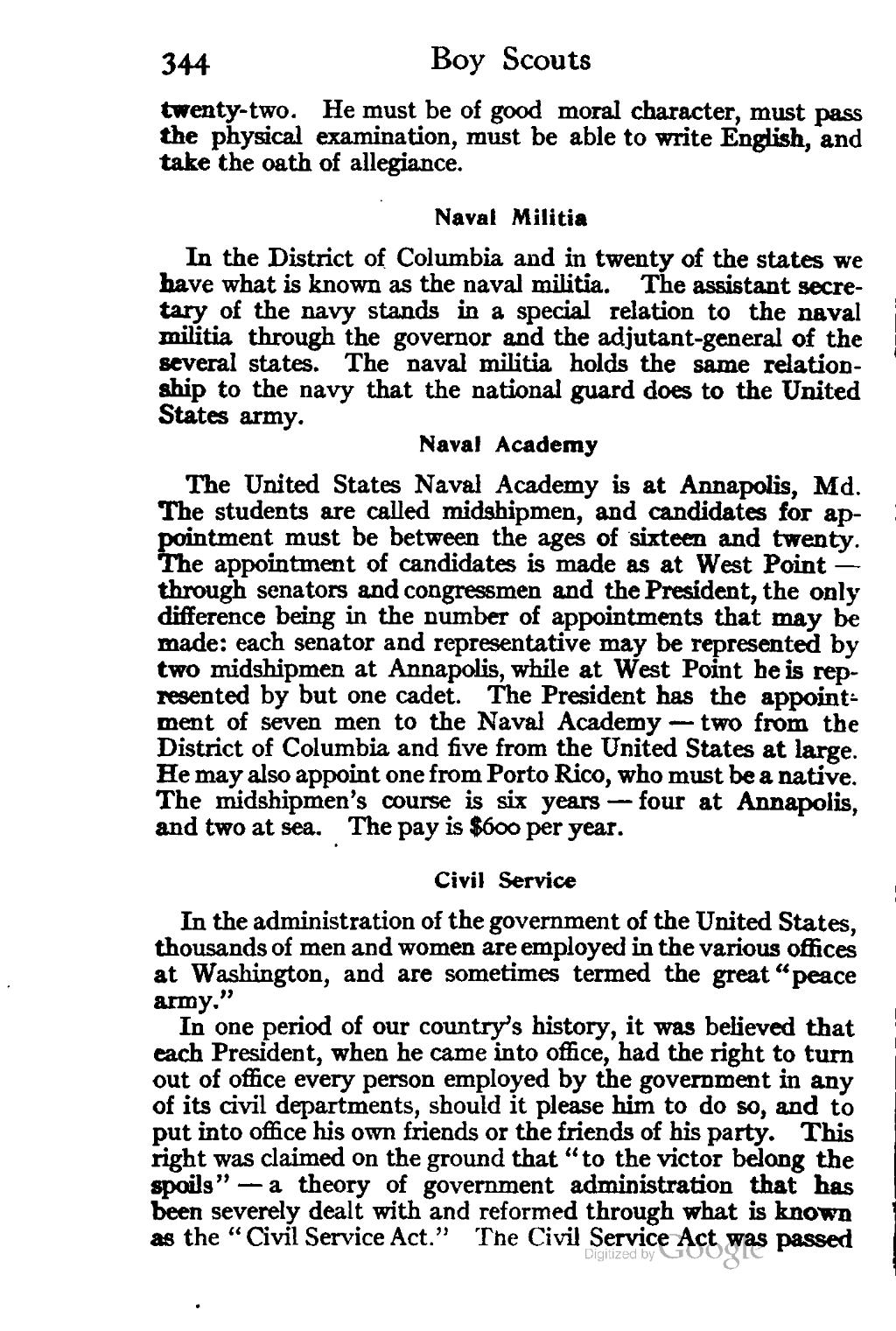