From thewoodcraft.org
Revision as of 21:38, 12 September 2018 by Keny (talk | contribs) (→‎Nebylo zkontrolováno: Založena nová stránka s textem „lo Boy Scouts And then the final and chief test of the scout is the doing of a good turn to somebody every day, quietly and without boasting. This is th…“)
(diff) ← Older revision | Latest revision (diff) | Newer revision → (diff)
Jump to navigation Jump to search
Tato stránka nebyla zkontrolována

lo Boy Scouts And then the final and chief test of the scout is the doing of a good turn to somebody every day, quietly and without boasting. This is the proof of the scout. It is practical religion, and a boy honors God best when he helps others most. A boy may wear all the scout uniforms made, all the scout badges ever manufactured, know all the woodcraft, campcraft, scoutcraft and other activities of boy scouts, and yet never be a real boy scout. To be a real boy scout means the doing of a good turn every day with the proper motive and ff this be done, the boy has a right to be classed with the great scouts that have been of such service to their country. To accomplish this a scout should observe the scout law. Every boy ought to commit to memory the following ab- breviated form of the scout law. The Twelve Points of the Scout Law L A scout is trust?rthf. ?. A scout is loyal 3. A scout is helpful. 4. A scout is friendly. g ?. A scout is courteous. 6. A scout is kind.-- 7. A scout is obedient..- 8. A scout is cheertiff. 9- A scout is thrifty. xo. A scout is brave. xL A scout is dean. x?. A scout is reverent. The Boy Scout Organization* To do good scouting a boy must understand the organization of which he is a part. The Boy Scouts oi America is promoted and governed by a group of men called the National Council. This National Council is made up of leading men of the couqtry and it is their desire that every American boy .?hall have the opportunity of becoming a good scout. The National Council holds one meeting annually at which it elects the ofiScers and the members of the Executive Board. It copyrights badges and other scout designs, arranges for their manufacture and distribution, selects designs for uniforms and scout equipment, issues scout commissioners' and scout masters' certificates, and grants charters for local councilS. 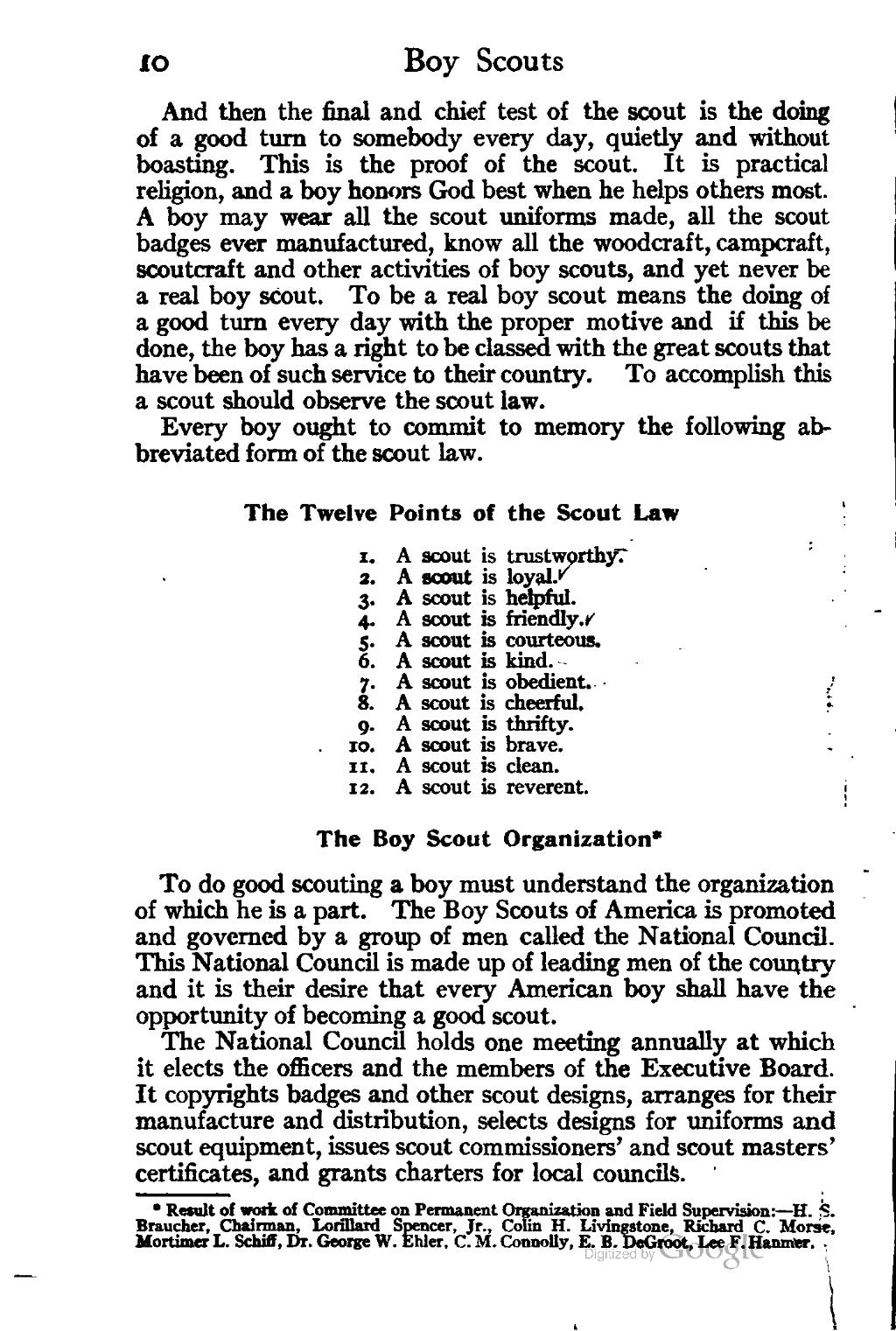