From thewoodcraft.org
Revision as of 00:11, 3 December 2016 by Tuwanakha (talk | contribs) (→‎Nebylo zkontrolováno: Založena nová stránka s textem „Campfire Stories of Indian Qiaracter 515 the wretch convicted of treason was executed under cir- cumstances of cruelty which would have been too much for…“)
(diff) ← Older revision | Latest revision (diff) | Newer revision → (diff)
Jump to navigation Jump to search
Tato stránka nebyla zkontrolována

Campfire Stories of Indian Qiaracter 515 the wretch convicted of treason was executed under cir- cumstances of cruelty which would have been too much for the nerves of the fiercest of the Apaches or Sioux. In- stances in support of what I here assert crop up aU over the pages of history; the trouble is, not to discover them, but to keep them from blinding the memory to matters more pleasant to remember. Certainly, the American aborigine is not indebted to his pale-faced brother, no matter of what nation or race he may be, for lessons in tenderness and humanity. After reviewing the methods by which the gentle, friendly natives were turned into tigers, Bourke gives this final example: "And then there have been 'Pinole Treaties,' in which the Apaches have been invited to sit down and eat repasts seasoned with the exhilarating strychnine. So that, take it for all in all, the honors have been easy so far as treachery, brutality, cruelty and lust have been concerned. The one great difference has been that the Apache could not read or write and hand down to posterity the story of his wrongs, as he, and he alone, knew them." — ("On the Border with Crook," John G. Bourke, pp. 114-15-16-17-18.) THE WIPING OUT OF NANNI-CHADDI (December 27th, 1872.) (From the account by Captain J. G. Bourke, in his book "On the Border with Crook" 1892. By permission of Messrs Charles Scribner's Sons.) For the same old reason, as always before, the Apaches of Arizona were fighting the whites, but doing it successfully. The Government at length sent against them fresh 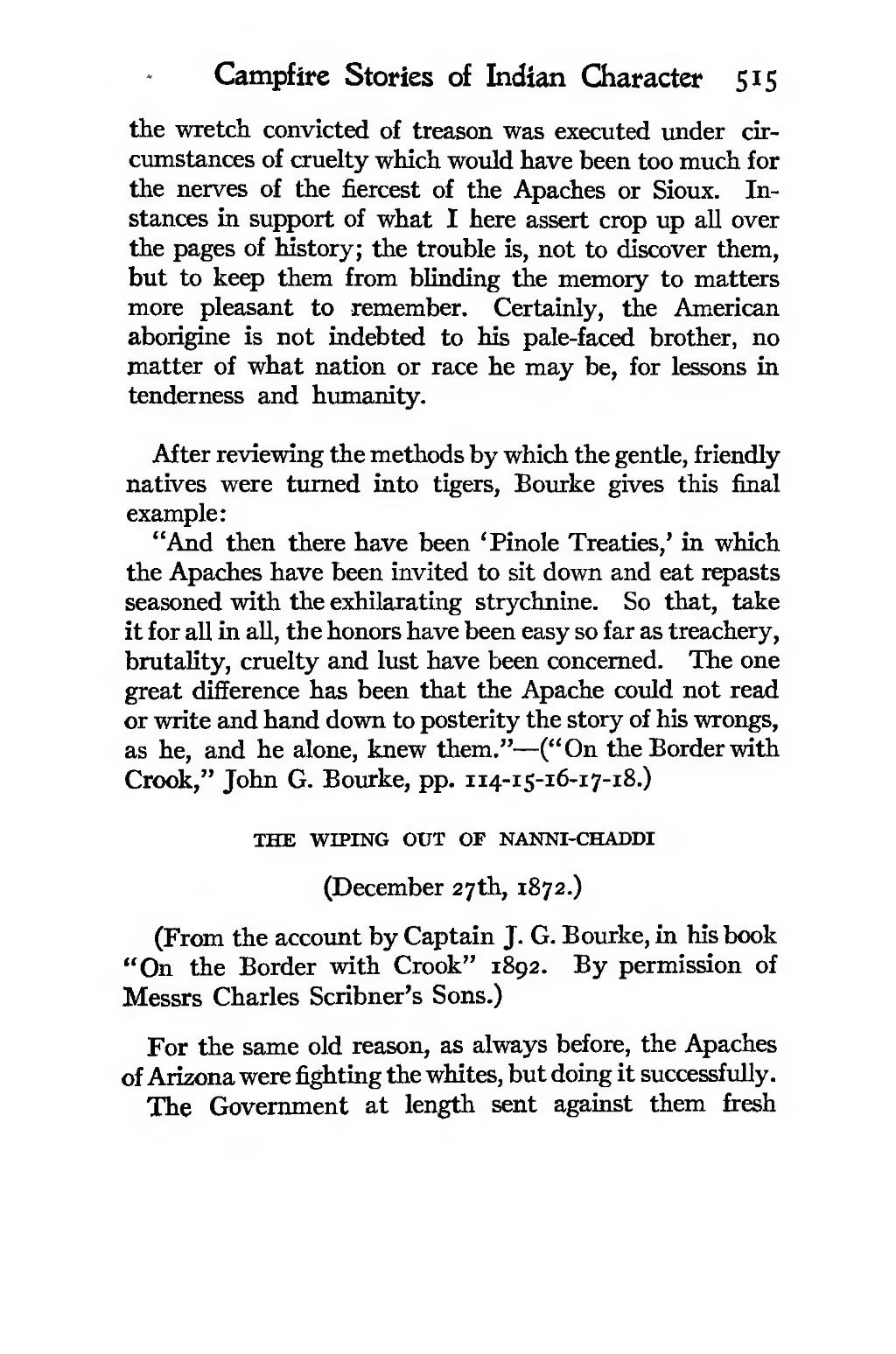