From thewoodcraft.org
Revision as of 17:17, 26 November 2016 by Keny (talk | contribs) (→‎Nebylo zkontrolováno: Založena nová stránka s textem „38o The Book of Woodcraft in snow drifts that were yellow with tall dead grass sticking through. This was promising, so I went thither, and on the edge…“)
(diff) ← Older revision | Latest revision (diff) | Newer revision → (diff)
Jump to navigation Jump to search
Tato stránka nebyla zkontrolována

38o The Book of Woodcraft in snow drifts that were yellow with tall dead grass sticking through. This was promising, so I went thither, and on the edge of the drift found a jack-rabbit form or den, with fresh tracks leading out and away at full speed. There were no tracks leading in, so he must have gone in there before the last snow came, and that was the night before. When a jack runs without fear of any enemy at hand, he goes much like a fox or an antelope, leaving a trail, as in No. 5. But when an enemy is close at hand he runs with long, low hops, from six to seven in succession, then gives an upright leap to take an observation, leaving a trail thus. (Illustration 7.) A silly young jack will lose time by taking one in three for observation, but a clever old fellow is content with one in ten. Here was the trail of this jack straight away, but taking about one observation in twelve hops. He had made a fence a quarter-mile off, and there had sat for some time observing, had then taken alarm and run toward a farmyard, a quarter-mile farther, taking occasional observa- tions. A dog was lying on a doorstep by the road, and past this dog he had run, doing twenty-foot leaps. Two hundred yards down this road he had turned abruptly, as though a human still in sight had scared him. I now began to think the jack was near at hand, although so far I had not seen him. The trail led through several barbed- wire fences and some hedges, then made for another barn- yard half a mile off. I was now satisfied that he was only a little ahead of me, therefore I ceased watching the track so closely, watching rather the open plain ahead; and far on, under a barbed-wire fence, sitting up watching me, I soon saw my jack. He ran at once, and the line of his hops, was so — (Illustration 8) — the high ones being for observation. No. 8. 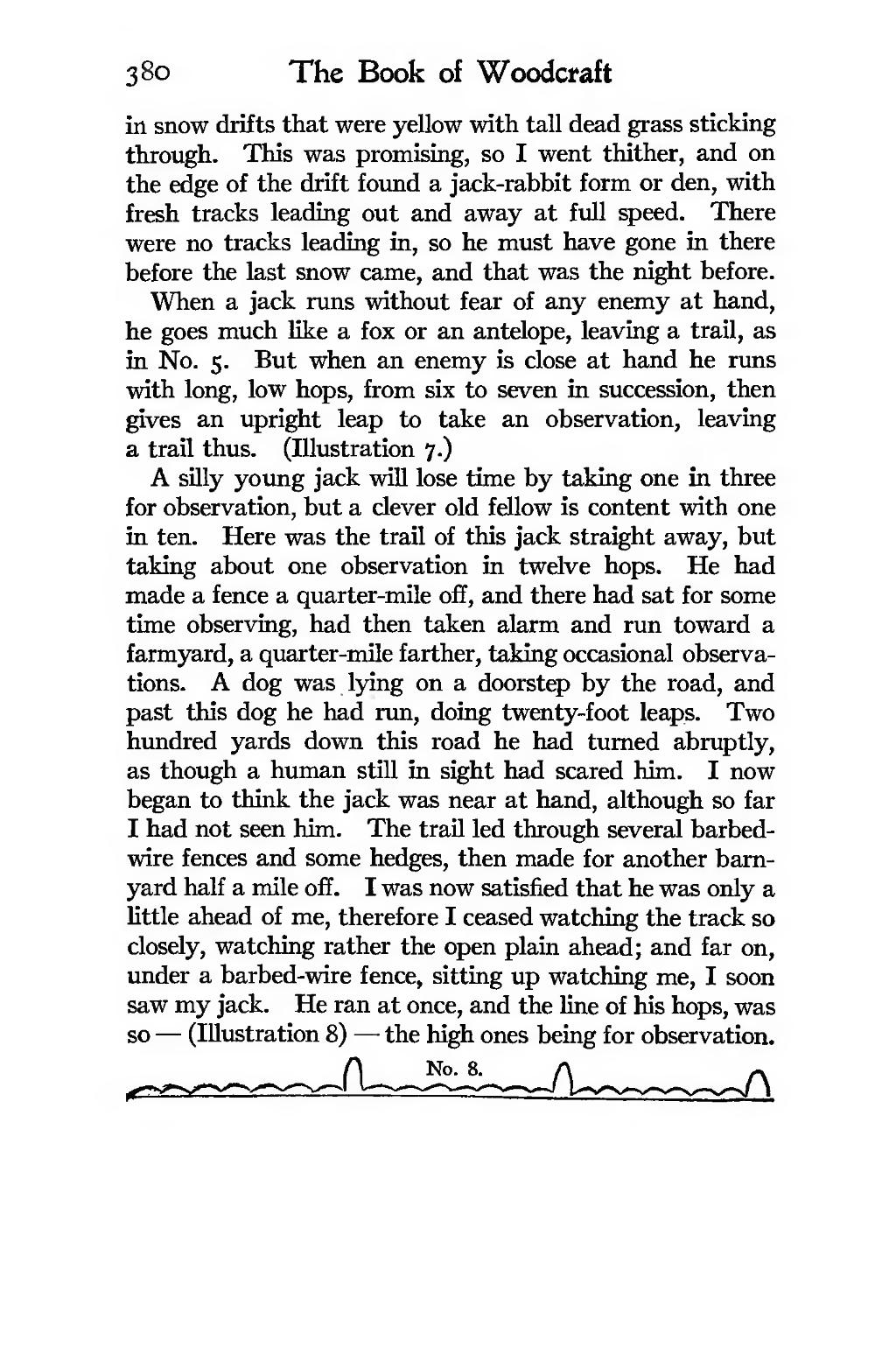