From thewoodcraft.org
Revision as of 20:12, 25 August 2015 by Keny (talk | contribs) (→‎Nebylo zkontrolováno: Založena nová stránka s textem „The Spartans of the West 15 everything the Cheyennes have ever done to the race of the assassins. (See "Century of Dishonor," pp. 341-358.) Still worse…“)
(diff) ← Older revision | Latest revision (diff) | Newer revision → (diff)
Jump to navigation Jump to search
Tato stránka nebyla zkontrolována

The Spartans of the West 15 everything the Cheyennes have ever done to the race of the assassins. (See "Century of Dishonor," pp. 341-358.) Still worse was the Baker massacre of Blackfeet, on January 23, 1870. A border ruffian, a white man named Clark, had assaulted a young Indian, beating him severely, and the Indian, in retaliation, had killed Clark and gone off into Canada. Without troubhng to find the guilty party, or even the band he belonged to, Brevet Col. E. M. Baker, major Second Cavalry, stationed at Fort Shaw, marched out, under orders from Gen. Philip H. Sheridan, to the nearest Indian village, on Marias River; as it happened, they were peace- able, friendly Indians, under Bear's Head. Without warning, the soldiers silently surrounded the sleeping village. But the story is better told by Schultz, who was on the spot later, and heard it all from those who saw: "In a low tone Colonel Baker spoke a few words to his men, telling them to keep cool, aim to kill, to spare none of the enemy; and then he gave the command to fire. A terrible scene ensued. On the day previous, many of the men of the camp had gone out toward the Sweetgrass Hills on a grand buffalo hunt; so, save for Chief Bear's Head and a few old men, none were there to return the soldiers' fire. Their first volley was aimed low down into the lodges, and many of the sleeping people were killed or wounded in their beds. The rest rushed out, men, children, women, many of the latter with babes in their arms, only to be shot down at the doorways of their lodges. Bear's Head, frantically waving a paper which bore testimony to his good character and friendliness to the white men, ran toward the command on the bluff, shouting to them to cease firing, entreating them to save the women and children; down he also went with several bullet holes in his body. Of the more than four hundred souls in camp at the time, very few escaped. And when it was all over, when the last wounded woman and child had been put out of misery, the soldiers piled the corpses 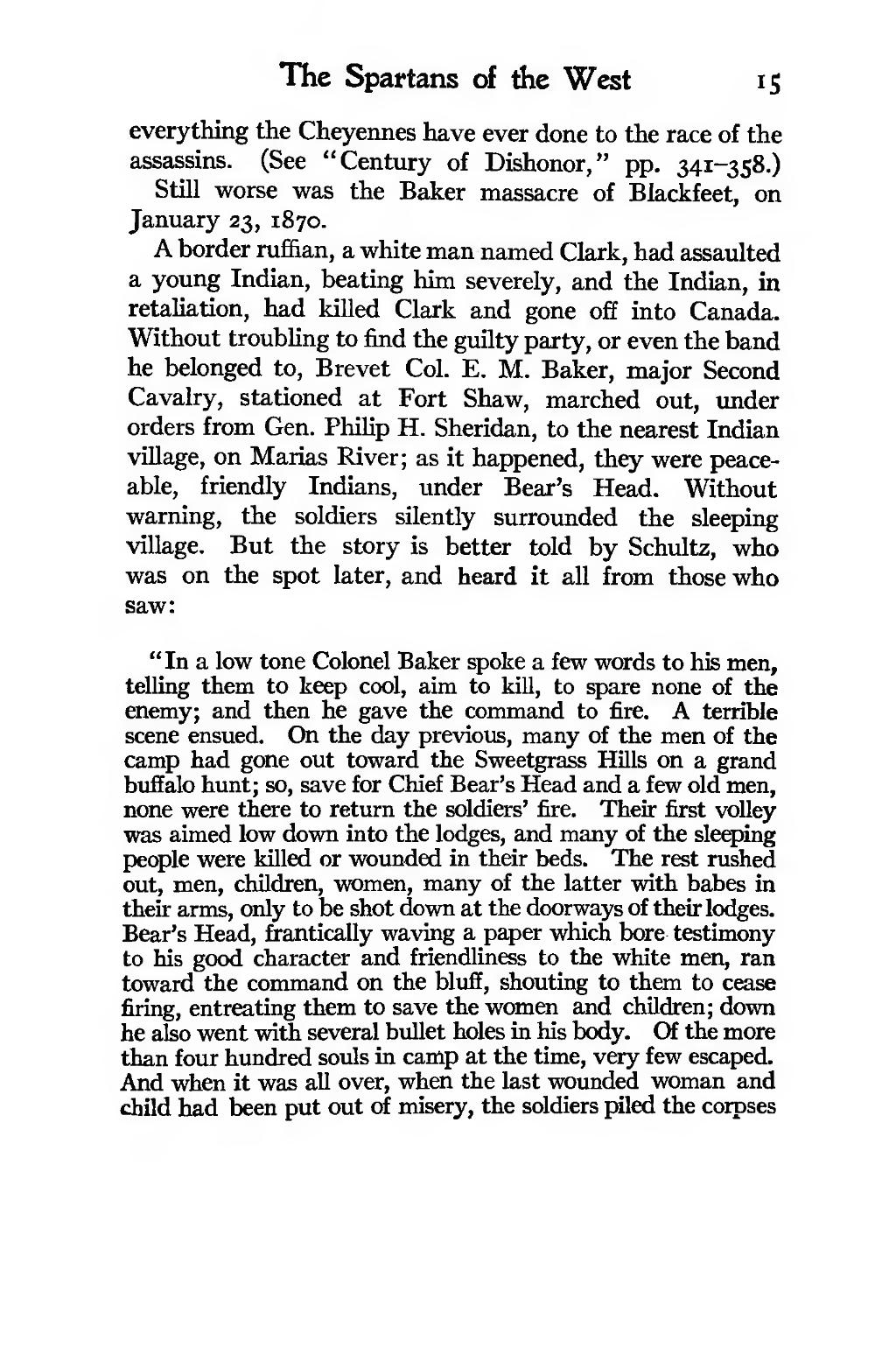