From thewoodcraft.org
Revision as of 23:10, 17 October 2016 by Keny (talk | contribs) (→‎Nebylo zkontrolováno: Založena nová stránka s textem „The Spartans of the West 33 jugal affection, that is met in more enlightened communities. I have found them moral and religious; and I am bound to give…“)
(diff) ← Older revision | Latest revision (diff) | Newer revision → (diff)
Jump to navigation Jump to search
Tato stránka nebyla zkontrolována

The Spartans of the West 33 jugal affection, that is met in more enlightened communities. I have found them moral and religious; and I am bound to give them credit for their zeal, which is often exhibited in their modes of worship, however insufficient they may seem to us, or may be in the estimation of the Great Spirit." (Vol. 11., p. 242.) While Hunter, after living with the Kansas Indians for nineteen years, says: "They are very assiduous and attentive to the wants and comforts, particularly, of the aged; and kind to all who require their assistance. And an Indian who failed in these respects, though he otherwise merited esteem, would be neglected and despised. To the credit of their morals, few such are to be found, except where debauched by the vices of the white people." (Hunter's "Captivity," 1798-1816; p. 251.) Among the maxims laid down by the venerable Chief of the Kansas, was: "Obey and venerate the old people, particularly your par- ents." ("Teachings of Tshut-che-nau, Chief of the Kansas;" Hunter; p. 21.) Father J. F. Lafitau, the Jesuit missionary, was far from being predisposed in favor of savage ways or views, yet says of the Eastern Indians: "Toward each other, they behave with a natural politeness and attention, entertaining a high respect for the aged," (Moeurs des Sauv. Am., 1724.) "The Indians always took care of their aged and helpless. It was a rare exception when they did not." (Francis La Flesche, Conversation, April 27, 1912.) There have been cases of Indians abandoning their very aged to die, but it was always done by request of the vie- 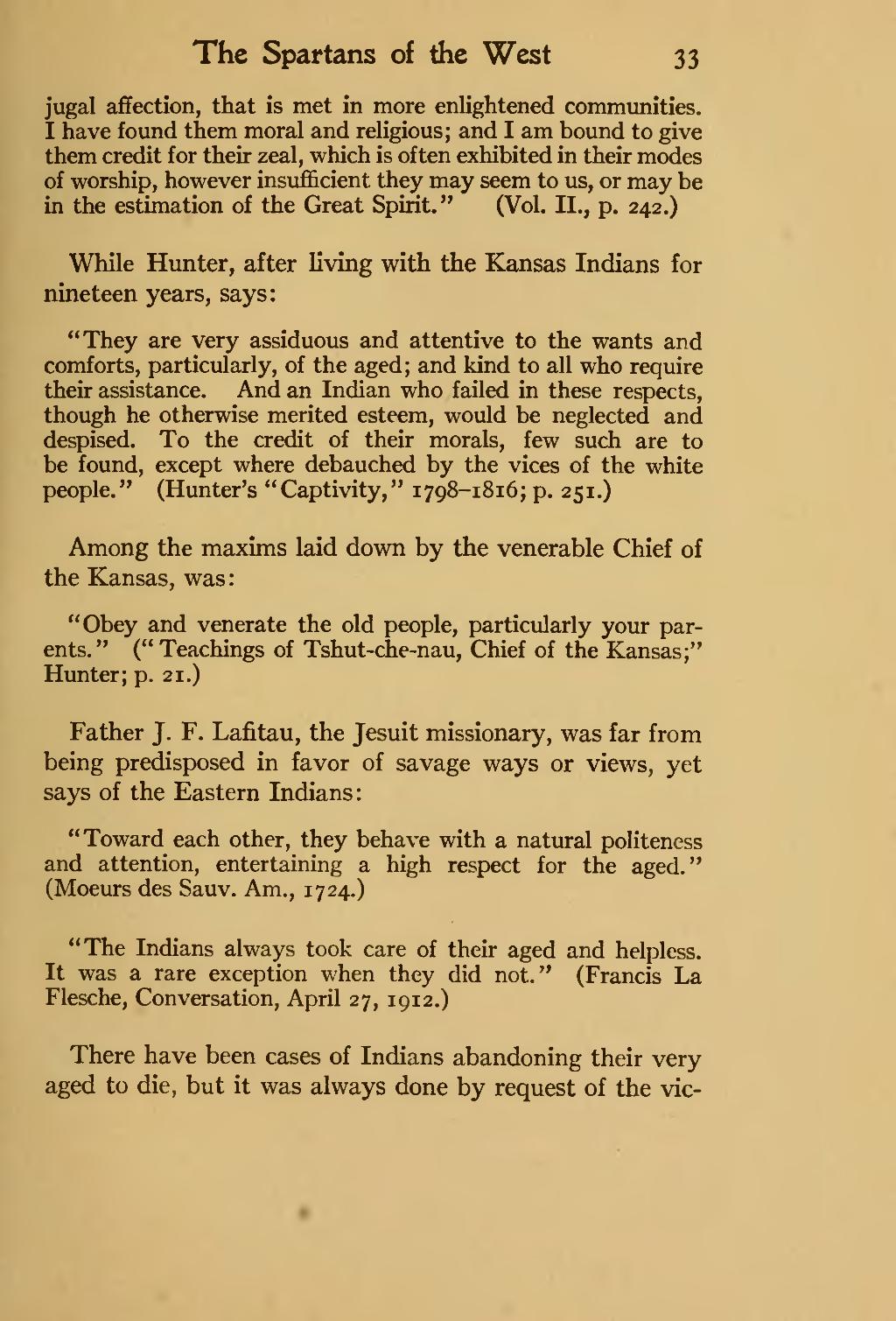