There never was a time when the value of the Woodcraft training was more clearly demonstrated than now. Men at the front testify to its value. We lay great emphass on “The Thinking Hand.” “The Seeing Eye.” on initiative and team-play, and just now we believe that the best approach to these is through America is called on the use of the emotions of the moment to fight for its existence and every boy and girl man and woman must respond.

A committee consisting of Dr. W. G. W. Anthony, Miss Anne S. Grumman and Mr. Fred. R. Hoisington have gone over the matter carefully with a number of our Guides, and as a result the following War Time Honors have heen adopted.

Woodcraft is the science of living and emphasizes particularly the use of instincts. We are now living in a time of war, which brings prominently to a point the instinct of loyalty to one’s group: that is Patriotism so far as it relates to one's country.

Woodcraft Boys and Girls can render service to the country. The Council of Guidance believes such service should be recognized, standardized and energized by presenting Honors for exploits and accomplishments inspired by Patriotism.

(As coups are given in recognition of the attainment of a certain standard a coup or grand coup will be awarded only once for any exploit. No repetition is allowed.)

All the articles mentioned below must be accepted by the Red Cross or other relief agency of like standing before Coup is granted.

2, Act as officer of a successful Red Cross Auxiliary for one year. Coup.

4. Teach ten persons to knit for War Rehef purposes, coup; teach twenty-five, grand coup. (Person is considered to have been taught when she hax completed one article and had it accepted.)

6. Knit a sweater and wristlets or knit a helmet and socks. (Takes about three hanks of wool.) Coup. For a grand coup: Knit a set — sweater, scarf, helmet, wristlets, socks.

7. Knit a scarf or wristlets. Coup for Little Lodge only.

8. Make dresses or other garments for children in the war zone. (French, Belgian, etc.) Time spent on this coup to be at least twenty hours. Coup.

9. Coup or grand coup may be claimed for any relief work of like character to above done for any authorized agency. All such claims must be passed on by the Coup Committee of the Council of Guidance at National Headquarters,

CONSERVATION OF FOOD AND MATERIALS.

10. Coup or grand coup may be claimed for establishing and maintaining an additional garden since the war began for the purpose of increasing the food supply. All such claims must be passed on by the Coup Committee of the Council of Guidance at National Headquarters.

11, Distribute Food Conservation cards, or perform other like service for Conservation Committee; not less than twenty hours time to be given.

13. Can and preserve three dozen jars of food. This must be in addition to the normal supply for household purposes.

14. Prepare five appetizing well-balanced meals without meat, wheat or cane sugar; write a paper explaining the substitutes used and the value of them. Coup or grand coup, according to merit.

15. Collect 500 pounds of paper, sell and donate the sum realized to some war relief work. Coup.

16. Collect 50 pounds of rubber, sell and donate the sum realized to some war relief work. Coup.

17. Collect 20 pounds of tinfoil, sell and donate the sum realized to some war relief work. Coup.

19. Distribute Liberty Loan posters or circulars; time consumed to be not less than twenty hours. Coup.

22. Buy with money earned or saved a Liberty Bond. Coup.

23. Do without candy, or stay away from movies and purchase a War Thrift certificate ($5) with the money so saved. Coup.

25. Mail 100 magazines of recent date to soldiers in camp, coup; mail 250, grand coup. (Magazines may be taken to the public library, where they will be mailed free.)

27. Send 5 food packets or comfort kits to soldiers or sailors in service.

(Instructions for knitting the articles mentioned may be obtained from Red Cross Chapters or from the Headquarters of the Woodcraft League.)

“Among the rations was a delicious ham which took my fancy, for I had not had any real food since the beginning of the battle. The dugout was so small that eating in it was out of the question, so the haw was placed on a sand bag on the side of the trench. Taking a knife and fork from my knapsack, I was about to cut a nice fat slice, but at the moment I put the fork into the ham a messenger came along, and with due politeness I stepped back against the side of the trench, which was very narrow, in order to give him room. Scarcely had he passed than with a dull, sickening screech a piece of shell casing came flying down and struck the sand bag exactly where my left wrist would have been had I continued the ham cutting operation. Besides taking my hand off, it would have undoubtedly have destroyed my wrist watch, and as this had been given to me by my wife, it would have been most annoying, while to have lost my hand while carving a ham would not have been very glorious. I doubt if I would ever have had the satisfaction of claiming to have been “wounded in action”. For a souvenir I dug the piece of iron out of the sand bag, it having gone completely through one and partly through the second, and then I cut the ham, which proved to be quite as good as it looked.” 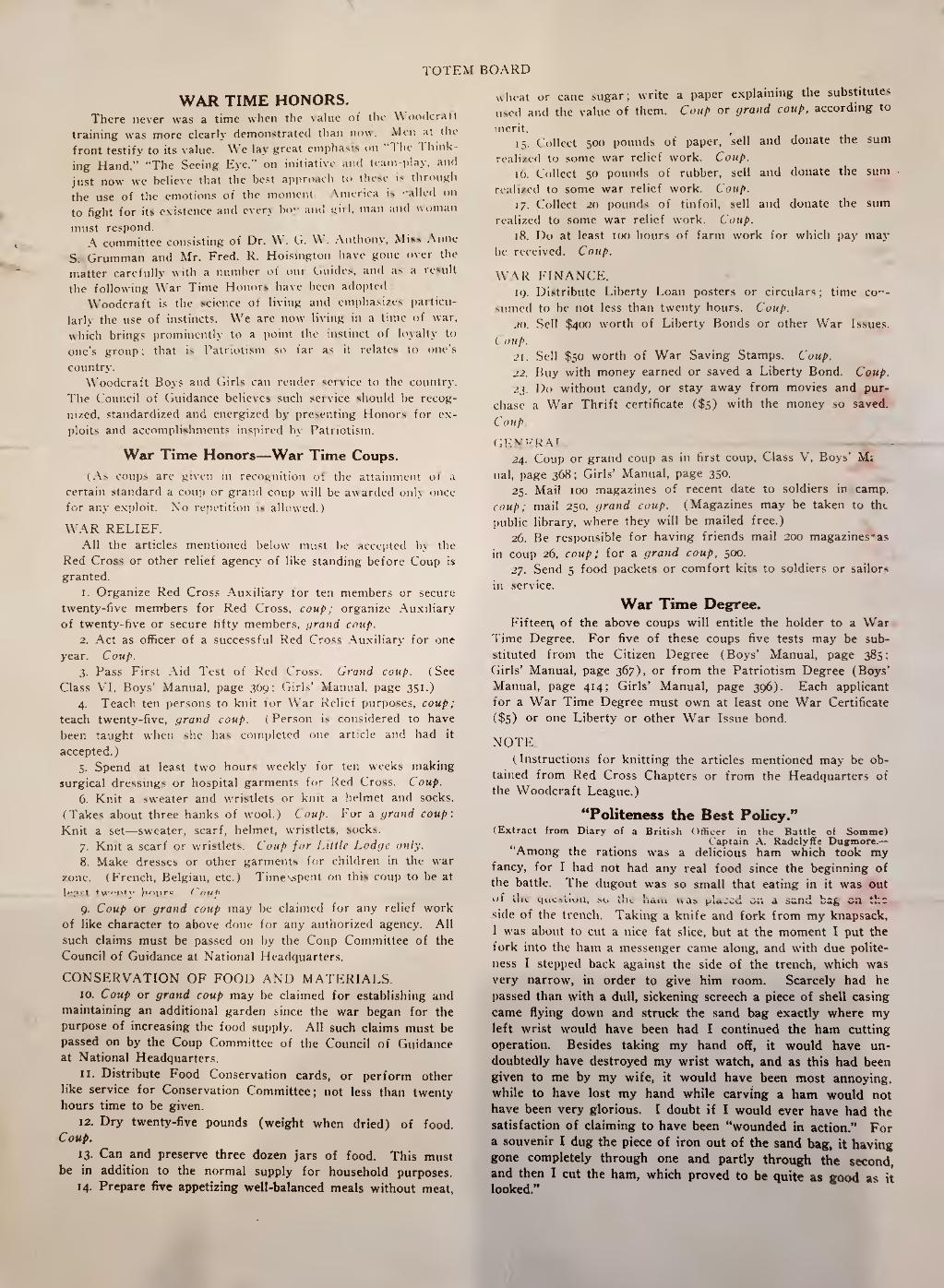