We are to consider initiations in this number, and we find the initiation of great and good importance provided it is something which cannot do harm or lead to mischief, and which tends to make one guard against some weakness of character.

We had in one camp a boy who was very sloppy in his ways. He was just a little behind time always and his work was never quite finished. His speech was mumbling and uncertain. There was a lack of precision in all he did. He wished to join as a Wayseeker and now came the initiation test.

As usual we selected on that which bore on his besetting sin. We gave him the “business test” or “exact obedience”. He was told to stand up at attention and receive his instructions.

“You are to come back here at exactly to o'clock, bring in your left hand two willow rods exactly 31 inches long each, as thick as your little finger, straight, white, peeled, one like the other. That is your initiation. If you are a minute early or a minute late you have failed. If the sticks are different, or longer or shorter, you have failed”.

At half a minute after to he was there with the sticks. They were straight, white, peeled, willows, as thick as his little finger, one like the other, but they were 31½ inches long.

“That's enough”, was the answer.

“Because of some tittle-tattle among the fellows you would change your official instructions from headquarters, and then you came half a minute too late In other words, you have failed. Now go and sit in the shadow“. Which meant in the shadow of failure.

For one day he was excluded from the boats and the games. Then we gave him another chance – again he failed and had to sit in the shadow. But the third time he succeeded in passing triumphantly and had a much larger respect for the initiations and the degree of Wayseeker when he was entered.

In one camp when there were special reasons for a severe initiation we gave the business test in double degree, i.e. four rods, etc. If you think it is easy go and try it. Of course one initiation is all that any one member is expected to pass.

Changes in the Council of Guidance.

Miss Jean W. Miller, one of the first members of the Council of Guidance and active not only in the work of the Woodcraft Girls, but in the Potato Club work as well, has resigned in order to take up Y.M.C.A. Canteen Work with the American Expeditionery Force in France Judge Wm. H. Wadhams, who because of his duties was unable to continue, has also resigned, as has John L. Alexander of Chicago. The League will not lose the services of these members, as all have accepted places on the Advisory Council of the League.

Ben S. Nash was elected to fill the place of Judge Wadhams Mr. Nash is an active Guide and has been Chairman of the Boys’ Work Committee for several months. His election to the Council of Guidance will greatly strengthen the League, and particularly the Boys’ Work, which will be under his charge from now on, Miss Miller’s successor has not yet been elected, it being the plan of the Council of Guidance to find some one who will at the same time act as Chairman of the Girls’ Work Committee.

Doctor W. George W. Anthony has been elected to take the place of Mr. John L. Alexander. Doctor Anthony is Vicar of Saint Augustine Chapel, where the Woodcraft Work has been conducted for the last two years, there being a Woodcraft Tribe for Boys, for Girls and a Little Lodge. Doctor Anthony will be a strength to the League as Chairman of the Committee on Honors.

It was a great national service that the Woodcraft League rendered when the Woodcraft Potato Clubs were organized early last spring and thus started the movement for the use of back yards and sunny lots. As a result, thousands of acres of potatoes were planted and the food supply greatly increased. There were 2,650 members in 26 different states, not to mention the work done in canning, etc.

Already plans are under way for the coming summer.

The report of the Committee on Prizes follows:

For growing the largest amount of potatoes from 24 hills:

For growing the largest potato in 24 hills:

A handsome silk flag valued at $75 will be forwarded to the list prize winners in each case. Second prize is a solid silver medal and the third prize a bronze medal (all especially designed).

William Pickers of Montague, California, grew 68 pounds of potatoes in 24 hills and had one potato weighing 15½ ozs., but his report was not received until after the prizes were awarded.

The following leaders of groups are given medals for particularly fine work in encouraging young people in agricultural work:

As a result of the work done by the Woodcraft Potato Clubs in raising potatoes the interests of the public was centered on potato growing and the potato crop greatly increased.

We wish to congratulate every member of the Woodcraft Potato Clubs for this practical piece of “Potatriotism”, and trust you are already making plans for the coming season, which should witness the greatest growth in potatoes and other vegetables that our country has even seen. 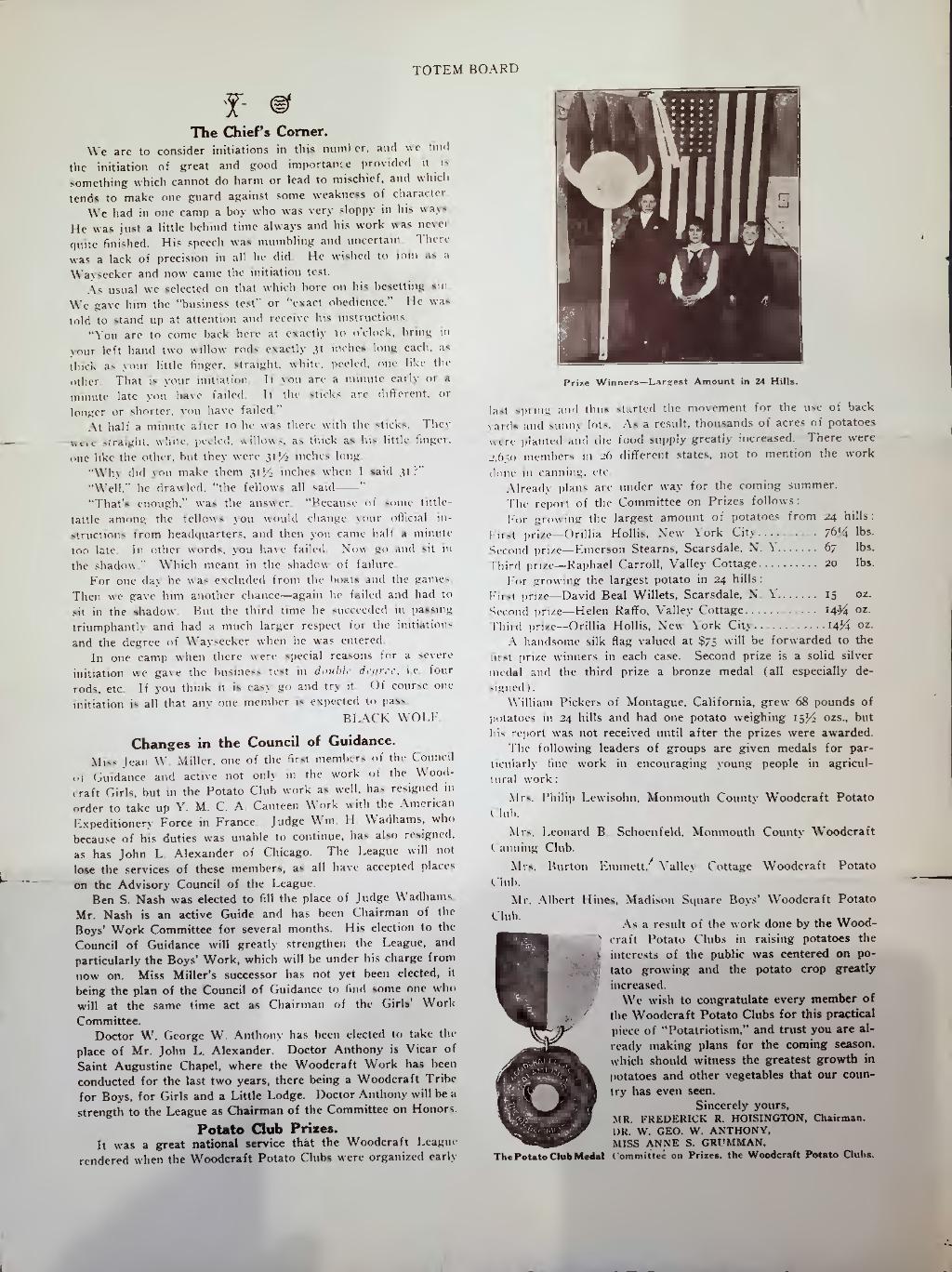