“We want some stunts that we can get up in a hurry”, writes one Woodcraft Guide.

“Can you give us some good initiations?” writes another.

I was tempted to tell the first to go to the Manual and he would find abundance of the thing he needed; but experience shows that it is good to tell a thing in different ways.

Here is stunt No. 1, also useful in some of the tests: Make a fuzz stick, or fire lighter. like that on page 223 of the Boys’ Manual, or page 215 of the Girls’, only better. It needs good soft wood, a sharp knife and a steady hand. It is hardest to do at the first few cuts: it becomes easier afterward. It is perfect if finished with every one of the twenty or thirty slivers still strongly attached to the stick — not one fallen to the ground. Unless you have tried to make a fire under difficult conditions, such as snow or rain, you cannot realize the value of the fuzz stick.

For a simple outdoor test, send off a scout to find two tree leaves or two blades of grass exactly alike. It sounds easy when one remembers the millions of chances. yet it is very certain that he will fail There will surely be some mark or line to distinguish one from the other.

Another stunt, and one that I almost fear to tell of, is the barnyard concert. Get three or four different sized empty tins, say cocoa, condensed milk, peas and tomatoes; some cord about as thick as a goose quill and some powdered rosin.

In the middle of the bottom of each tin make a hole just big enough to take the cord. Tie a knot on the inside of it and leave about three feet of the loose end hanging; rub some rosin on the cord, then hold the tin in one hand and draw the cord slowly or with jerks through the other hand or finger and thumb. The result is a succession of chicken-like squawks. Each tin has its own player. They are named “Cochine Rooster”, “Old Hen”, “Bantam” and “Spring Chicken”.

“By modulating the squawks with long or short jerks, the barnyard calls may be closely imitated and a wonderful squawk and cackle concert is the result. Whether agree-able or not is a matter of opinion. I only hope that parents will not have hard feelings toward me for suggesting it.

On page 11 of both the Girls’ and Boys’ Manuals are given five initiation tests, but the number is to be increased.

All we require of initiations is that they are harmless and calculated to develop strength of character. Of course, they are always given under guidance of some wise grown person.

No. 2, “Keep Goodnatured”, is usually called “the goat”, because frequently it is worked with a big wooden medal with a goat on it. This is hung around the applicant’s neck and must be worn for the approved period. If anyone manages to make him or her lose their temper, they get the goat. One fellow last summer tried and failed eighteen times before he got through, and there is no question that he was the better for the discipline.

(Under this department questions will be answered from time to time.)

Question: “What is the best way to get new members for a tribe?”

This is such an important question that we have asked a Head Guide who has been particularly successful in his Woodcraft work to answer the question.

“We just don’t try.” We are more interested in doing our tribal work well, and know that if it is done well it is reflected in the Tribe and thus makes other boys want to sit in our council.

“We have been very slow in increasing our membership. When a boy expresses a desire to join the —-— he may come as a visitor at one of the councils. He is then requested to stay away until such time as we have discussed the advisability of his becoming a member of the Tribe. If it is found that he will not make a good member, he is not invited again. But if to all appearances he will be of help to the Tribe and the Tribe can be of help to him he is invited to study the laws and finally take his initiation test and become a member.

“We discourage the boys from promiscuously seeking new members, and this has resulted in a greater desire on the part of non-members to join. The boys themselves have such high regard for the Council Ring that they are just as desirous as the Guide to have only real boys as members.”

This question was answered by a Head Guide who started with three boys in his own home about six months ago. He now has a dozen boys, wiht a long waiting list. We believe emphatically that his policy of putting emphasis on what the Tribe does rather than on getting new members is bound, in the long run, to work for the best results, so far as membership is concerned.

The War and the Child.

Dr. Anna H. Shaw, Chairman Woman’s Committee. Council of National Defense, has written calling attention to the fact that the Federal Child Labor Bill will release large numbers of children from many employments in which they were formerly engaged, and urging that every possible step be taken to keep these children in school. We are glad to pass this message on to our Guides and members and at the same time wish to again urge the importance of seeing to it that the work with the children is taken care of properly this coming winter. We must. of course, see that our soldiers are protected. We must not, however, allow our enthusiasm for some of the more recent needs dim our responsibility to the work already undertaken. In some cases we have found Woodcraft Tribes being temporarily discontinued because of the stress of the work with adults. Woodcraft work, when properly conducted, is character-building work of the highest order. The increasing needs of work with older people should mean the calling in of extra volunteers rather than the dropping of the children’s work.

The Tale of What a Woodcraft Tribe Did During the Month of September.

Before the boys went on their vacations each was furnished with a diary by the Guide, and it was planned that these diaries would be read as “report of scouts” at the opening of the fall season. Each Brave was to report as ..text continues 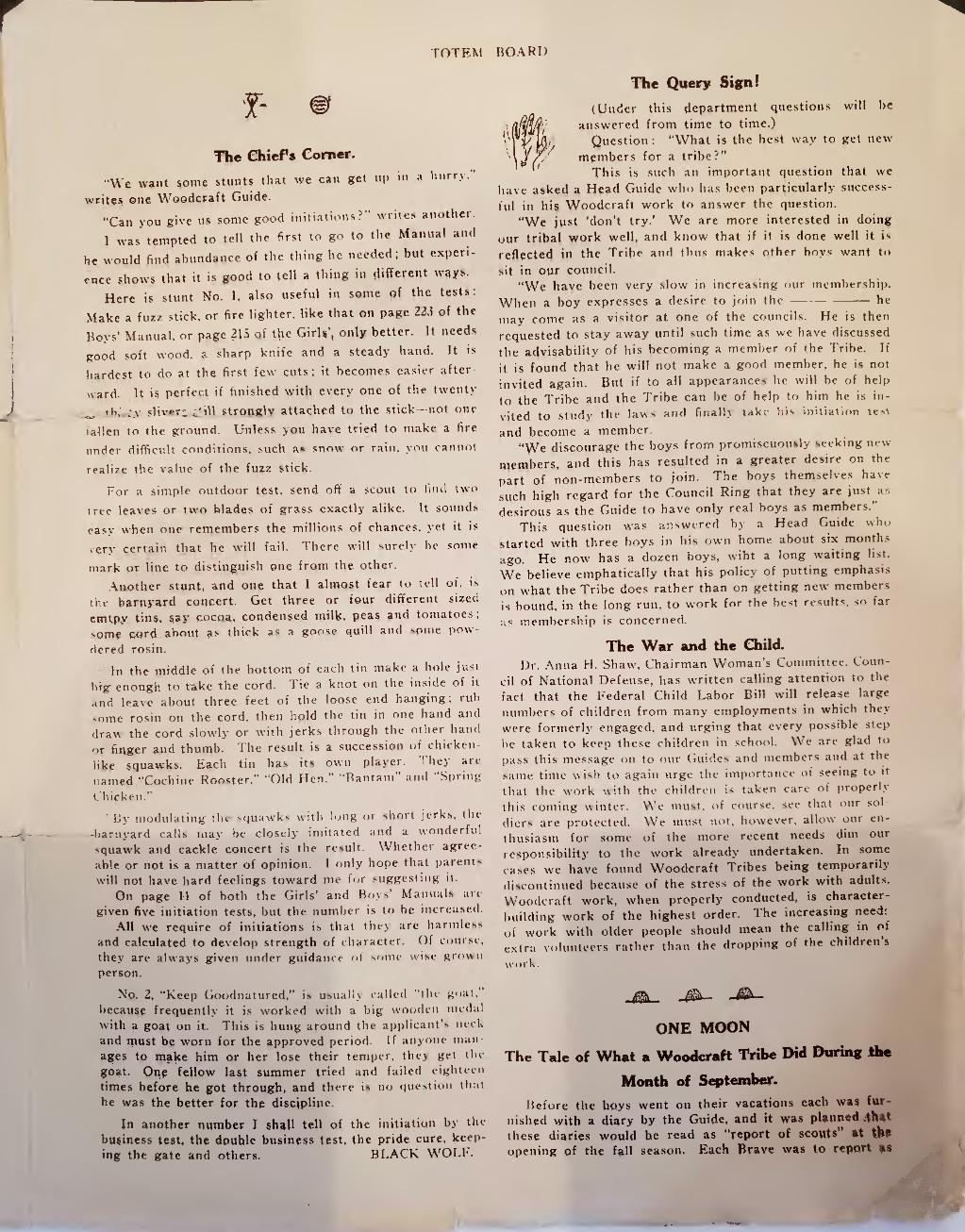