An Opportunity and an Obligation.

There are exciting days. Our streets are filled with the men who march away to battle and with the women who work for the sick and wounded. We face the greatest crisis in our nation’s history, and as individuals are pulled this way and that by our sense of duty. Some have gone to the front or have given themselves entirely in other ways. Others have been called upon to stay at hame and “keep the home fires burning”.

Let us do our duty wherever it may be, but let us remember, even as the sound of the drum and bugle sends the tingle through us, that into our hands have been committed the lives of the boys and girls. Shall we use the impulses and feelings of the moment to get results that perhaps could never be gotten at any other time, or shall we allow the emotions to pass off unused?

Take advantage of the times to teach real patriotism of the thoughtful sort, to stress the importance of thrift, unselfishness, courage, obedience. The twelve laws of Woodcraft have peculiar meaning to-day. Read them again in the light of the moment.

Let the boys and girls have definite tasks to do for the expression of their patriotism, but remember to let them laugh and play.

There never was a time when the Woodcraft Program would produce better results as a character builder than now. Hear what Ernest Thompson Seton says in the Woodcraft Manual for boys:

“In the beginning, Woodcraft was the only science known to man, because he lived in the woods, and there had to master the things of his everyday life.

“Thus it gave him skill with his hands, speed with his feet, as well as knowledge of all wild nature. It taught him to swim and be brave, as well as obey his leader and be true to his clan. The first time he failed in any of these things might easily mean death. Those who survived were the ones who had learned by heart all the big lessons of Woodcraft. It was not only so then, but it has always been so, and is so to-day.

“All the great men who have made history were trained first in the school of Woodcraft. Nimrod, the mighty hunter, who built the city of Ninevah; Sardanapalus, the lion-killer, the monarch of Assyria, who by the force of his own arms overcame two lions that attacked him at one time; Brennus, the Gaul, who could shoe his own horse and who was able to master all Rome; Rollo, the sea king, who could steer his own ship in the wildest water, and landed in Normandy to establish order and lay down laws that are now accepted all over the world; William, the Conqueror, of England, the hunter whose bow was the strongest among all the archers of his day; Charlemagne, the great hunter, careful farmer, world master; William of Orange, hunter, fisherman, sportsman, horseman, arbiter of the destinies of all the British Empire; Washington hunter, woodsman, frontiersman, farmer and army scout, able to run, wrestle, command or obey; Abraham Lincoln, hunter, pioneer, woodsman, horseman, planter, farmer; U. S. Grant, back-woodsman, frontiersman, farmer boy, soldier, big brother to five little ones. These and the whole long list of names in the Hall of Fame, all bear testimony to the truth of this whether in wood or on farm, all their essential training was in mastering the daily obstacles of life; obstacles which called for handicraft and nature knowledge, strength, and dogged determination, qualities which ever doubled as they were used.

These moments when the world is being moved will pass away. Let us use them to build character which will be worthy of the times.

Good News for the Tribes.

A very unique and attractive membership ticket is being prepared by Headquarters for the members of the local tribes. It will consist of two celluloid covers, one ticket, and one memo tablet. The outside of the covers will be printed in blue and will contain the Twelve Secrets of Woodcraft as drawn by Ernest Thompson Seton. Inside will be found the twelve laws, the purpose of Woodcraft, etc. The ticket will be signed by the Chief and Executive Secretary, with spaces for the name of the local tribe, the name of member and the name of the local Head Guide. Sufficient tickets will be supplied to all chartered tribes upon reporting to Headquarters the number of members.

In the Query Section will be found this month a question regarding new members. We find that the methods as to receiving new members vary greatly. There has been prepared an application blank to be signed by the prospective member and endorsed by the parents. It will make sure that the candidate knows what he is doing, that the parents approve and that the tribe gets a real member rather than temporary enthusiasm. The blanks will be supplied by Headquarters at the rate of 25 for 20 cents.

A number of new coups appropriate for the war conditions will be contained in the next edition of the Totem Board. They will help to encourage Woodcrafters to do their share. Special War Degrees are also being considered. Suggestions along either line will be gladly received by the committee. 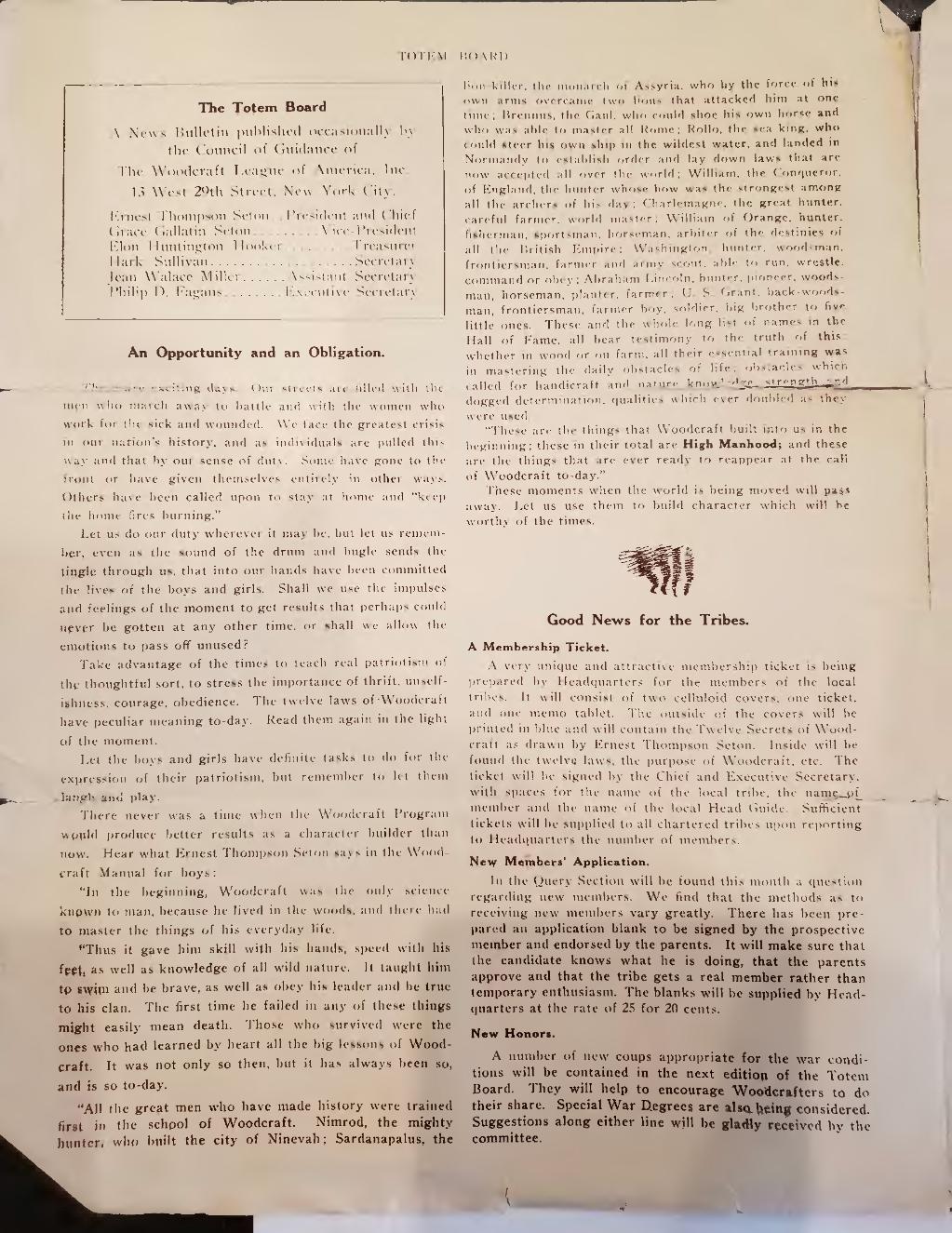