Continue from page 4 secured the planting of several thousand extra acres by farmers, and her Woodcraft Potato Club took over 60 acres for cultivation. Then a canning department was formed under Mrs. William Schoenfeld, which has put up no end of vegetables and fruit. The extent of the total operations in this one county may be judged by the size of the budget raised, $7,000, and by the fact that the Woodcraft League canning chef cleared $1,600, $800 of which was given to the local Red Cross and $800 divided between two local hospitals. Scarcely less notable was the work in Fairfield County, Conn., by the Farm Bureau working in co-operation with the Greenwich Branch. The Woodcraft League furnished seed potatoes for eleven (11) acres, under the able leadership of Mrs. Emerson Newell.

Altogether thirty-five States as well as Alaska were represented in the competition for prize flags and medals offered by the League for successful boy and girl potato raisers, the results of the contest not yet being known.

No less striking than the call for boy and girl patriots for potato raising was the warning sounded by Mr. Seton in the early Summer that child activities must not be stifled by the war. He called attention to the experiences in England and France, and appealed for the continuance of schools and every form of work for and with children and the prevention of all forms of exploitation of child life. The call has been taken up by many agencies and a favorable atmosphere for children’s work in war times has been created. Lord Northcliffe, the English war representative here, wrote Mr. Seton a letter warmly commending his appeal, and the League is cooperating with the Child Labor Bureau to aid in enforcing the new Child Labor Law which became operative September 1st, and is co-operating in many other such activities in the interests of the Nation.

Woodcraft girls have been enlisted in many agencies for “doing their bit”, and none more important than in signing and inducing others to sign the Hoover food pledge — saving as well as producing.

What Some Woodcrafters Are Doing

Much of the success of the Woodcraft Potato Club is due to the work of Jean Miller, who gave up several months of her time to the promotion of this important piece of war work.

Professor H. H. Horne spent the summer lecturing in a Training School for Y.M.C.A. War Secretaries at Blue Ridge, N. C. He is also Vice-President of the Leonia Loyal League.

Agnes Miller, the Chairman of the “Little Lodge” Committee, has enlisted as a Yeoman in the United States Navy and has been assigned to office and literary work.

Mrs. Seton has accepted the invitation of the National Women’s Auxiliary to take charge of the next Liberty Loan campaign for the District of Columbia, and to formulate campaign plans which may serve as suggestions for town and city campaigns throughout the Nation, and will spend several wecks in Washington on this work.

Philip D. Fagans is on the National Committee on Farm Camps of the Working Boys’ Reserve.

F. H. Schmidt, in charge of boys’ camps, has enlisted in the regular army. Scores of the guides and others connected with the organization are in some phase of war work. It is apparent, therefore, that Woodcraft is having its part in the stirring events of these stirring days.

Woodcraft and an Army Man.

As regards “What Woodcraft Has Done For Me”, would say that, to my mind, its principal value lies in the sense of security and confidence it gives in meeting the numerous unexpected obstacles which present themselves in the business in which I am now engaged. Have often had occasion to use little tricks known to all Woodcrafters, such as arranging the blankets alternately so that no matter which way one rolled at night he would be winding one blanket around him; the knowledge that soap rubbed on the inside sole of the sock before a hike helps one’s feet; and the knowledge of cooking I had acquired came in very handy this past Summer — I was unexpectedly called upon to cook for seventeen men for a week, and managed to satisfy them all. It has often disturbed me when I consider how helpless most of the men in the regiments are in these and similar things. Have often remarked that the only advantage we have over Boy Woodcrafters is physical strength.

When I was obliged to stand guard on lonely posts in the day time I used to take a great deal of pleasure — and at the same time I passed the time which would otherwise have hung heavily — in identifying the birds that flew about. Also since coming here to Van Cortlandt we have taken several hikes and I have derived a great deal of pleasure on these occasions from endeavoring to identify the trees as we went along.

Could tell numerous other ways in which Woodcraft has helped me. I often wish that the squads I have in charge had had a Woodcraft education. 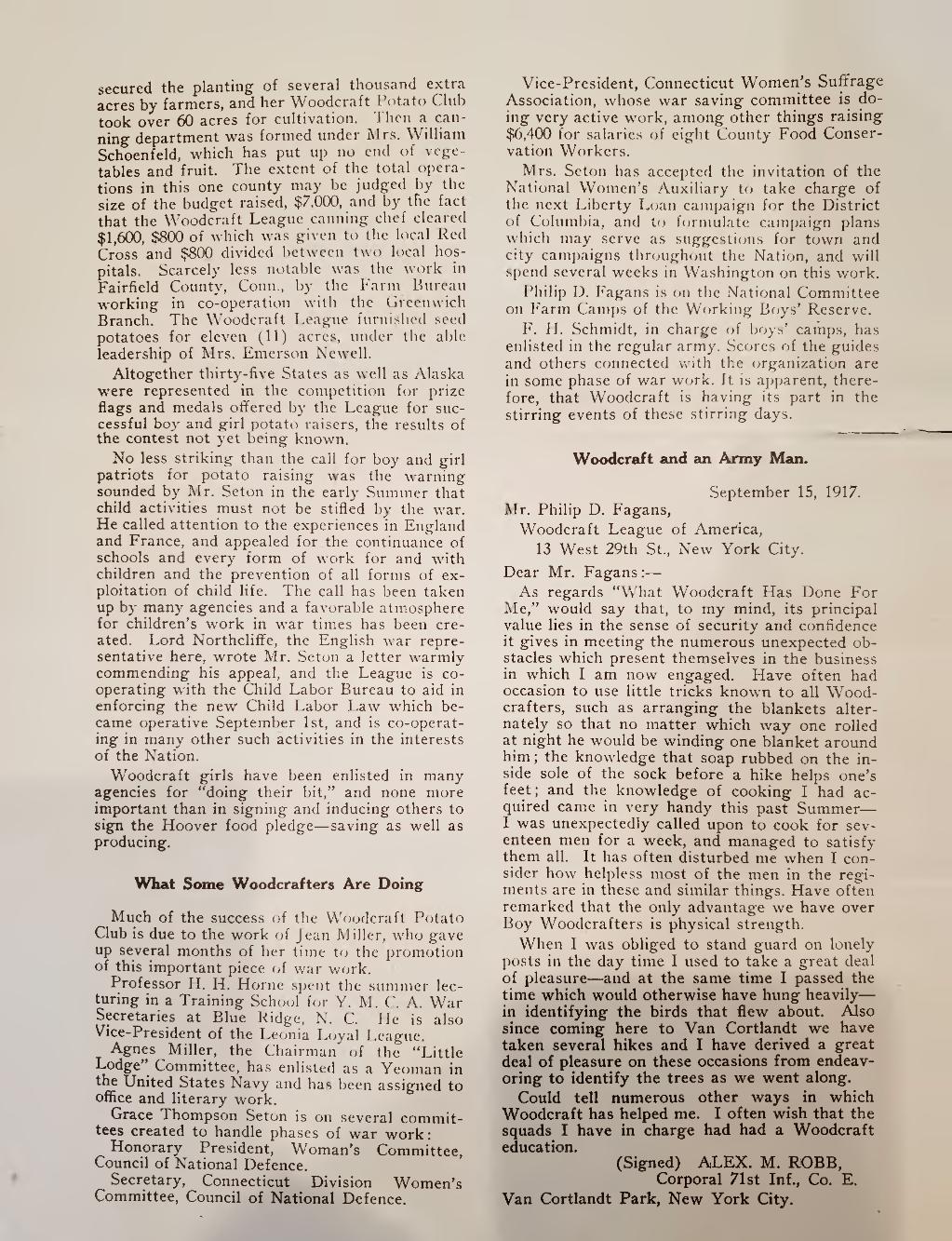