The Child Spirit of Woodcraft

number of boys who went wrong; that is, who made failures of their lives. Five hundred out of a thousand was what I learned on good authority. Judge Ben Lindsey was visiting me at one time and I asked his view. He said:

“What is your measure of success?” I replied:

“If a man has got an education, supported himself, raised and educated such family as came his way, kept out of jail, and voted honestly at the elections, he has made a success of life.”

“If”, said Lindsey, “you set your standard as high as that, then seven hundred and fifty out of a thousand fail”.

“I fear you are a pessimist because you see only the seamy side of life in your court work”, was my rejoinder.

Think of it, half our young people are doomed to failure as really good citizens! Why? Are they born wrong? Science tells us that only one in two thousand is by birth a pervert, a degenerate, a black sheep, born to be a sorrow to his people; and yet five hundred out of a thousand go wrong. Why? Invariably through violation of their healthy instincts, nearly always a thwarting of the natural desire to have some fun, setting the stamp of crime on the God-implanted constructive instincts of the race.

Long ago Rousseau proclaimed this shocking and impious doctrine, “If it is natural, it is right”. But science and history have more than justified him since.

Only it is very hard at times to know what is natural. We are so overfed, overclad, and overled that oftentimes one gets better information by turning to simple savages who have neither catechism nor clothing insanities.

These are the thoughts and experiences that led to the formation of the Woodcraft Indians in 1902. We went along the line of outdoor life and play, with human instincts recognized as a power that may be enormously constructive under proper guidance; and many a boy that was evidently headed for jail in his wild desire for boisterous fun received all that his instincts craved, and yet made a sterling citizen. The movement grew rapidly. I needed a board of advisers. So by invitation Dr. Luther H. Gulick; E. M. Robinson of the Y.M.C.A.; James E. Sullivan, the athletic expert; Dr. Henry van Dyke; and others joined me. The movement was widely adopted by Chautauquas as well as boys’ and girls’ camps.

In 1904 I took it to England, but with little success. It needed adapting to English surroundings. In 1906 I met General Baden-Powell there, and he accepted a place on the board of advisers. From the first he was keenly interested, and proceeded to adapt it to British conditions.

On October 31, 1906, Baden-Powell sent me an advance notice of the Boy Scouts that he purposed to develop in England and added, “You will see that our principles seem practically identical, except that mine does not ..text continues 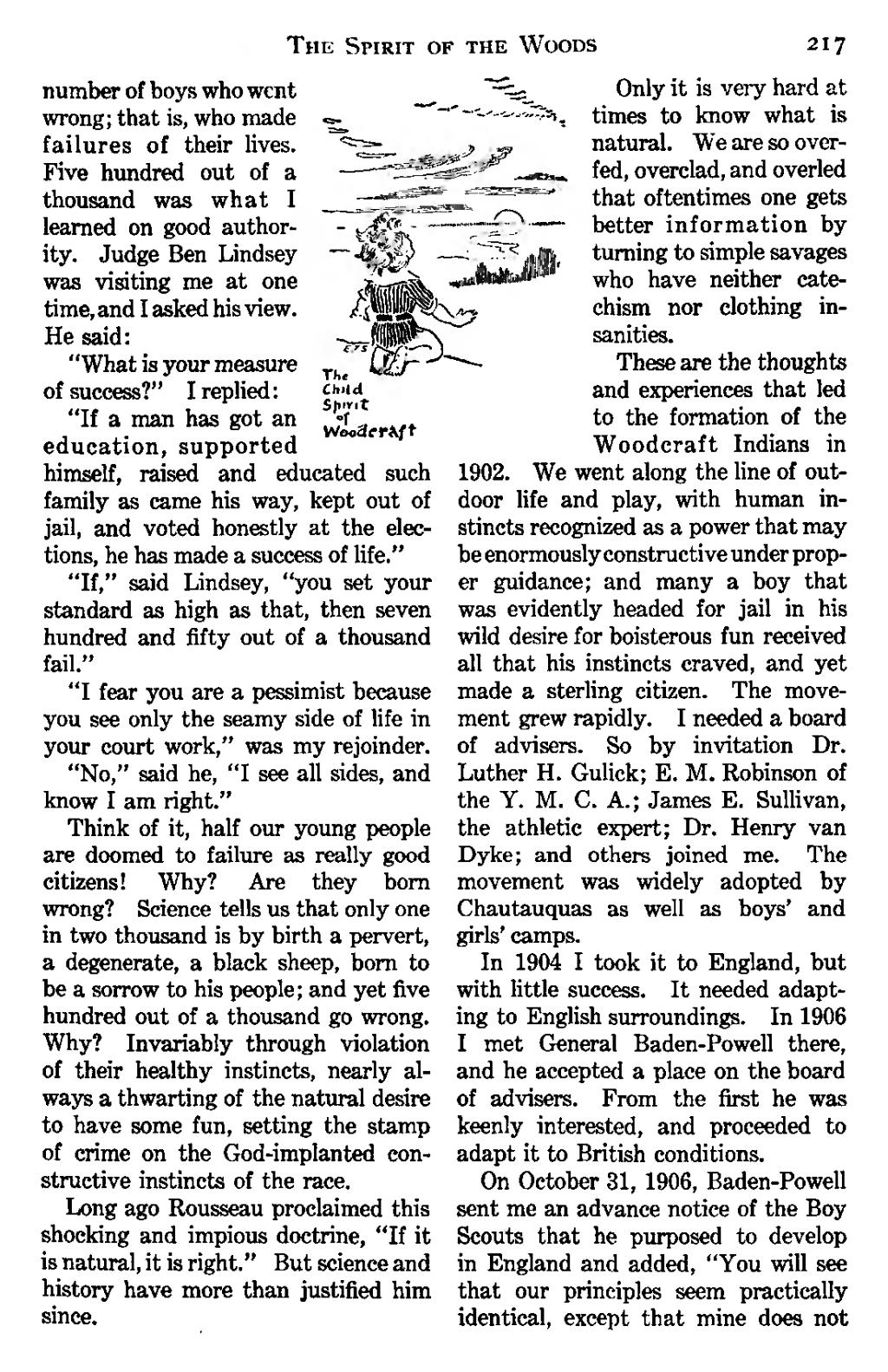