instincts are a mighty power, in the main constructive, but under evil guidance possibly destructive, a superb wild horse that must be harnessed and trained to bit and bridle, not crushed.

Instincts had been my own intellectual salvation, just as instincts have been the saviors of the race. I saw my own boyhood now in clear retrospect. I was taught, and I thought, that I was a freak. I know now that I was merely a healthy, normal boy rebelling against an unhealthy, abnormal environment.

As far as I am personally concerned, this “pilgrim’s progress” from inhibition to instinct is a thing of the far past. It was a personal fight. I fought it single-handed. I won, but not until eighteen years of my life had been lived under the shadow of the preachment that I ought to distrust my natural and healthy instincts. We have moved fast and far since then toward a saner and more gracious appreciation of human nature, but multiplied thousands of young Americans to-day face the problem I faced then – the problem of cutting through artificialities to a normal and healthy life of body and spirit.

I have always been impressed by the spiritual waste of those first eighteen repressed and distorted years of my life. I covet for all boys and girls some short cut to the things I had to learn slowly and painfully. Over twenty-five years ago I found myself asking, “Is n’t there some way to dramatize this religion, this education, this life of the out-of-doors which has, indeed, meant life to me?” I wanted to help boys and girls find that short cut. The upshot of this questioning was the Woodcraft idea of which the editor has asked me to tell in this paper.

The Seedling of Knowledge

I was seeking to give this Woodcraft idea acceptable form when I chanced to meet Rudyard Kipling at Frank N. Doubleday’s house.

Kipling heard my story with tense interest and said:

“If you don’t succeed, the Chinamen will be sitting astride our necks within fifty years. How are you going about it?”

“I am writing a dictionary of Woodcraft”, was the answer.

“Oh, bosh! Who would ever read a dictionary?” he said.

“What would you do?”

“Oh, I see; maybe you are right”, I answered. So I wrote “The Two Little Savages”.

“Far overloaded with information”, said Kipling after reading it.

“Then write another novel.”

So I wrote “Rolf in the Woods”, and still so much was left unsaid that I published the “Book of Woodcraft”, after all, and then every year for eighteen years the “Birch Bark Roll”, now the “Manual of the Woodcraft League”.

And this is the creed set forth: a religion is a way of life. This is my way of life, the Woodcraft way. It was the trail by which my fathers came up from being mere brutes, and it is the trail that will lead to the greatest heights. It is not new, it is the oldest way of all, but it has been buried in rubbish and forgotten.

Long ago I collected statistics on the ..text continues 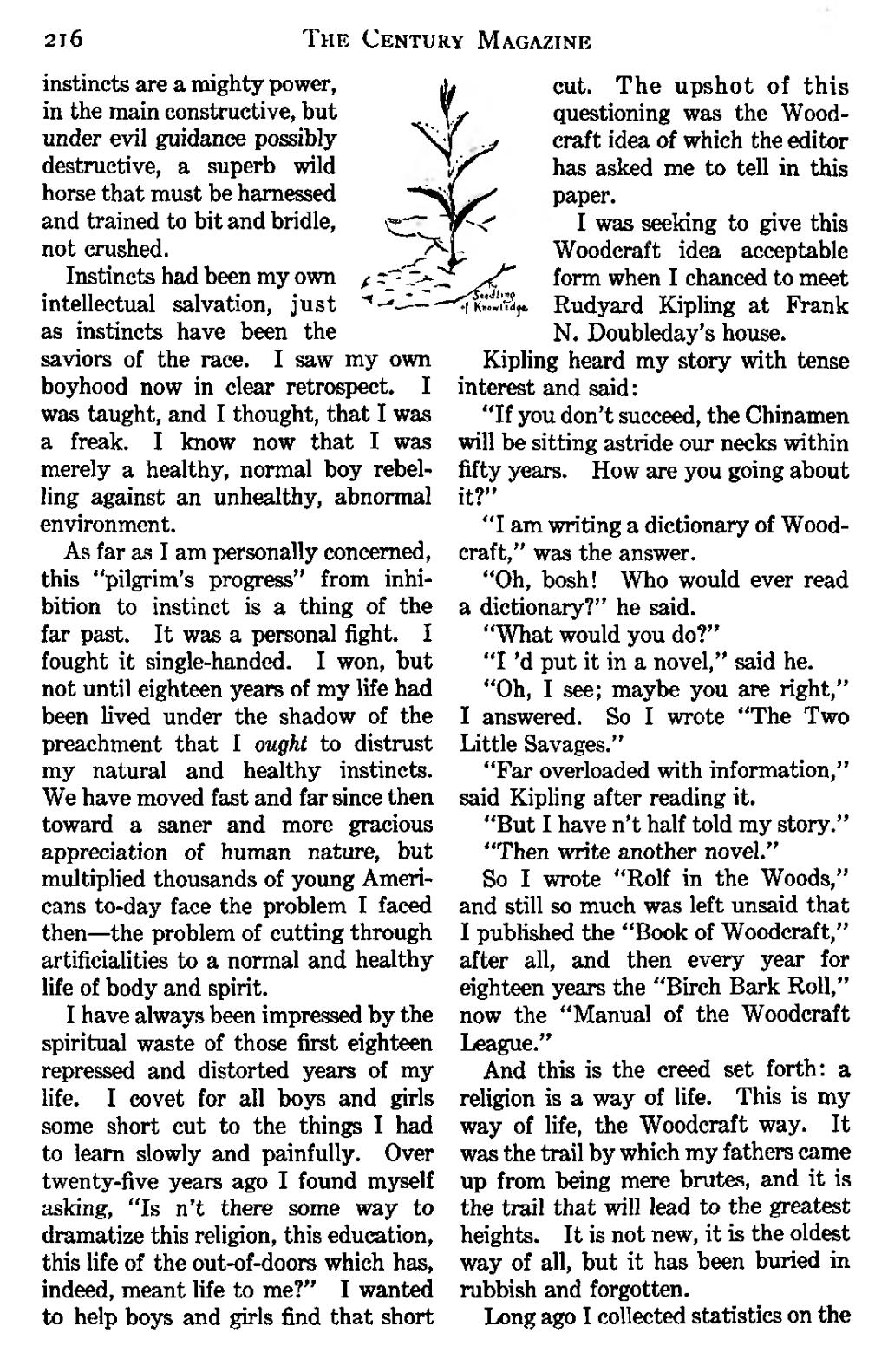