journey, not necessarily consecutive, and using three dif- ferent hitches, for grand coup. I-II Take entire charge of a horse or mule, including catch- ing, during 10 days of wilderness travel. Hobbles and bell allowed, but no picketing, for coup. Take such care of one horse for 30 days or ﬁve horses for 15 days, and put a shoe on a horse, mule, or burro ﬁve times for grand coup. I-II Catch 10 different horses in a corral with 10 throws of the lasso, for coup. Catch ﬁve horses on the range with 10 throws of the lasso, for grand coup. I—II Catch a horse or beef by each of his forefeet in turn, for coup. Catch him by each of his forefeet with four successive throws of the lasso for grand coup. I-II Make a serviceable pair of kyacks, or side-panniers, of rawhide or canvas reinforced with leather, and make a pack saddle which will ﬁt some particular animal, for coup. Add to this the breechings and breasting needed to hold it in place, all properly ﬁtted, and make a pair of serviceable, strong-lined hobbles, for grand coup. III Make a comfortable pack harness which will carry 50 pounds for coup. If, in addition, this be properly ﬁtted with breast straps and tump line, and used by self daily for two weeks (not necessarily successive), carrying not less than 30 pounds, grand coup. Not open to those under 18. III Pack two burros or pack animals with equipment, per- sonal or otherwise, not less than 100 pounds, and transport by trail through mountains to destination of not less than four miles, for coup. D0 same three times for grand coup. I-II Ride a horse one mile in three minutes, clearing a four- foot hurdle and a 10-foot water jump, coup. Do it in two minutes clearing a ﬁve-foot hurdle and a 15-foot water jump, grand coup. I Rope your mount out of a bunch without swinging the rope and in not more than three throws, bridle him prop- erly, the whole to be done in not more than one minute, coup. Catch your horse as above, but with only one throw, saddle and ride him 20 miles, the whole to be within 21/2 hours and the horse brought back in good condition at the ﬁnish, for grand coup. I-II Pick up a hat from the ground while at full gallop on a 68 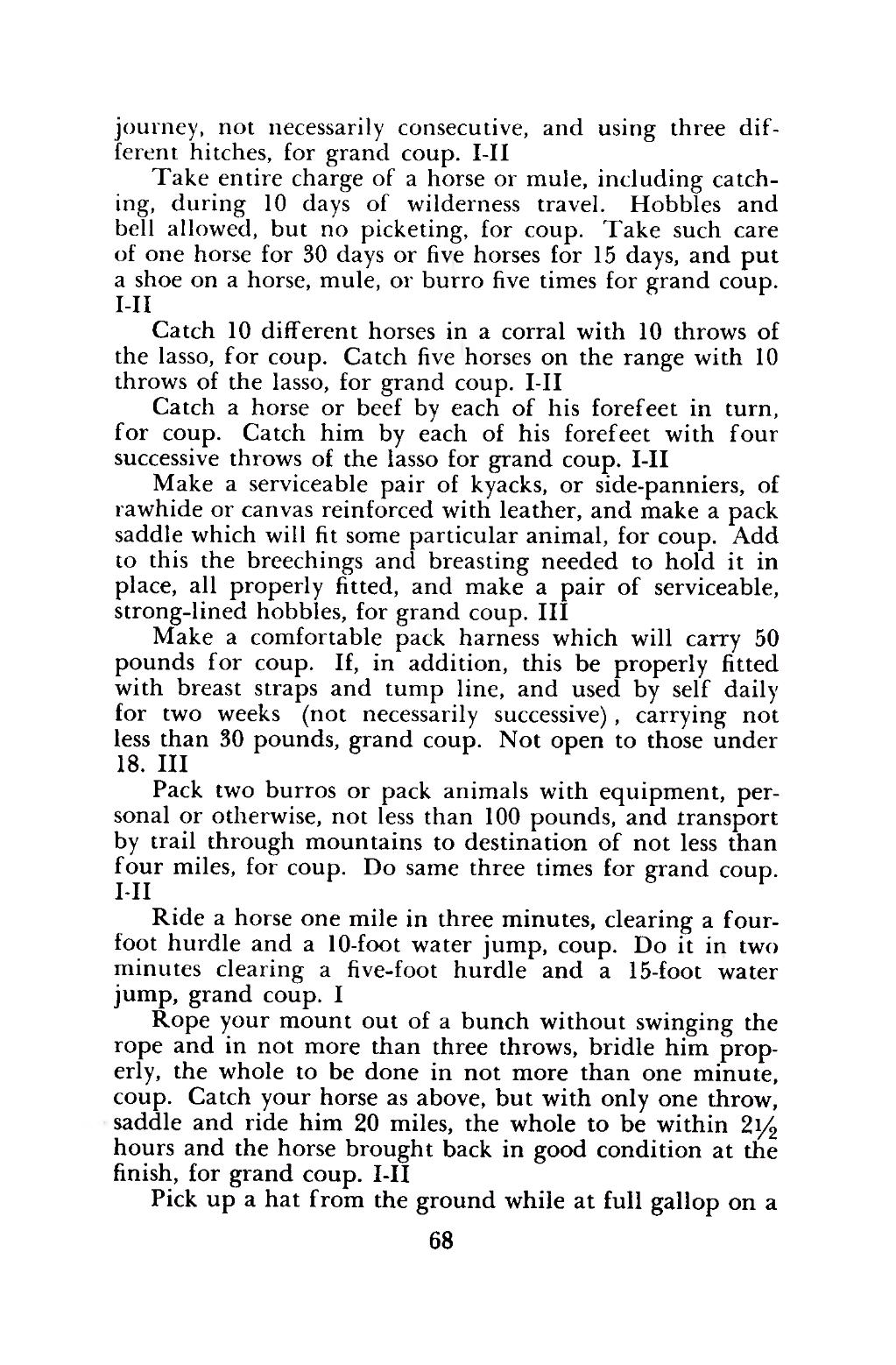