When brought into some new group such as the school or club, one is naturally anxious to begin by making a good impression on the others, by showing what one can do, proving what one is made of, and by making clear one’s seriousness in asking to be enrolled. So also those who form the group wish to know whether the newcomer is made of good stuff, and is likely to be a valuable addition to their number. The result is what we call initiation trials, the testing of the newcomer.

The desire to initiate and be initiated is a very ancient, deep-laid impulse. Whenever one tries to suppress it by regulations, it becomes secret and dangerous. Handled judiciously and under the direction of a competent adult guide, it becomes a powerful force for character building, for inculcating self-control.

In Woodcraft, we carefully select for these tryouts a test to demonstrate the character and ability of the newcomer, and the initiation becomes a real proof of fortitude, so that the new boy is as keen to face the trial, as the Tribe he would enter is to give it.

The trial should be something bearing on the candidate’s besetting sin. It should be incapable of causing injury. It should be approved by the Council. The following have been used with success, but are mere suggestions:

1 Silence. Keep absolute silence for six hours during the daytime in camp, while freely mixing with the life of the camp. In the city, keep silence from after school till bedtime.

2 Keep good-natured. Keep absolutely unruﬂied, for one day of twelve hours, giving a smiling answer to all.

3 Exact obedience. For one week, give prompt, smiling obedience to parents, teachers, and those who have authority over you. This must be certiﬁed to by those in question.

4 Make a useful woodcraft article, such as a basket, a bench, a bed, a bow, a set of ﬁre-sticks, etc.

5 Sleep out, without a built roof overhead, for seven nights consecutively, or 30, not consecutively. (Sleeping porch allowed by special permission of Council.)

6 Business Test. Bring to a given place at a given time, two (or more) willow rods exactly alike, straight, peeled and smooth, of a stated length. If a minute late, ..text continues 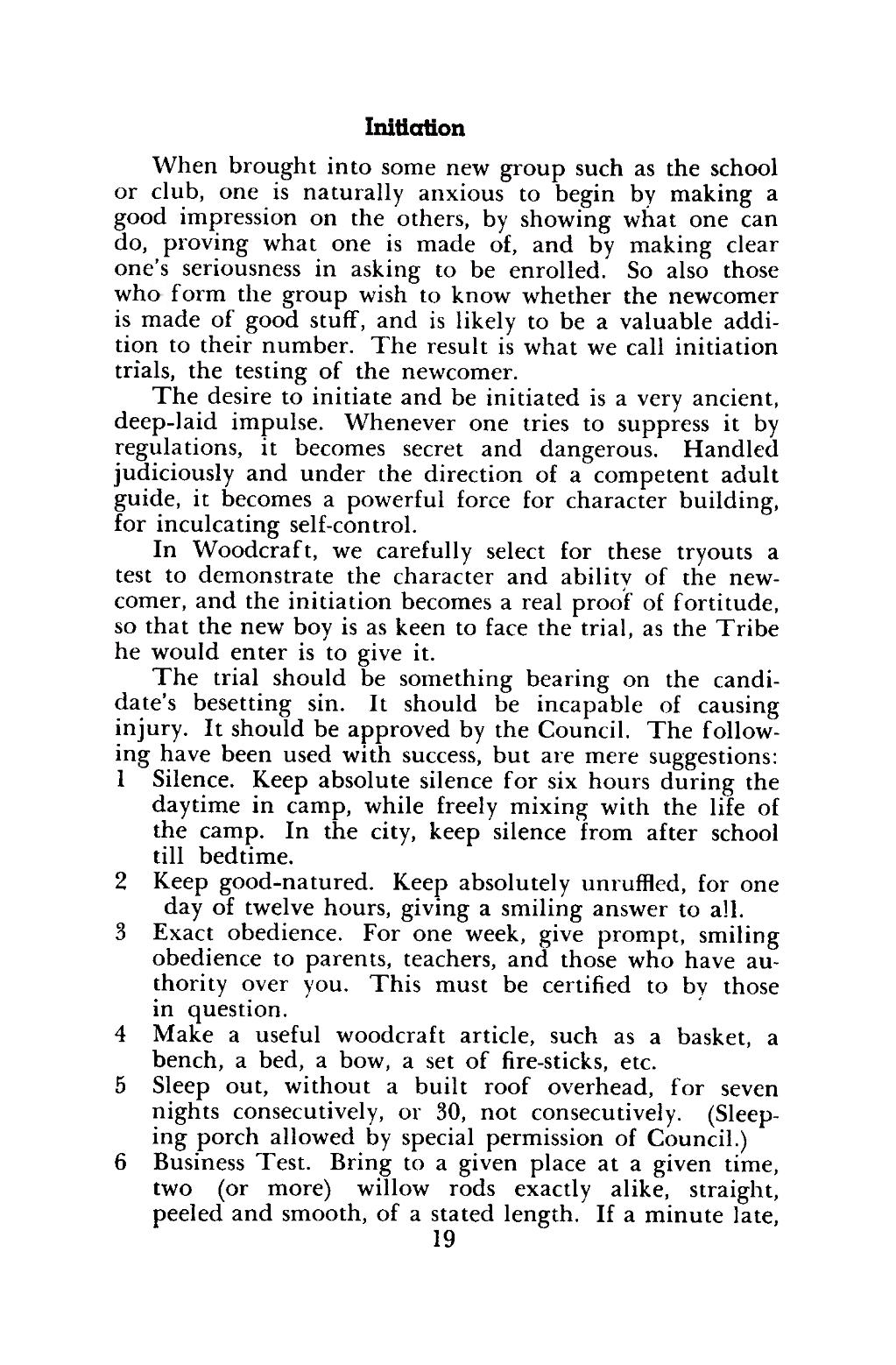